Review: Niche Niche Is a Manhattan Chameleon Where the Food and Wine List Change Every Night

There’s more than a little magic at Niche Niche, a curious two-month-old restaurant in New York’s SoHo district.
BYAdam Erace
May 5, 2019, 11:00 AM UTC 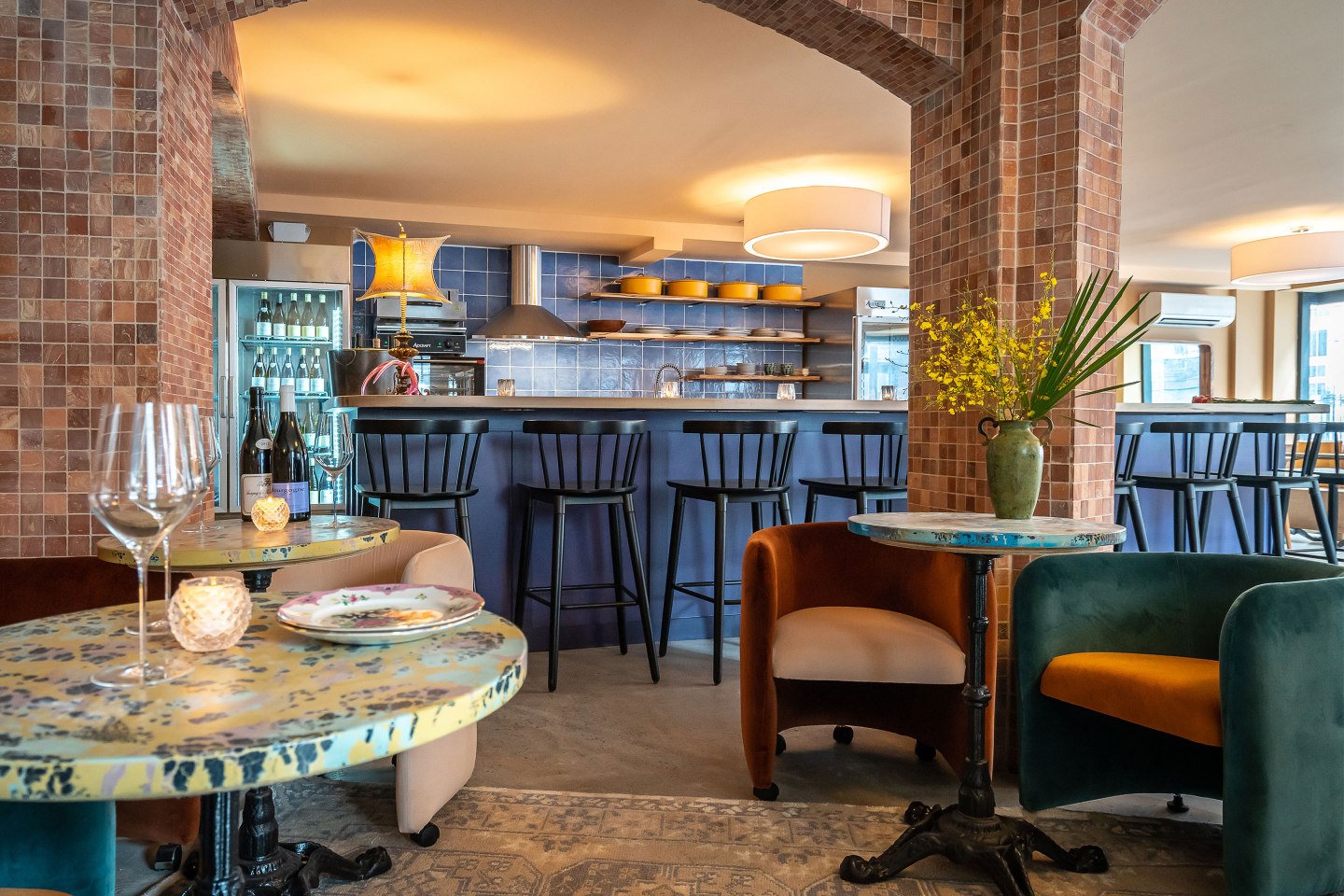 The semi-cooked chocolate dessert slouched in the bowl like a kid not wanting to get called on in class. Fresh whipped cream and grated bittersweet chocolate capped the confection’s dark, amorphous dunes and waves, the final plate in a four-course pre-fixe at Niche Niche, a curious two-month-old restaurant in New York’s SoHo. Was it a molten cake? A mousse? A fallen soufflé? The night’s menu sat behind me, written on a long rectangular mirror in what looked like silver lipstick. I turned around to check, but the striving early evening light streaming in from the windows of this corner storefront made the words shimmer and twist like enchanted hieroglyphics.

There’s more than a little magic at Niche Niche. How else does Ariel Arce, the owner and host of this charming enterprise, pull off throwing a dinner party for 40 with a new food menu and new wine menu every single night, twice a night?

Here’s the elevator pitch: For $80, you get four courses paired with four wines chosen by the evening’s co-hosts, usually one of Arce’s wine industry pals. Seatings are at 6:00 p.m. and 8:00 p.m. After 10:00 p.m., Niche Niche opens to the public for wine and snacks. Special Club, a live music lounge in the basement, opens this summer.

I can’t think of any other restaurant with this kind of breakneck programming. Every night is like the annual “Restaurant Wars” episode on Top Chef for co-chefs Zachary Fabian, who has been cooking at Arce’s other Lower Manhattan hangouts—Tokyo Record Bar and Airs Champagne Parlor—for two years, and Aaron Lirette, formerly of GreenRiver and Free Rein in Chicago. The pair develops the menus during weekly brainstorming sessions with Arce and the wine partners, tailoring the food to the bottles in regard to geography (Italian with Italian) or expression, like a Japanese menu for a suite of light, crisp whites. The night of the chocolate mystery, Lirette (he and Fabian alternate cooking) was running with a French menu, and the second I stepped into the restaurant, the first greeting I received—even before an affable welcome from Arce—was the luscious aroma of crackling roasted duck.

The warm, homey aroma matches the interior design, whose lived-in details (tortoiseshell flatware, cane furniture, ceramics by CB2 and Grannies, Inc.) balance a Scandinavian backdrop of blonde wood and wishbone chairs. Set with hand-blown glasses by Zalto, a king among kings of stemware, the marbleized concrete tables are especially cool, resembling the spotted hides of a psychedelic metallic animal. A shared snack platter is the first course to land on them. Mine included prosciutto, Piave cow’s milk cheese and a gooey, triple-crème cheese, marinated olives, cornichons, zingy apple mostarda, cheesy chive butter, and the airiest squares of focaccia. The bread is the only item Lirette and Fabian repeat night to night, and nobody should be mad about it.

Not Your Typical Wine Tasting

“Natural wine is farming first, farming always,” says John Connolly, general manager of the acclaimed neo-bistro Frenchette, from the center of the dining room, holding a bottle of Loire Valley Sauvignon Blanc pétillant-naturel. The ascendant category—generally (but not legally) defined as wine made with organic grapes and minimal human intervention—is currently showcased at Frenchette, a short stroll down Sixth Avenue from Niche Niche.

Arce posts her roster of wine partners a month in advance. The calendar includes winemakers, importers, sommeliers, writers, so, “Not only do the [wines] change, but the perspective on wine changes as well,” she says. “Some people keep it regionally specific—wines from South Africa or Greece. Sometimes the wines are tied heavily into the restaurant somebody works at. Then we have people who are just like, ‘I want to show you what I’m drinking right now.’”

While the style and educational content varies co-host to co-host, Niche Niche is definitely not selling a formal tasting experience. It’s more about the sybaritic and social aspects of enjoying wine because, as the website states, “Wine should be fucking fun.”

Connolly and Arce roamed the room with open bottles, refilling empties all night. When I crushed the sprightly pét-nat (produced by new winemakers from old vines at Maison Brulée) before the first course arrived, there was more. “Some people drink more, some people drink less,” Arce shrugs. “It all becomes an average. We just keep topping off until we run out of our allotment.”

I balanced the extra pét-nat with less of the next bottle, the weird, steely, saline Pearl Morisette Métis Blanc chardonnay from the Canadian side of Niagara Falls, which Lirette paired with a textbook Lyonnaise salad whose bacon lardons seasoned the entire bowl of greens with smoke and salt. When I went to splash some water in my glass to clear it before the next wine, Connelly poured a mouthful of Domaine les Fauvettes “From Dawn to Dawn” Burgundy, which turned lilac upon hitting the leftover chardonnay. “Don’t rinse with water, rinse with wine,” Connelly said, and after doing as instructed, he poured a full glass of the pinot noir, my notes for which exclaim in all caps, “BUBBLEGUM.”

The wine’s bright, fragrant, juicy fruit character balanced the fat and umami of the roasted duck breast I had been smelling all night. The duck had crispy amber skin and rosy flesh, which Lirette flavored with nothing more than salt, black pepper, and sweet-and-sour sherry vinegar gastrique. Served with bitter roasted escarole and a homey rosemary-and-thyme-scented potato gratin, it was a zero-ego dish—one that reminds you what a singular pleasure it is to eat simple, well-prepared food.

Czech winemaker Richard Stávek’s Vesely Oranzove was originally slated for serving with the duck, but Arce made a last-minute swap and pushed it to dessert. “This is Italian Riesling and probably 100 other grapes,” said Connolly, filling glasses with the unfiltered skin-contact blend. (For the record, those grapes include Gruner and Malvasia, as well as some lesser known Eastern European types like Neuberger and Müller-Thurgau.) Hazy and orange, like an August sunset, it tasted like breakfast in a damp French barn after a rainstorm, brioche toast and citrus marmalade and wild yeast and pollen swirling around in the rafters.

The whirr of twin stand mixers manned by Lirette’s sous chef entered the soundtrack of clinking glasses and silverware. She was whipping cream to order to finish the chocolate desserts, which arrived a minute later. After failing to classify it, I went in. Parts were airy like a mousse. Others had the crispy-chewy quality of brownie corners. Still others were on the border of batter. Later, after the sun went all the way down, I could see the menu described it as a soufflé. But it was unlike any chocolate soufflé I’ve ever had.

Pairings are often pleasant enough, but it’s the rare and special combination that makes the food and the wine taste better, taste greater than the sum of their parts. This was that. The intensity of the chocolate buried the wine’s top notes of toast and wood and funk, distilling it to a sparkling expression of grapefruit. It was as if the wine revealed a message Lirette had tattooed on the soufflé in invisible ink. It made the dessert taste like the zest of an entire grapefruit had been added to the batter.

“Pink grapefruit,” the woman at the next table pointed out, and you know what, she was exactly right. And in the next moment, we were yammering about the knockout pairing like new friends at a dinner party, which is what Arce intended all along.