On this little island prison in Italy, Lamberto Frescobaldi helps inmates get back on their feet through winemaking.
BYStephanie Cain
October 27, 2019, 11:00 AM UTC 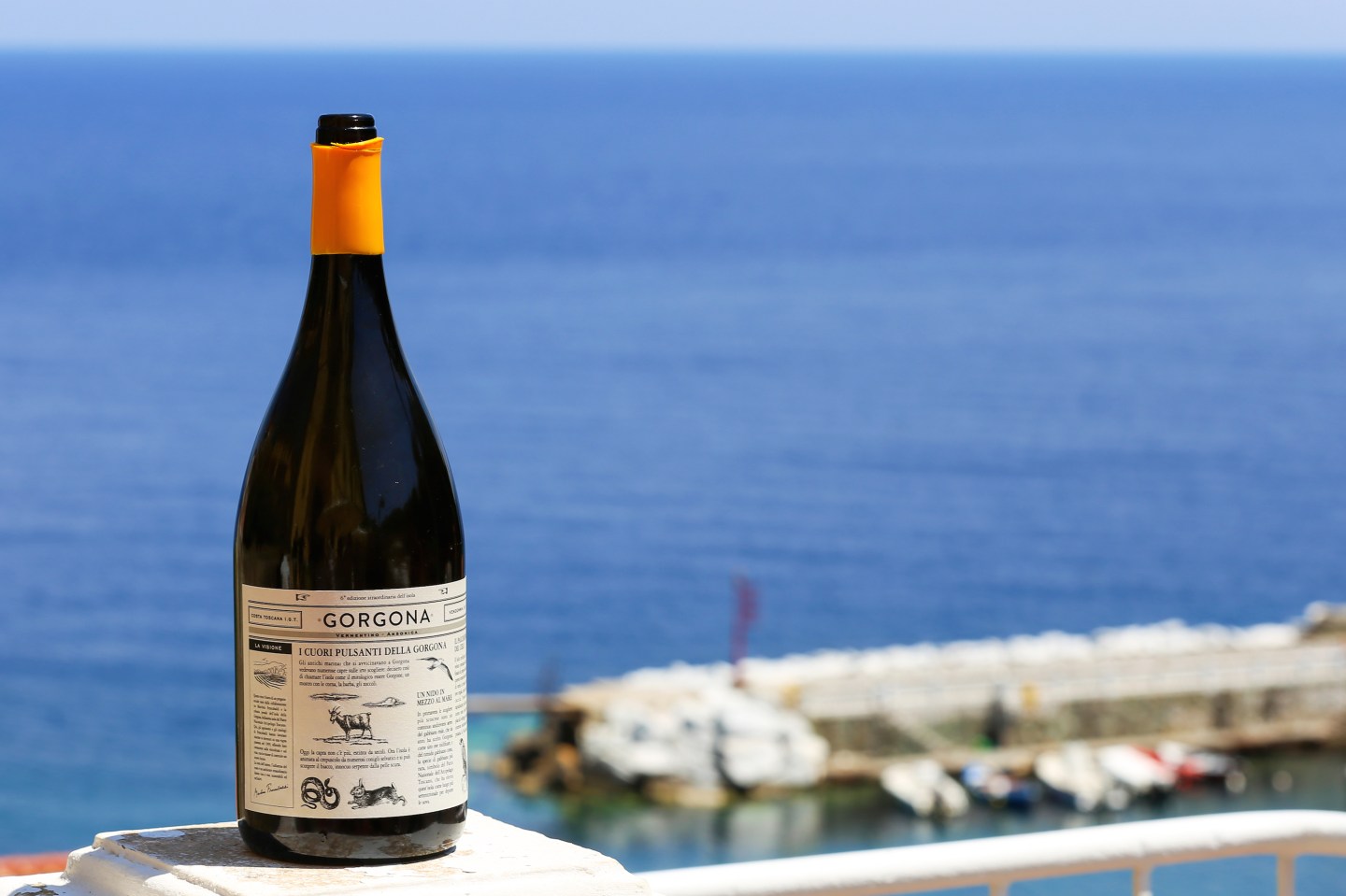 “Gorgona” is the white wine born from the collaboration of Frescobaldi and the island's penal institution.
Frescobaldi Group

Some prisoners cook meals. Others do laundry, sort books at the library, or enter data in computer systems. At Gorgona, they make wine.

The northernmost island in the Tuscan archipelago off the western coast of Italy, Gorgona is home to the prison of the same name. The island is small—just one square mile—and so is the prison, holding around 100 inmates. The area is physically beautiful, and so are parts of the prison. It was a monastery in the Middle Ages, and some of the medieval architecture still stands. The prison grounds include a small vineyard.

This is where Lamberto Frescobaldi, president of Frescobaldi Group and the 13th generation to oversee the family’s collection of wineries in Italy, runs his passion project: teaching inmates the basics of viticulture and winemaking. The program allows them to collect employable skills as well as sock away savings for their eventual release. They also make a respectable white wine, a blend of Vermentino and Ansonica, that’s even sold in the United States.

“People view things as white and black, but it’s not this way; there is a lot of color in between,” says Frescobaldi. “One day these people are going to leave [prison]. We have to accept that they do not stay there forever. If [an inmate] leaves angry, they’ll turn to crime again. Instead, we have to give these people the opportunity to not fail again, to not turn to crime again.”

None of it would be possible if Gorgona weren’t a different sort of prison. Unlike most prisons in Italy, Gorgona allows inmates to roam free on the island’s grounds, returning at curfew for lockdown. It’s not that they didn’t commit serious crimes. Many are there for murder and drug rings. But the island’s 20-mile distance from the mainland makes getting away extremely challenging. In fact, no one has ever escaped. Guards also stalk the island and manage the docks. A boat comes only once a week to drop off goods, and it doesn’t even sail up to the marina. Guards shuttle out to the vessel.

The inmates are, however, at Gorgona because they have shown exemplary behavior during their sentence. This affords them the privilege of Gorgona’s open air, sunlight, and outdoor chores, like working in the vineyards and olive groves.

This is what inspired Frescobaldi to be involved in a wine project on the island. He admits it wasn’t his idea; someone from the prison reached out to him about doing something with the two hectares of vineyards located there. He took a trip to the island in 2012 to meet with the director, and it was a conversation with an inmate that really sealed the deal for him. After tasting the wine they had been making, an inmate asked Frescobaldi for his critique.

“I started telling him my thoughts, and then he said, ‘But why did you spit it?’” Frescobaldi says, referring to the typical exercise by winemakers of spitting the wines as they taste through numerous tanks. He then explained to the inmate the difference between tasting and drinking. “He looked into my eyes and said, ‘I need to learn a lot of things from you.’”

Everything is done on the island, including pressing the grapes, fermenting the juice in stainless steel vats, and aging the wine in oak barrels. They even bottle on site. Then Frescobaldi sends a boat to pick up the sealed bottles and transport them to the distribution center on the mainland. The current release is the 2014 vintage.

Frescobaldi works with and trains inmates at Gorgona, an island prison off the coast of Italy, in viticulture and winemaking so that upon their release, they are employable citizens.
Frescobaldi Group

The wine can hold its own. The inmates employ organic farming techniques in the vineyards, which include sandy, well-drained soils in an area sheltered from strong marine winds. The resulting white wine is mineral-forward on the palate with high acidity and crispness that makes it easy drinking on a warm day. For some, it may be hard to imagine that the work of prisoners went into the beauty of this wine, but that is exactly what Frescobaldi loves about the project. The inmates aren’t defined by what they did, but instead, how they want to be moving forward.

The money from the sale of the wine goes directly back to the program too. Frescobaldi says the program is not yet self-sustaining, but it’s on its way. In the meantime, he has helped set up the facility for success by planting additional vines, shipping in equipment—no easy task to get materials to the island, he adds—and restoring some of the ancient buildings in the village. The expansion will allow them to make more wine, and in turn, hire more inmates for the Gorgona wine label.

The project started seven years ago but has grown to include vineyards at the prison site, where inmates tend to vines and produce a limited-edition white wine from Vermentino and Ansonica.
Frescobaldi Group

It’s also important to him to pay the inmates for their work and compensate them with a respectable sum. Frescobaldi says the inmates pocket 10,000 to 40,000 euros through the program, an amount that allows them to get back on their feet once they leave jail. “Being paid for what you do shows respect, for one,” Frescobaldi says.

It’s all part of the regeneration process. “Crime picks very poor people; if you’re not tempted to get $1,000, you likely won’t go back to jail,” he adds.

His attempts seem to be working. Like the U.S., the majority of Italians in prison land back in prison once they have been released, nearly 85 percent, says Frescobaldi. Programs like these, though, greatly diminish that number. Of those who have gone through his winemaking program, none who have been released have ended up back in jail.

Gorgona is the white wine born from the collaboration of Frescobaldi and the island’s penal institution.
Frescobaldi Group

Part of that success can be attributed to the program’s structure. Once prisoners are released, Frescobaldi doesn’t leave them hanging. They are offered a job working in the vineyards at one of the Frescobaldi wineries. Not all take him up on it, he says, but those who do work for one to two years. Just this summer, he had eight helping set up for harvest.

It’s certainly difficult for many to understand why he wants to help prisoners. To many Italians, prisoners are housed in penal colonies, run by the government, as a place to be penalized for their deeds. They do not deserve another chance. To Frescobaldi, though, they do warrant a shot at remaking their lives.

“We are giving these people the opportunity to see life again in a new way,” Frescobaldi says. “Sometimes success goes to our heads, but these kinds of experiences put your feet back on the ground.”

—Beer City: These women are at the forefront of Asheville’s explosive fermentation industry
—Michelob was really early to this whole marketing ‘beer as wellness’ trend
—Behind the scenes at the largest beer competition in the world
—Why this award-winning champagne maker is turning to sake