A brief history of dress codes in the workplace

In his new book 'Dress Codes: How the Laws of Fashion Made History', Richard Thompson Ford traces the death of suit, and unpacks the symbolism behind Silicon Valley’s new casual wear of hoodies and sweats.
BYRichard Thompson Ford
February 9, 2021, 3:00 PM UTC 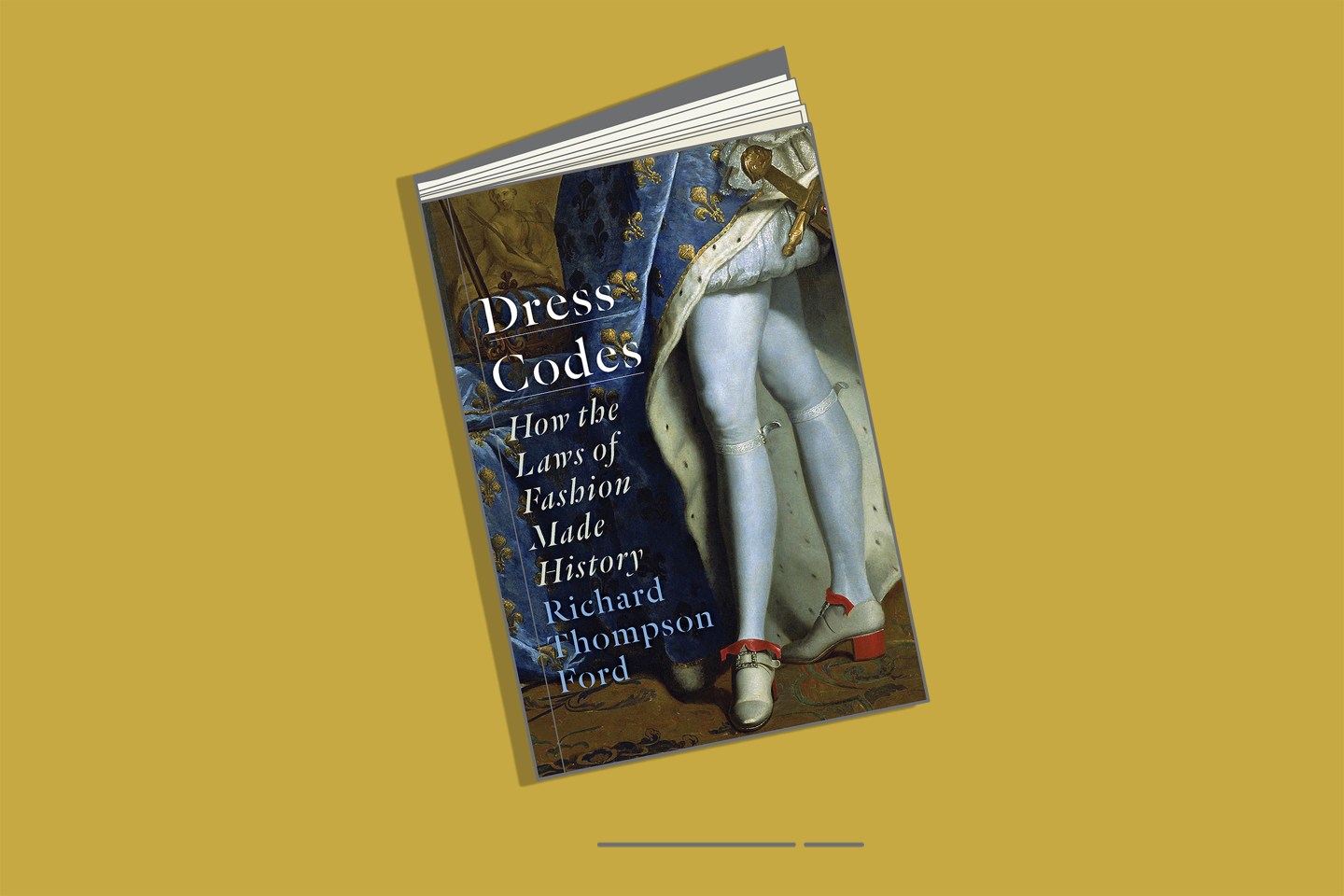 “Dress Codes: How the Laws of Fashion Made History”
Courtesy of Simon & Schuster

The business suit as we now know it started to take shape in the 18th century, when elite men began to abandon conspicuously opulent, aristocratic clothing such as velvet, fur, brocade, and jewelry in favor of a streamlined, sober, and practical wardrobe. The suit came to represent the Enlightenment ideals of social equality and reason; the moral values of sobriety, thrift, and modesty; and the civic virtues of industriousness and practicality. Expressive fashions have been used to symbolize social status, political affiliation, individual personality, and, of course, gender for centuries.

In my book, Dress Codes: How the Laws of Fashion Made History, I look at laws, workplace rules, and social customs that concern what we wear and what our clothing signifies. The suit and the dress codes surrounding it are a perfect contemporary example of how and why we control and ascribe meaning to our clothing.

The suit became the epitome of bourgeois masculine attire: Bank tellers and CEOs, file clerks and heads of state all wore some version of the suit. Of course, the suit still allows for status distinctions, but they are in subtler details of fabric, cut, and internal construction. In its popularity the suit makes an egalitarian statement, reflecting its origins as a rejection of the explicit status symbols of aristocratic dress. But for over a century it was also exclusively masculine.

For hundreds of years women still wore more opulent, adorned and highly class-differentiated clothing: In a sense, elite men continued to enjoy the older, opulent trappings of high status vicariously, through their wives, daughters, and mistresses. As women entered the professional workforce in greater numbers, they adapted elements of the suit to create a feminine professional wardrobe that, in recent years, has become almost as standardized and as accepted as the masculine suit—furthering its egalitarian potential.

The counterculture targeted the suit as a symbol of uptight, bourgeois conformity, and in today’s culture, which values individual authenticity above social cohesiveness, the suit is becoming unfashionable. The ethos of the Silicon Valley has played a large role here: The tech companies that emerged in the 1970s—such as Sun Microsystems, Oracle, and Microsoft, were founded by children of the 1960s and prided themselves on a relaxed and informal workplace where individual creativity could have free rein. As tech has come to influence the American and global economy, its sartorial norms have inspired change in even such old and hidebound professions as finance and legal services.

Accordingly, the familiar office dress code of professional attire is less and less common, especially in the high-status professions, where a casual ethos seems to allow for individual self-expression. Many see this as the end of dress codes. But if we look more closely, this new informality conceals a new dress code that can be as exacting as that of any mid–20th-century law office or Wall Street bank.

Below is an excerpt from my book Dress Codes: How the Laws of Fashion Made History, available Feb. 9.

Given…the changing nature of workplaces…in favor of a more casual environment, we believe this is the right time to move to a firmwide flexible dress code. Please dress in a manner that is consistent with your clients’ expectations. We trust you will consistently exercise good judgment in this regard. All of us know what is and is not appropriate for the workplace.

For decades, a business suit has been required attire for professionals in banking and finance. Indeed, some say that the thin stripes on a pinstripe suit were originally meant to represent the lines on an accounting ledger. The suit reflected seriousness and practicality; it conveyed a hierarchy of status. But in recent years suits have begun to fall out of favor. Goldman Sachs is far from the first firm to relegate the suit to ceremonial attire—indeed, it is one of the last. In March of 2019, the Wall Street Journal reported that sales of men’s suits had plummeted by 8% in the preceding four years.

Today’s high-finance world no longer values the prudence and sober judgment that the suit represents. Instead, it prizes innovation and daring; not a fair and modest return on investment but the aggressive pursuit of a windfall. Accordingly, a new generation of moneymen (they remain overwhelmingly men) have abandoned the suit. What began in the 1960s as “Aloha Fridays” and spread nationwide in the 1980s in the form of Casual Fridays has become a casual workweek dress code. Business casual is the new norm.

By most accounts, the new business-casual dress codes were designed to cater to the laid-back ethos of Silicon Valley, home to a growing share of investment bank clients. Today’s techie dress code—or anti–dress code—was born in the 1960s, when the New York–based International Business Machines Corporation was the stereotypical tech company. IBM epitomized the mid-century corporate bureaucracy: Its dress code required white shirts, black ties, and dark gray suits, suggesting employees were interchangeable parts of a well-calibrated machine. The small, scrappy software companies of Northern California brought a rebellious, hippie sensibility to tech, emphasizing flexible thinking and innovation over bureaucratic discipline. Intel, for instance, eliminated the layers of management typical of the 20th-century corporation and encouraged individual creativity and initiative: “There would be no dress codes, no hierarchies, no protocols.” Atari, Sun Microsystems, and, later, Microsoft all followed in this anti-bureaucratic mode. The elimination of professional dress codes went hand in glove with the individualistic ethos that these fledgling companies believed fostered innovation.

But a new, unwritten dress code quickly rose from the ashes of the old one. Tech entrepreneur Peter Thiel made this anti–dress code explicit in his 2014 book Zero to One, advising, “Never invest in a tech CEO that wears a suit.”

For all of their loudly announced opposition to corporate conformity, today’s technology companies aren’t exactly bastions of individuality. As he surveyed the crowd in downtown Palo Alto in 2014, software engineer Alexey Komissarouk told tech business reporter Queena Kim that he could tell whether someone worked in tech just by what they wore; in fact, he could even tell what kind of tech job each person had: “The engineers? T-shirt, jeans, and hoodies.” Another engineer agreed, “Hoodies signal young talent.” A zippered sweater worn over a button-down was the tribal garb of the venture capitalist. Software designers—the creative types in tech—could risk designer sweatshirts and selvedge denim—“the engineer’s outfit but with a bit more flair.”

According to Silicon Valley insiders, “in the fast-moving world of tech, the idea is to show you are not wasting precious time on something as vain as fashion.” When Yahoo CEO Marissa Mayer appeared in a 2013 Vogue magazine spread wearing a sapphire-blue Michael Kors dress and Yves Saint Laurent stiletto heels, Silicon Valley’s reaction was neither congratulatory nor indifferent; it was disapproving. One commentator summed up the indictment of Mayer’s fashionable ensemble, saying she “comes off as if she’s on vacation; she’s relaxing while everyone else is doing work.”

Similarly, Facebook founder Mark Zuckerberg, having become famous for a uniform of hoodie sweatshirt or gray T-shirt and flip-flops, was not content to simply enjoy his comfortable if uninspired wardrobe; he could not resist attributing moral significance to it:

I really want to clear my life to make it so that I have to make as few decisions as possible about anything except how to best serve this community [Facebook]. Making small decisions about what you wear, or what you eat for breakfast, or things like that…consume your energy. I’m not doing my job if I spend any of my energy on things that are silly or frivolous. That’s my reason for wearing a gray T-shirt every day.

Zuckerberg in his uniform of gray T-shirts embodied the ideal ethos of Silicon Valley: an unselfconscious nerd too busy obsessively designing tomorrow’s technology to worry about appearances. This has a naive charm. But if the CEO of the company thinks he isn’t doing his job if he spends any energy on the frivolous matter of attire, then what are we to think of the employee who arrives at work wearing a sharp tailored suit or a pair of high-heeled Louboutins? Purported indifference to appearance becomes a reason to judge based on appearance; a new dress code displaces an older one.

Indifference to fashion has become the hottest trend. A host of clothing stores and services now cater to the tech sector promising to take the work out of workwear, “so you can spend your time doing awesome guy stuff.” (One worries about what that might mean.) The BlackV Club, which specializes in…black V-neck T-shirts, markets its pricey cotton pullovers with the come-on, “You’re too busy to worry about clothes: The world’s most successful people don’t spend time choosing what to wear.”

The suit is a status symbol because it can also be a subtler expression of individual personality. Yet because of its long history as a symbol of professional competence and civic virtue, it has become an attractive option for people of all walks of life and both sexes. Accordingly, it has slowly lost its exclusivity. Ironically, because of its history as the default uniform of authority, privilege, and success, the suit has been re-tailored to fit a diversity of personalities and lifestyles. Despite its origins as a sign of exclusively masculine virtue, today’s suit is among the most egalitarian ensembles to emerge from over six centuries of Western fashion.

This, of course, is why the suit has begun to lose its preeminence.

Because it was re-tailored to send mixed and multiple messages and to fit almost everyone, the suit became unsuitable as a status symbol. In its place, the casual tech dress code, which suggests indifference to attire while also ascribing moral importance to it, has become the 21st century’s expression of professionalism. But this mandatory asceticism does not reflect intellectual depth or practicality. Rather it is a form of reverse snobbery and a symbol of a severe work ethic, stripped of its spiritual pretensions and embraced as a new secular morality.

Despite a noisy pretense of egalitarianism and practical-minded indifference, clothing today remains a sign of rank within a social hierarchy almost as elaborately stratified as that of Europe’s ancient regimes. Reverse snobbery takes the elitism of understatement to an extreme. Today’s dress codes have not renounced the hierarchical ordering and social etiquette of the past; instead they have refined it, making it more insidious than ever before.