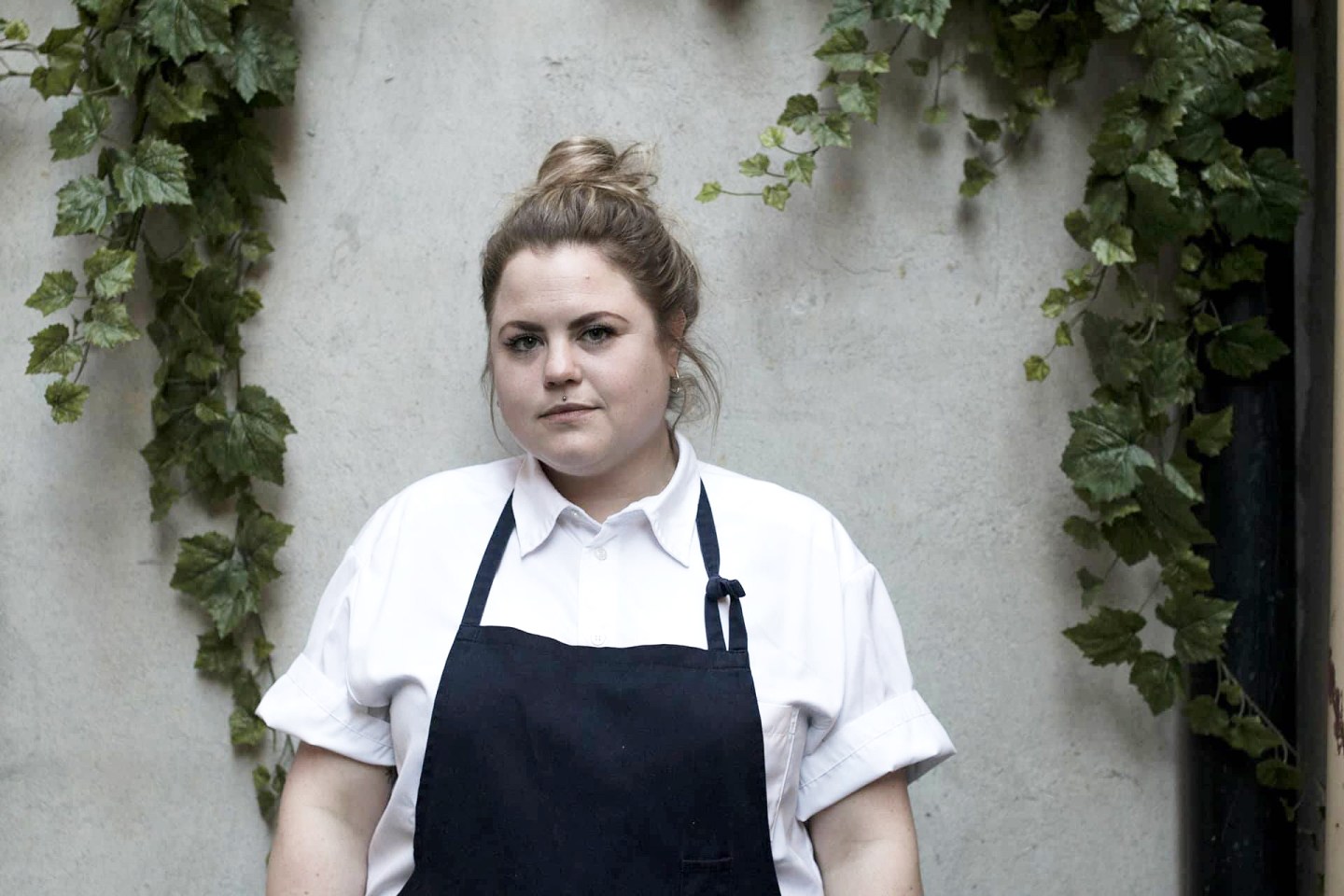 Reneé Fagerhøi is known for creations such as the freshest hand-dived scallop with grits and local ceviche sprinkled with pickled onions and popcorn.
Courtesy of Bula Neobistro

At the end of the meal, the Jell-O shots arrive.

Slices of bright lemon—the fruit removed and delicately replaced with jiggly, juicy rum and mojito Jell-O molded right onto the peel—are sitting atop a plate of crushed ice. They’re as elegant and dignified as Jell-O will ever be.

This final offering is an apt finale to dinner at Bula. The vibrant restaurant in Trondheim, Norway, is focused on ingredients, flavor, and, above all, fun.

The Nordic country’s third-largest city, with a population of just under 200,000, Trondheim is known for its outsize food scene. A host of excellent eateries tap into robust local ingredients including shellfish, game, and berries, with two restaurants awarded Michelin stars this year. (The city will host the dining guide’s Nordic countries 2020 star revelation event in February, with a dinner afterward at the newly reopened Britannia hotel.)

Reneé Fagerhøi opened Bula in 2017, not long after winning Top Chef Norway, but her vision for the restaurant took root long before then. Fagerhøi grew up on a biodynamic farm in Tønsberg, in the south of Norway, where, according to the chef, her daily diet served as early inspiration for her current menu long before she thought of becoming a chef.

“We ate mostly vegetarian food, and often very boring and bland food, like boiled beetroots and boiled buckwheat. So I was always dreaming about junk food: meat, hamburgers, and MSG,” she says, laughing.

Instead of going to culinary school, though, Fagerhøi studied gender theory at the University of Sussex in England. “Growing up, I never knew anybody who worked in the food industry, so I didn’t even think it could be possible to work with food,” the chef says. But she always loved cooking and eating, and when she did decide to change careers and pursue the culinary field, her gender theory background was crucial to building Bula.

“One of my goals was to be able to liberate myself from all the old male-dominated ideas of what a restaurant has to be like, how it has to be run and structured,” says Fagerhøi.

It’s clear on the surface from the moment you walk into the welcoming space and get a glimpse of the open kitchen, where the majority-female staff is heads-down, working in a way that seems at once exuberant and dead serious. It’s also evident in the choices the chef has made exactly what kind of restaurant Bula is. It’s a restaurant where meticulously executed dishes—like deer tartare in a hazelnut emulsion, or plump ceviche sprinkled with pickled onions and popcorn atop a crispy tostada—deliver vivid flavor and vague nostalgia. It’s also a restaurant where a claw-foot bathtub filled with ice keeps natural wine and local cider pairings cold, neon signs and dangling fairy lights illuminate the dining room, and restrooms are decked out in larger-than-life paintings of Jesus. In other words, it’s a restaurant that doesn’t take itself too seriously.

“I don’t try to copy the latest trends or think about how my cooking style can fit into the Michelin Guide,” she says. “I make what I feel is a part of my history. And then we get a little bit of punk, a little Dolly Parton—a gas station hotdog, a natural wine in the same pairing as a classic French, shaved ice with Fernet flavor—and a lot of rock and roll.”

Ingredients for her tasting menus come from the region and city (a recent dish featured diver scallop plucked from the water that morning), as well as from Fagerhøi’s own garden. “I love picking fruit and berries that we use for juice pairings, cocktails, and desserts,” she says. Bula’s beverages are as thoughtful as the menu too. The kitchen makes all the juices and syrups that go into the cocktails; tasting-menu pairings include dry hard ciders produced nearby; and there is a varied lineup of wines. “When it comes to wine, I try not to focus too much on a certain style but bring anything that is delicious to the table,” she explains.

Fagerhøi also wanted to make her own craft beer when she opened Bula, which she did in collaboration with Færder. The microbrewery is based in her hometown and is run by a mother and son team who, according to the chef, make the best craft lager in Norway. “I love squiffy British lager and Asian industrial pilsner, so that was my inspiration for the Bula pils,” she says.

Only the fanciest lemon Jell-O shots.
Courtesy of Bula Neobistro

The word bula is slang in Norwegian for a low-key place to eat, drink, and socialize, and the vibe at Fagerhøi’s restaurant is that, even if the dining experience is much more.

“I feel like the food at Bula is reflecting on the world today—it can shift from the most technical to the most simple, beautiful ingredients in one menu,” says the chef. “But mostly we just want to make food that tastes good. Flavor for me is everything. I love flavor.”