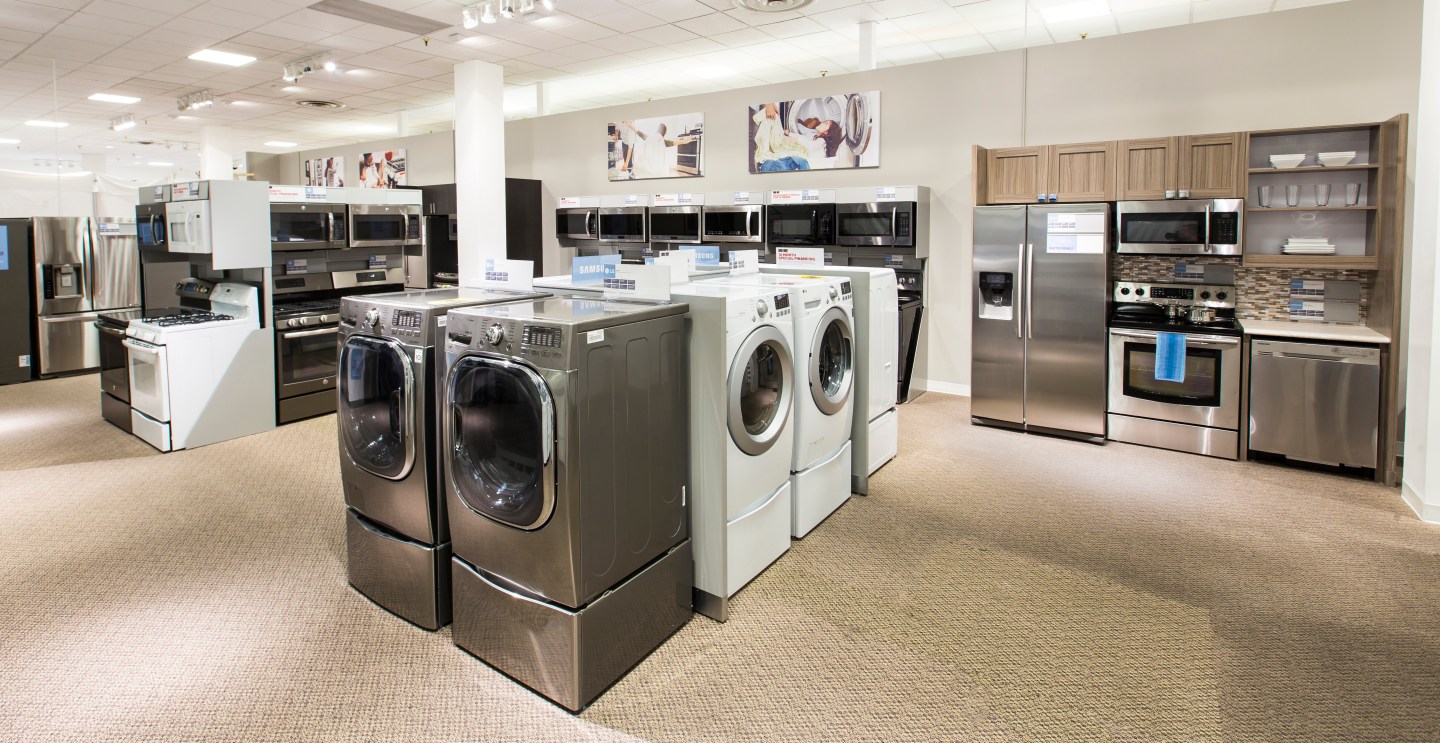 The retailer sees a big opportunity in the appliance business, and in Sears’ problems.

J.C. Penney (JCP) is diving deep into its past to help secure its future.

For the first time in 33 years, the department store will be selling home appliances like refrigerators and washing machines by General Electric (GE), Hotpoint, LG and Samsung, at 22 of its roughly 1,000 stores. If all goes well with the pilot, which begins Feb. 1 in stores in the San Antonio, San Diego and Tampa metro areas, Penney could roll out the home appliance offerings to hundreds more stores by October.

The return to home appliances is the first major new initiative by former Home Depot (HD) senior executive Marvin Ellison since he took the reins as chief executive officer last August, and one he is betting will help Penney build on its promising recent comeback. Penney’s comparable sales during the 2015 holiday season rose 3.9%, putting it on track for its ninth straight quarter of growth. Notably, Penney’s holiday results were a clear outperformance of department store rival Macy’s (M), which saw a big drop in sales.

Penney is gradually clawing back after a disastrous reinvention in 2012 that alienated its frugal core customers and cost it a third of its revenues. But for all of Penney’s progress, Wall Street only expects the retailer to clock in sales of $12.6 billion for the fiscal year ending this month. That is still more than $4 billion below their level four years ago.

Enter “Silver,” Penney’s internal code name for its appliance project. Penney sold appliances from 1963 to 1983 under its own brand, Penncrest, before abandoning the category to double down on its apparel business.

In an exclusive interview at Penney headquarters in Plano, Texas in early January, Ellison explained the decision to focus home appliances, a category he oversaw during his 12-year stint at Home Depot. In a third-party analysis of items that Penney customers searched for on jcp.com but were unable to buy there, appliances ranked number one.

“Over one-third of our customers buy appliances in the mall,” Ellison told Fortune, surrounded in a mock-up showroom by dozens of LG dishwashers, GE fridges and other such items. “But not from us.”

Instead, those shoppers are buying appliances at Sears, (SHLD) a department store with which Penney co-anchors 456 malls, according to Green Street Advisors. Though Sears Holdings, the parent company, remains the top retailer of home appliances in the United States, with sales of more than $4 billion last fiscal year, helped by leading brands including its own Kenmore line, Sears has been bleeding sales for years and has closed hundreds of stores.

So Penney sees a big opening in a home appliance industry Euromonitor International estimates had $29 billion in revenue in 2015, on the way to $38 billion by 2020. Ellison also wants to take advantage of the recovering housing market, which has led many people to shift spending away from department store staples like apparel and toward home improvement.

The appliances will range in price from $349 to $3,499, while the dedicated appliance sections on the sales floor will be between 1,500 square feet and 3,700 square feet. Penney plans to offer a much bigger assortment online once it makes appliances available for sale on jcp.com in May, said chief merchant John Tighe.

The “Silver” project will be closely watched by Penney investors because it will be the first major test of Ellison’s strategy, which eschews major makeovers in favor of Penney striving to be the best version of itself.

“We’re accepting the reality that we’re a mall retailer. It’s who we are,” he says. “Because of that, we’re going to try to win in the mall.”

And in those malls, one retailer in particular (read, Sears) has been “dominating” market share, Ellison said. He made a point of saying Penney is not taking on his alma mater, Home Depot, saying that the two retailers have very different customers and store locations.

Home is where the turnaround is

While J.C. Penney’s apparel business is largely back on track, and its e-commerce has begun to recover, one area is still lagging badly: its home goods department.

Penney was for eons the go-to retailer for its window treatments and blinds and household items like towels. But in 2014, Penney’s sales per square foot storewide were $155, compared to $212 before the failed reinvention. Most of that shortfall can be pegged to the home goods section, which in 2014 generated 12% of sales, down from 21% seven years earlier. Ellison is betting that big ticket items will be a relatively easy way to get a lot more out of those sections. (By some estimates, sales per square foot in stores that sell appliances reach $1,000 in that part of the store.)

Still, the sales hemorrhage of a few years ago, along with an enormous $5.2 billion long-term debt load, have left Penney handcuffed in terms of big capital projects. To make sure the new appliance business does not tie up what limited cash it has ($638 million as of October 31), Penney has arranged with GE, Samsung and LG not to hold any inventory beyond what it has on its sales floors. That approach, which departs from industry practices, is key to making this work for Penney, Ellison said. (GE just agreed to sell its appliance business to China’s Haier for $5.4 billion, though the GE brand will continue.)

Another benefit of the appliance foray? Penney is hoping having more big-ticket items will prompt a greater number of customers to sign up for store credit. Currently, some 36% of Penney’s sales are completed on a store card, way under the 60% rate at Kohl’s (KSS). That is depriving Penney of a lot of the data it wants on customer’s shopping habits. which helps with marketing and inventory planning.

Penney faces a number of challenges. For starters, it hasn’t sold appliances in such a long time that it shouldn’t expect customers to come instantly rushing back. What’s more, Amazon.com (AMZN), Home Depot and Lowe’s are formidable rivals. Penney also won’t be offering smart home products initially, potentially putting it at a disadvantage to rivals like Best Buy (BBY), Lowe’s and others (LOW), which have redoubled their efforts.

And stealing customers from Sears will be no slam dunk. Last year, Sears opened a new technology center in Seattle that (among other things) will mine data gleaned from the tens of millions of appliance service calls made by Sears technicians over the years; that move is intended to boost appliance sales by improving customer service.

Ellison is proceeding cautiously in how quickly and how far he’ll take the appliance business, given the fiasco that took place the last time Penney made major changes to its merchandise offerings.

“We’re not going to make a blind march to force something into the stores that is not working,” he says. “We’re going to listen to the customers. We’re going to read the data.”