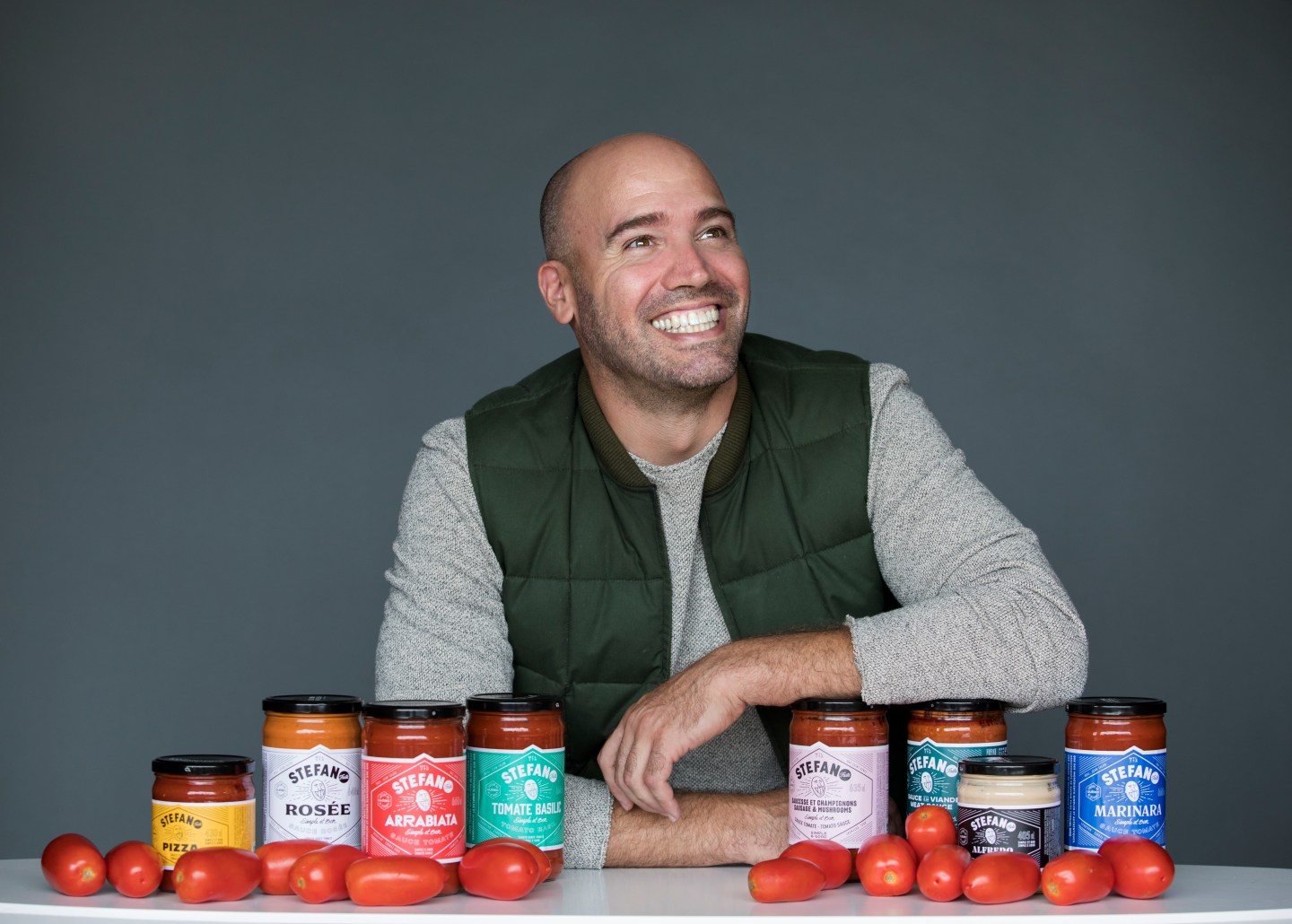 Stefano Faita’s million-watt smile is recognizable to most Quebecers with cable TV and a kitchen—and even those with neither. With three bestselling Italian cookbooks under his belt (en français), four busy restaurants in Montreal, and a starring role as host of the countryside roving table-to-farm show Arrive en Campagne, Faita is a household name in the province. His foray into retail has made him a familiar face in grocery aisles as well, where he’s been able to translate name power to shelf appeal with Stefano-branded frozen pizzas, sausages, and tomato sauce.

Now, in an unexpected turn of events, the Quebecois chef is hoping to make it big in Texas.

Faita and his restaurant partner Michele Forgione launched the Stefano line of tomato sauces with Canada’s second-largest food retailer, Sobeys, in Quebec in August 2017 and rolled out nationwide in July last year. “No way in hell were we thinking that we were going to the United States,” says Faita. “We thought maybe one day, but we said let’s get Quebec and Canada down pat, then let’s try to cross the border.” But when Texas-based supermarket chain H-E-B called their co-packer Lassonde Industries looking for a house-style tomato sauce brand, it was an opportunity Faita and Forgione couldn’t refuse.

They sent samples of their 10 sauce flavors—including tomato basil, alfredo, rosée, and primavera—to H-E-B head offices in San Antonio, and in short time six varieties were ordered for 185 stores by August. “We had to scramble to get our labels changed, because they’re bilingual, so we had to change them to only English,” explains Faita. Fortunately, Lassonde had the production capacity to accommodate the demand. Best known for producing Oasis, Allen’s, and Old Orchard juices, Lassonde, headquartered in Rougemont, Quebec, operates 14 locations in Canada and the United States.

Attaining a place on H-E-B’s shelves is no small distinction. The century-old supermarket operates 400 stores across Texas and Northern Mexico and has cultivated a cult following with its select brand offering, including its own private label that makes everything from That Green Sauce—a mild mix of jalapeños and poblanos—to Texas-shaped tortilla chips. Despite remaining lassoed within the borders of the Lone Star State, H-E-B ranks 20th on Kantar Consulting’s 2018 list of top-earning U.S. retailers with close to $24 billion in sales, a feat only Apple was able to top with fewer stores.

Among the grocer’s diverse range of passatas and coulis, Stefano Sauces shares retail space with H-E-B’s house brand and Rao’s of Harlem restaurant renown—a label Faita esteems in part because both are heirs to hard-earned legacies of Italian immigrants. Before attaining food-personality status, Faita cut his teeth behind the counter of Quincaillerie Dante, his family’s hardware store, and by assisting his mother at her cooking school Mezza Luna, which still offers canning, pasta, and other classes in Montreal’s Petite-Italie.

“We wanted to be the Rao’s of Canada,” says Faita. “Now we find ourselves on the same shelf as Rao’s, and we find ourselves a bit less expensive.” Ounce for ounce, Stefano sauces retail for one-to-two dollars less than Rao’s. Both sauces are made with Italian tomatoes and are gluten-free, with no added sugar, paste, or preservatives. “Our quality is as good—I’d probably say better,” he says.

Texas may seem like an odd fit for an Italian-French-Canadian who’s hawking sauce that’s not barbecue, but Faita has already received support from a sizable band of Quebecois expats and the Quebec Government Office in Houston, a consular outpost aimed at promoting bilateral trade and tourism between the province and the United States, which happens to be the largest importer and consumer of sauces in the world. For his part, Faita hopes to visit the state in October to run in-store demos and events. “I’m going to buy a cowboy hat and some cowboy boots and shoot some funny Instagram videos with our tomato sauces,” he says, laughing.

Faita acknowledges that his Quebecois notoriety may not translate to Texans, but he shrugs it off with his trademark grin. “Even if people don’t know who I am in the TV world, the sauce speaks for itself,” Faita says. “You taste the sauce and you understand.” He hopes to parlay H-E-B hoopla into more business north of the border, where his exclusivity deal with Sobeys ended Sept. 1. Agreements have already been signed with Metro, which will start stocking the sauces across Quebec in mid-October, and Provigo, where things are set to launch January 2020.

“For me the sauce is not about the money. Number one is to have the best sauce in Canada—that’s my goal,” he says. The rest, as they say, is gravy.

—Rwanda’s newest luxury safari lodge offers a plush sanctuary for your next getaway
—This tiny Caribbean island grows 44 types of mangoes
—This is where Oprah stays when she vacations at the Jersey Shore
—New Zealand’s hottest destination is one you’ve never heard of
—Listen to our audio briefing, Fortune 500 Daily
Follow Fortune on Flipboard to stay up-to-date on the latest news and analysis.