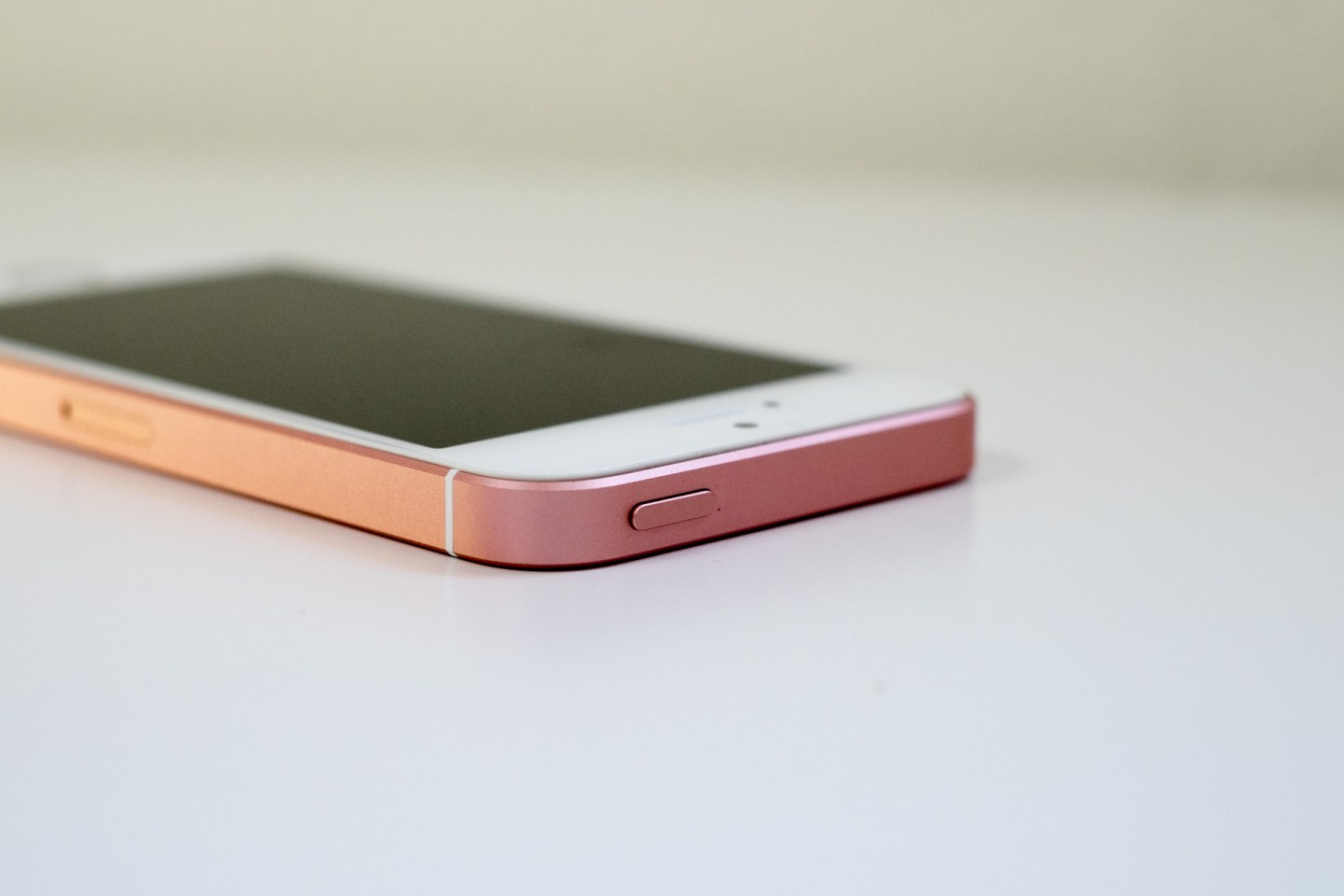 For nearly two weeks I’ve been using a rose gold iPhone SE as my primary phone. Not once during those two weeks have I been asked if I was using the new iPhone. In fact, whenever I pointed out that it was indeed Apple’s latest smartphone, I was met with a beleaguered look, followed by: “When did they announce that?”

Come September, when Apple (AAPL) usually unveils its latest and greatest iPhones, you can bet my inbox is full of questions about new features, pricing, and launch date. Not this time.

In some regards, the lackluster reaction to the iPhone SE—a smartphone that looks identical to a device Apple released over three years ago—is expected. Apple is the largest technology company in the world, one with seemingly unlimited resources and a sterling reputation for its design prowess. The thought of it releasing an iPhone with minimal external changes seems disappointing, at least on the surface, and news articles flirted with calling the model a failure the moment it launched.

But this iPhone wasn’t built for the customers who line up in front of Apple stores days in advance just to have the latest model. The $399 iPhone SE was built for people who continue to prefer the smaller proportions of the iPhone 5S or who simply seek a budget-friendly smartphone. (The iPhone 6 starts at $549 without contract; the 6S, $649.) An atypical model for Apple? Absolutely. But this break with convention makes business sense.

For more, read: “The New iPhone SE Is More Nostalgic Than You Think”

Shortly after Apple announced the iPhone SE, I had the chance to ask Phil Schiller, Apple’s senior vice president of worldwide marketing, the meaning of “SE” in the phone’s name, which deviates slightly from its previous “S” format. SE is an abbreviation for “Special Edition,” Schiller said, a name that, to him, recalled the Macintosh SE, a computer the company released in the late 1980s.

The nostalgia is well placed. The iPhone SE is virtually indistinguishable from an iPhone 5 but for a slight change in the chamfered edges of the device, which now have a matte finish. It’s available in silver, gray, gold, and pink—that is, “rose gold,” in Apple parlance.

If you owned an iPhone 5 or 5S, the familiarity when picking up the iPhone SE is immediate. Your index finger naturally finds the power button on top of the phone, which was later moved to the side of the larger iPhone 6 and 6S. The volume buttons and silence switch are right where you expect them, too.

Because the external measurements of the SE exactly match the older iPhone 5 line, cases and accessories are going to fit the newer phone as well, which should please those who are still clutching onto an iPhone 5.

It’s what’s on the inside that matters.

Apple used the same display and Touch ID sensor found on the iPhone 5S, as pointed out during iFixit’s teardown of the new device.

Thanks to the faster and more powerful processor, the iPhone SE never showed signs of slowing down. I’d even say the iPhone SE felt faster than the iPhone 6S I normally carry on a daily basis. Even when playing graphics-intensive games such as Asphalt 8, I never felt like the iPhone SE was underpowered.

One significant factor playing into the SE’s performance gains is the display. Apple, undoubtedly, designed the A9 chip to power the larger-screened iPhone 6S and 6S Plus smartphones without forfeiting performance. Rendering images, videos, and games on the larger screens require more computing power, translating to better performance on the smaller screen of the iPhone SE.

The downside is the iPhone SE’s display is the same as it was three years ago. It’s not horrible by any means, but it doesn’t offer the same quality as the iPhone 6S line.

Another benefit of using older display technology is improved battery life. The iPhone SE battery outlasts the iPhone 6S battery by roughly half a day. In other words, instead of having to charge the iPhone SE each night, I was able to wait until mid-afternoon on the second day before it required a charge. On one occasion, I was able to squeeze two full days of use out of a single charge.

My day typically starts shortly after 6 a.m., ending around 10 p.m. During that time, I’m checking Twitter, Facebook, email, updating apps, and browsing websites in Safari—all with an Apple Watch connected to the phone, pushing alerts to my wrist.

Frustratingly, Apple is still choosing to sell a smartphone with only 16 gigabytes of storage. Despite my best effort to justify such a low amount of storage last fall, 16 gigabytes just isn’t enough storage for a device in 2016, let alone one that’s capable of capturing high-quality photos and 4K video. For $399, you can purchase the 16GB version, while $100 more will quadruple the storage allotment to 64GB.

Without a doubt, the $499 iPhone SE is the device for most users.

I found the rear camera to offer the same experience as the iPhone 6S. Pictures tended to look true-to-life in terms of color replication and clarity, though it struggled in low-light conditions (as most smartphone cameras do).

Disappointingly, the front camera is stuck at 1.2 megapixels. Sure, it’s going to do an acceptable job at capturing selfies, but the overall performance isn’t going to be on par with the 5-megapixel camera found in the iPhone 6S.

Quite simply, some people still prefer to carry a smaller smartphone. The trend of the past two years of growing smartphone sizes has seen tremendous success, especially for Apple, which began offering 4.7-inch and 5.5-inch smartphones in late 2014. As Localytics reported after launch weekend for the iPhone SE, the iPhone 5S still holds 18% market share of iPhones in use. The iPhone 5 is the fifth most popular iPhone, according to the same report, with 7% market share.

In essence, 25% of current iPhone users use a device that’s nearly identical to the iPhone SE, and later this year, those users will find themselves at the next point in the two-year upgrade cycle. Instead of being forced into a larger device, they will have the option to maintain the same form factor, only with an improved overall experience.

Furthermore, during the iPhone SE announcement, Apple revealed it sold 30 million 4-inch iPhones in 2015. That’s not a number to just shrug off as insignificant. Look at BlackBerry, a company struggling to break one million units sold of its Priv smartphone last quarter.

Additionally, by continuing to use a off-the-shelf parts and pieces borrowed from its iPhone lineup, Apple is able to meet the $399 price tier—something we’d never seen from a company known for its premium price tags. With an aggressive price point, Apple is now able to compete with a slew of mid-range Android devices and enter markets such as India where smartphones are cheap.

At the end of my time using the iPhone SE, I���m torn. On one hand, the SE’s increased performance is something I would love to have in the iPhone 6S.

On the other hand, I just can’t adapt to using a smaller device. The transition from typing on the iPhone 6S to the iPhone SE took a few days, and even then, I still felt as if I was struggling to hit the digital keys well enough for auto-correct to at least make a guess of my intended word(s).

I’ve also grown fond of having more information displayed on the screen of my phone. With the smaller screen of the iPhone SE, I was forced to scroll and interact with an app or email more often than I do on the bigger iPhone 6S.

Over time, I’m sure I would adjust to downsizing. Truth be told, I’d be perfectly content with the smaller iPhone SE. But Apple is giving its users far more options than it has in the past—at least in terms of picking the iPhone that’s right for the person. For me, at least, the iPhone 6S is the right iPhone.

For many customers, the iPhone SE is going to be the right device. Judging by the current wait time for new iPhone SE orders, averaging two weeks when ordering through the Apple Store, the iPhone SE already is.