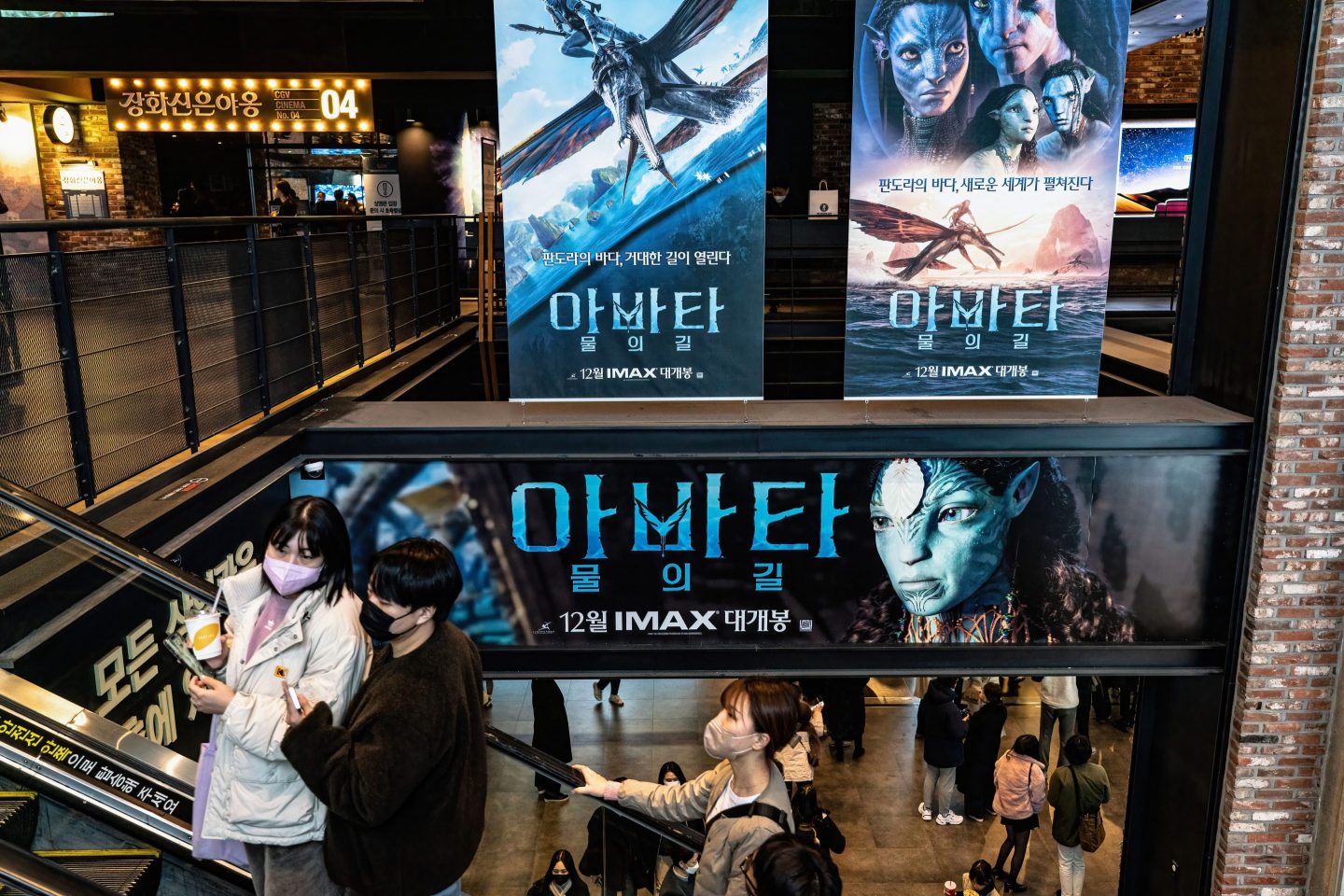 "Avatar: The Way of Water" signboards are displayed at a movie theater in Seoul in December.
Simon Shin—SOPA Images/LightRocket via Getty Images

James Cameron’s “Avatar: The Way of Water” led ticket sales in movie theaters for the sixth straight weekend, making it the first film to have such a sustained reign atop the box office since 2009’s “Avatar.”

The Walt Disney Co.’s “The Way of Water” added $19.7 million in U.S. and Canadian theaters over the weekend, according to studio estimates Sunday. Its global total has now surpassed $2 billion, putting it sixth all-time and just ahead of “Spider-Man: No Way Home.” Domestically, “The Way of Water” is up to $598 million. Continued robust international sales ($56.3 million for the weekend) has helped push the “Avatar” sequel to $2.024 billion worldwide.

A year ago, “Spider-Man: No Way Home” also topped the box office for six weekends, but did it over the course of seven weeks. You have to go back to Cameron’s original “Avatar” to find a movie that stayed No. 1 for such a long span. (“Avatar” ultimately topped out at seven weeks.) Before that, the only film in the past 25 years to manage the feat was another Cameron film; “Titanic” (1997) went undefeated for 15 weeks.

“The Way of Water” has now reached a target that Cameron himself set for the very expensive sequel. Ahead of its release, Cameron said becoming “the third or fourth highest-grossing film in history” was “your break even.”

The box-office domination for “The Way of Water” has been aided, in part, by a dearth of formidable challengers. The only new wide release from a major studio on the weekend was the thriller “Missing,” from Sony’s Screen Gems and Stage 6 Films. A low-budget sequel to 2018’s “Searching,” starring Storm Reid as a teenager seeking her missing mother, “Missing” plays out across computer screens. The film, budgeted at $7 million, debuted with $9.3 million.

January is typically a slow period in theaters, but a handful of strong-performing holdovers have helped prop up sales.

Though it didn’t open hugely in December, Universal Pictures’ “Puss in Boots: The Last Wish” has had long legs as one of the only family options in theaters over the last month. In its fifth week, it came in second place with $11.5 million domestically and $17.8 million overseas. The “Puss in Boots” sequel has grossed $297.5 million globally.

The creepy doll horror hit “M3gan,” also from Universal, has likewise continued to pull in moviegoers. It notched $9.8 million in its third week, bringing its domestic haul to $73.3 million.

And while the popularity of horror titles in theaters is nothing new, Sony Pictures’ “A Man Called Otto,” starring Tom Hanks, has flourished in a marketplace that’s been trying for adult-oriented dramas. The film, a remake of the Swedish film “A Man Called Ove,” about a retired man whose suicide plans are continually foiled by his neighbors, made $9 million in its second week of wide release. It’s taken in $35.3 million domestically through Sunday.