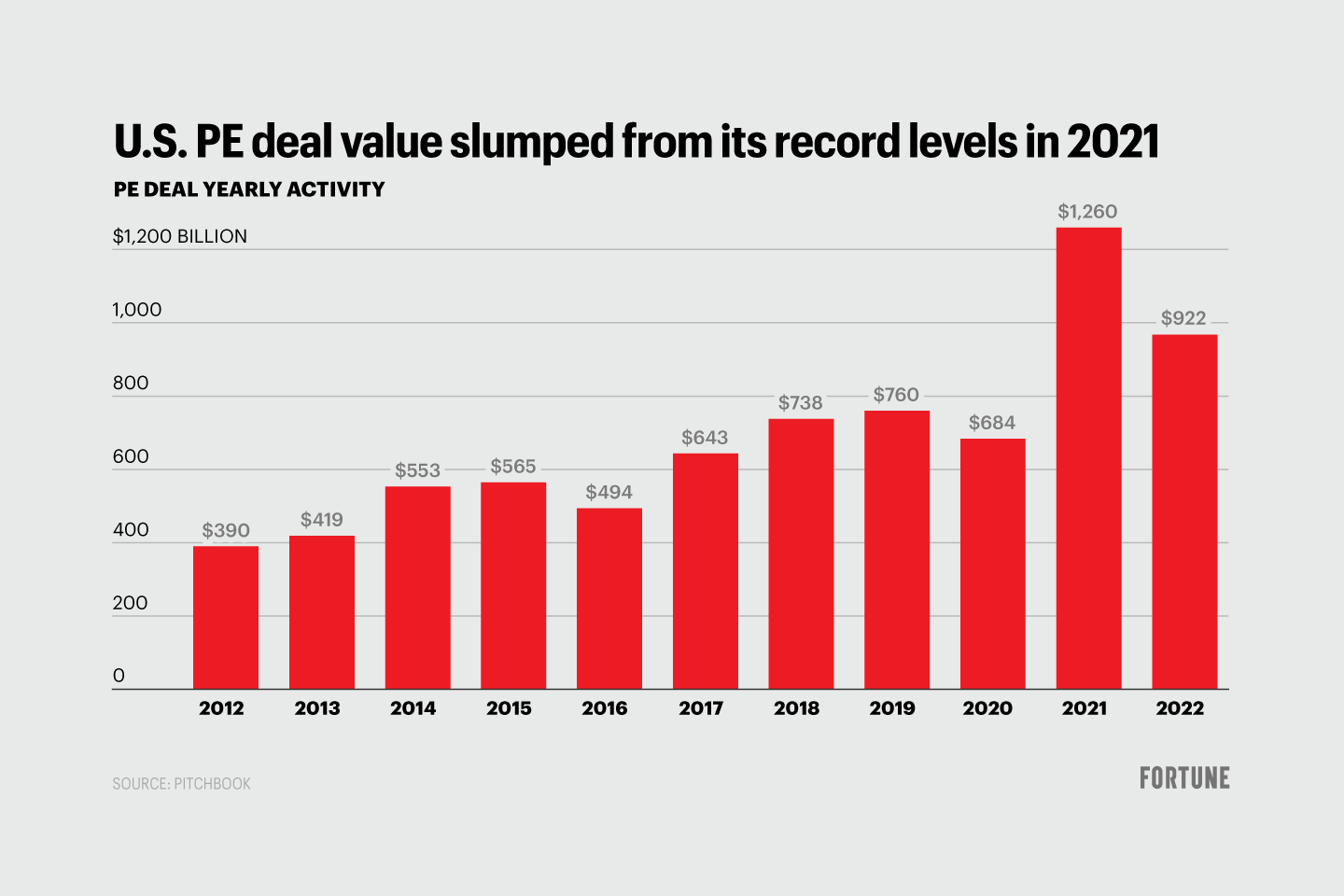 The downturn spares no one—even private equity. And after what some observers describe as a surprisingly resilient year in 2022, PE performance is starting to slump. But how bad is it?

Well, data-wise, private equity has held up relatively well—but in some areas, like exit activity and deal value, it’s beginning to crack under the weight of soaring interest rates from the Federal Reserve’s aggressive rate hikes.

On the bright side, the private equity “machine should have shut down [in 2022]. It didn’t, and for me, that was the big surprise,” Tim Clarke, a senior private equity analyst for data provider PitchBook, told me last week. We’re still seeing “very robust buying and fundraising activity—like, the second-highest ever.” Though the declining numbers last year weren’t a surprise to him, “My gosh, it’s very resilient.”

The not-so-great news? We’re starting to see all those pressures finally impact the PE space. Data for private equity performance lags, but thanks to PitchBook’s new annual report on the state of U.S. private equity, we can start to see some early trends: For the year, total U.S. PE deal count fell 2.4% while value dropped by nearly 20% from 2021, per PitchBook data. The important context here is that the value of deals last year still hit over $1 trillion—higher than 2019 levels (roughly $760 billion).

Valuation-wise, Jill Shaw, a managing director of endowments and foundations at Cambridge Associates, predicts, “We’ll see continued declines across the board,” and told me that some of the areas in PE that “haven’t been hit with declines to date,” like small and mid-cap versus large-cap buyouts, for example, will start to see a dent.

There are some bright spots: What impressed industry watchers like Clarke is that leveraged buyouts, or LBOs, didn’t drop off a cliff despite a big pullback in banks funding debt. “The main piston to the machine is the leveraged buyout—that's 50% to 60% of the dollar volume in any given year [in private equity]. And that should have shut down because the leveraged loan markets shut down,” he said. Instead, non-bank lenders (like private debt funds), which as Clarke notes are now often funds from PE firms themselves, “stepped in and almost replaced that bank market.”

But the area I think will be particularly interesting to watch is PE fundraising. When it comes to LPs getting their money back, patience has been, and will likely continue to be, the name of the game. Exits are dwindling: “Activity was sliding all year and now sits well below pre-COVID-19 levels,” the PitchBook report authors note. The IPO market, for one, was effectively slammed shut for most of 2022, and has few signs of reopening anytime soon; M&A exits, meanwhile, halved after a frenzied 2021, per PitchBook. Last year, PE firms exited 1,274 U.S. companies, which in total valued nearly $296 billion—roughly 28% and 66% lower, respectively, from 2021’s record-setting levels.

“That will be a continued irritant: [Fewer] exits mean less distributions going out the door, [and] that goodwill you built up of doing four years worth of exit value in one year is eventually going to fade,” argues Clarke of fund managers. He says he expects PE fundraising to drop below its historic average.

LPs were still funding PE firms’ massive coffers last year, though at a slowing pace, with 405 funds raising roughly $343 billion. That’s lower than 2021’s highs, but still above 2019’s fundraising pace, per PitchBook. The big factor impacting LPs in 2022 was the so-called denominator effect, where, because of the poorer performance of other assets like public stocks, the portion of LPs’ capital in private equity became overweight. And as the PitchBook report authors note, “a majority” of institutional LPs already allocated all of their 2022 PE capital as of the third quarter. That all means, “Many LPs [are] facing tough decisions regarding their allocations to the space in 2023.”

So, what can we make of last year? It was the “start of a downturn,” says Clarke. As for what 2023 brings, it’s looking like we’re in for a tough couple quarters.

- Skyward Specialty Insurance Group, a Houston-based property and casualty insurance company, plans to raise $134.29 million through the sale of 8.95 million shares priced at $15. It had previously planned to price shares between $14-16.