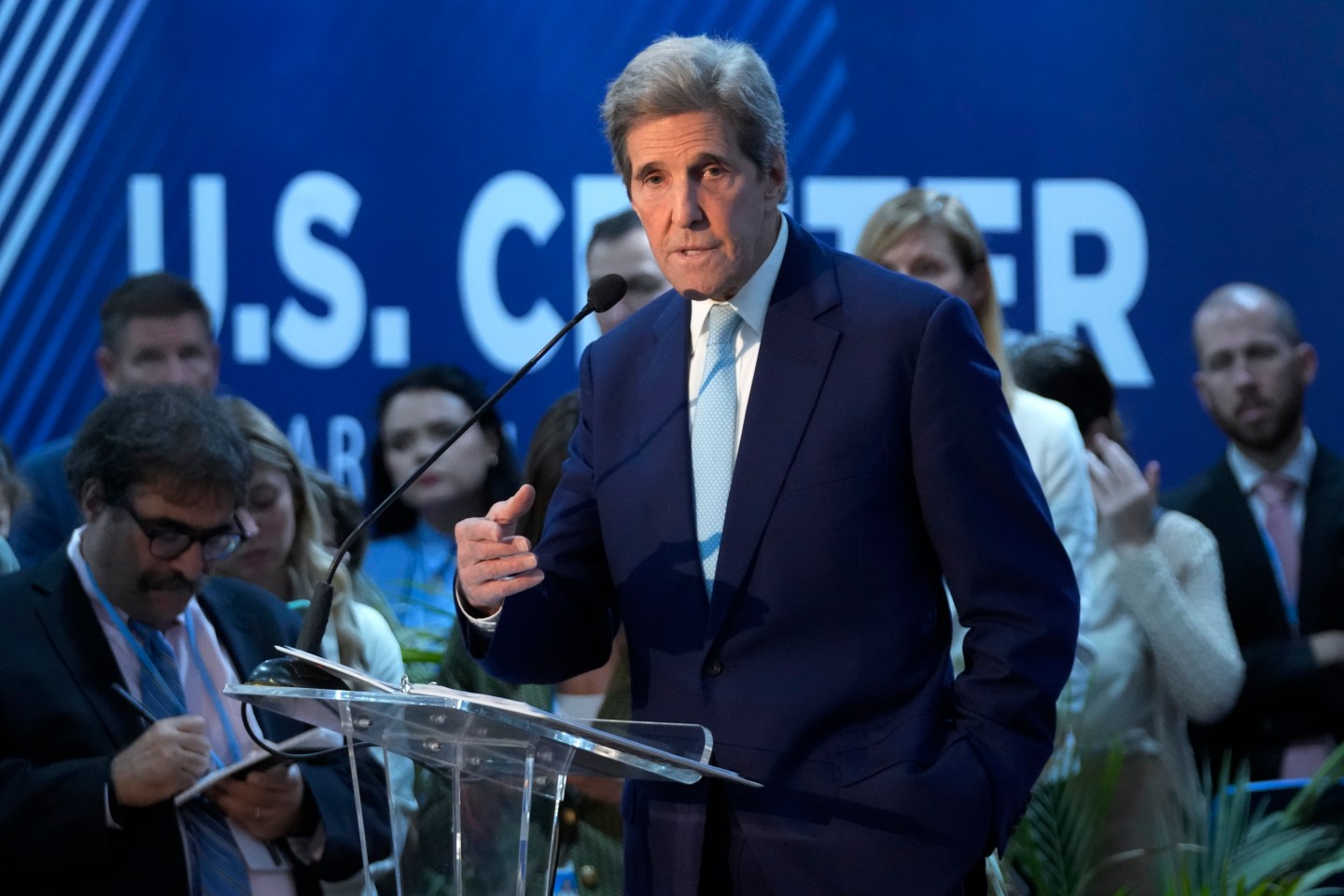 U.S. climate envoy John Kerry told The Associated Press on Jan. 15, 2023 that he backs the UAE's decision to appoint the CEO of a state-run oil company to preside over the upcoming U.N. climate negotiations in Dubai, citing his work on renewable energy projects.
Peter Dejong—AP

In an interview Sunday with The Associated Press, the former U.S. secretary of state acknowledged that the Emirates and other countries relying on fossil fuels to fund their state coffers face finding “some balance” ahead.

However, he dismissed the idea that Sultan al-Jaber’s appointment should be automatically disqualified due to him leading the Abu Dhabi National Oil Co. Activists, however, equated it to asking “arms dealers to lead peace talks” when authorities announced his nomination Thursday.

“I think that Dr. Sultan al-Jaber is a terrific choice because he is the head of the company. That company knows it needs to transition,” Kerry said after attending an energy conference in the Emirati capital. “He knows — and the leadership of the UAE is committed to transitioning.”

Still, Abu Dhabi plans to increase its production of crude oil from 4 million barrels a day up to 5 million even while the UAE promises to be carbon neutral by 2050 — a target that remains difficult to assess and one that the Emirates still hasn’t fully explained how it will reach.

Kerry pointed to a speech al-Jaber gave Saturday in Abu Dhabi, in which he called for the upcoming COP — or Conference of Parties — to move “from goals to getting it done across mitigation, adaptation, finance and loss and damage.” Al-Jaber also warned that the world “must be honest with ourselves about how much progress we have actually achieved, and how much further and faster we truly need to go.”

“He made it absolutely clear we’re not moving fast enough. We have to reduce emissions. We have to begin to accelerate this transition significantly,” Kerry said. “So I have great confidence that the right issues are going to be on the table, that they’re going to respond to them and lead countries to recognize their responsibility.”

Each year, the country hosting the U.N. negotiations nominates a person to chair the talks. Hosts typically pick a veteran diplomat as the talks can be incredibly difficult to steer between competing nations and their interests. The nominee’s position as “COP president” is confirmed by delegates at the start of the talks, usually without objections.

Al-Jaber is a trusted confidant of UAE leader Sheikh Mohammed bin Zayed Al Nahyan. He also led a once-ambitious project to erect a $22 billion “carbon-neutral” city on Abu Dhabi’s outskirts — an effort later pared back after the global financial crisis that struck the Emirates hard beginning in 2008. Today, he also serves as the chairman of Masdar, a clean energy company that grew out of the project.

Skepticism remains among activists over al-Jaber, however. A call by countries, including India and the United States, for a phase down of oil and natural gas never reached a public discussion during COP27 in the Egyptian resort of Sharm el-Sheikh in November.

Activists worry that COP being held in a Mideast nation reliant on fossil fuel sales for a second year in a row could see something similar happen in the Emirates.

Asked about that fear, Kerry said: “I don’t believe UAE was involved in changing that.”

“There’s going to be a level of scrutiny — and and I think that’s going to be very constructive,” the former U.S. senator and 2004 presidential contender said. “It’s going to help people, you know, stay on the line here.”

“I think this is a time, a new time of accountability,” he added.

Still, the Emirates and the U.S. maintain close military relations, regardless of the federation making policy decisions disliked by Washington.

Dubai’s Jebel Ali Port is the most-used port of call for the U.S. Navy outside of America. Some 3,500 American troops are deployed in the country, including at Abu Dhabi’s Al Dhafra Air Base and a Navy outpost in Fujairah. The UAE has some $29 billion in pending defense sales with the Americans, including purchasing its most-advanced air defense system known by the acronym THAAD.

For Europeans in particular, Russia’s war on Ukraine has led to a reckoning on the continent’s reliance of Moscow’s natural gas to heat their homes in the winter. Though aided by an unusually warm winter, Europeans are trying to source gas elsewhere while also looking for renewables to fill whatever gaps they can.

“No country is advantaged by having a petro-dictator be able to control their future and their prices and their economy with reckless behavior,” Kerry said, referring to Russian leader Vladimir Putin.

“To the degree there’s something that’s coming out of it that will change things for the better, that is Europe’s deep commitment to big reductions in emissions and to a whole shift in the nature of their energy supply,” Kerry said.