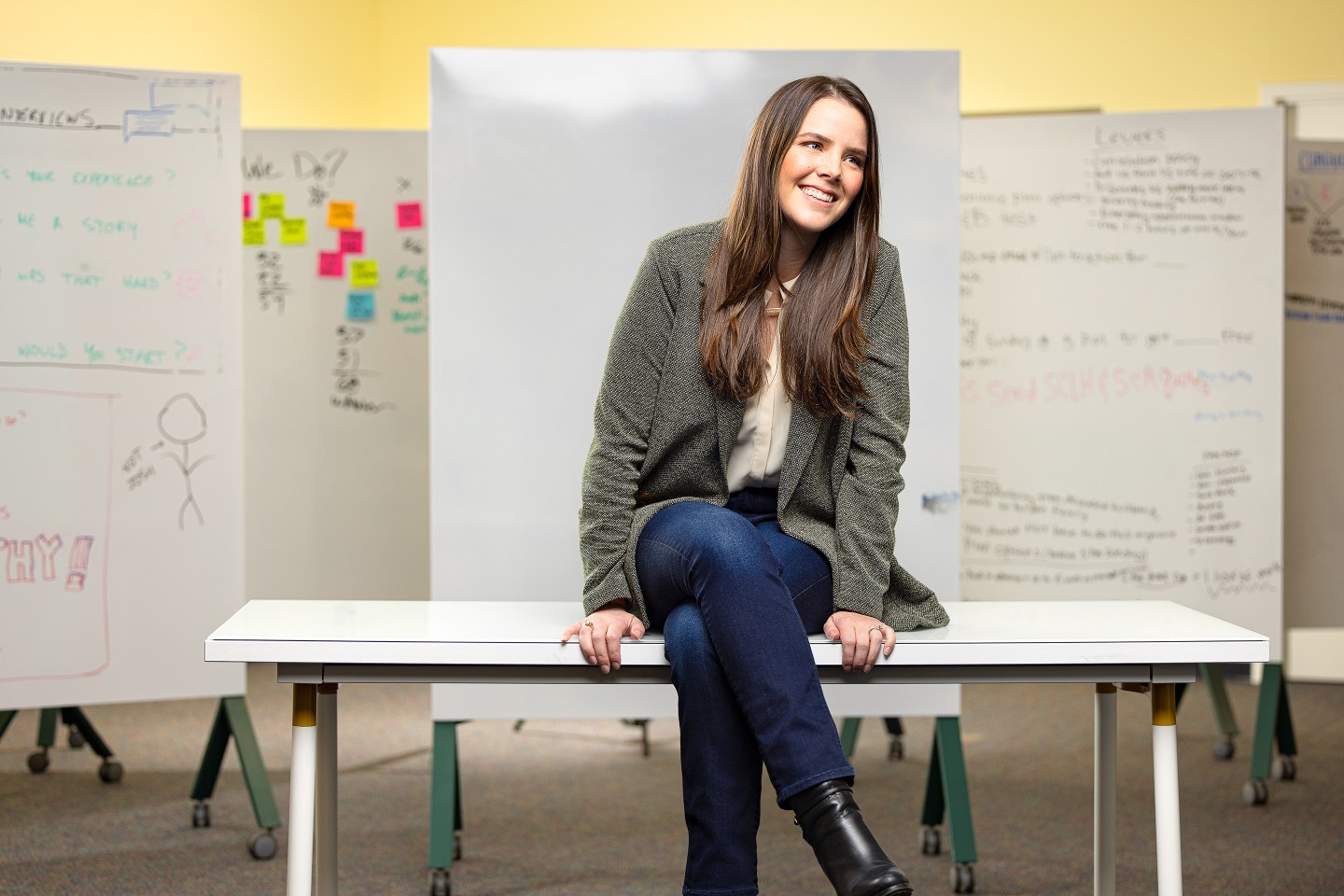 Jessie Becker Alexander, photographed in Sacramento, California on Dec. 20, 2022. When she was 21, she co-founded and became CEO of the startup that developed the Jada device.
Photograph by Kevin Fiscus for Fortune

Good morning, Broadsheet readers! Today’s guest essay comes from Fortune senior writer Maria Aspan, who dives into her recent work about how medicine has left women behind. Plus: California Public Employees’ Retirement System’s money could soon go toward women-managed funds and Rep. Katie Porter makes a bid for the Senate. Have a great Wednesday.

-Missing medicine. A couple of years ago, my colleague Erika Fry and I started having conversations about a theme that keeps cropping up in our reporting: Why is women’s health so underresearched, underfunded, and underserved?

Women account for more than half of the population and 80% of all health care purchasing decisions. They take more prescription drugs than men do and more often go to the doctor. But despite their market power, for much of history, women have largely been treated like an afterthought or inconvenience—at best—for the $4.3 trillion American health care market. Only 5% of all biopharma R&D spending goes towards female-specific conditions, most of which are cancer-related. (Take out oncology and it drops to 1%.) And for all the buzz about femtech, the numbers aren’t better in the startup ecosystem: In 2021, women’s health accounted for only 5% of all digital health investment in the United States.

At worst, this lack of attention creates deadly consequences for women: Witness America’s horrific maternal mortality rate, the worst of any developed nation, and its heightened toll among Black and Indigenous women. (It’s likely to get even worse in the wake of the Supreme Court decision overturning Roe v. Wade in June: Abortion bans increase maternal death rates, several studies have found.) Or there’s what happens when companies, doctors, and regulators ignore decades of patient complaints, as I covered in this award-winning investigation into the risky—and sometimes fatal—business of breast implants. And over the past couple of years, as Erika and I kept talking about this, even reporting focused on other business topics kept bringing us back to women’s health, and the stunning lack of basic services for very common problems. A case in point: my profile of Instacart CEO Fidji Simo, who’s one of the 10% of U.S. women suffering from endometriosis, and whose experience navigating the health care system eventually led her to start her own clinic specifically focused on women’s health.

A year ago, Erika and I were awarded a grant from the NIHCM Foundation, for a “series of stories that will examine how and why the business of science and medicine left women behind.” We’ve spent the past few months reporting on related projects and, in late December, Fortune published the first feature to come out of that grant: Erika’s beautifully written, exhaustively reported story of a simple medical device, called the Jada System, that could help save 70,000 women from dying of post-pregnancy complications every year.

Jessie Becker Alexander, photographed in Sacramento, California on Dec. 20, 2022. When she was 21, she co-founded and became CEO of the startup that developed the Jada device.
Photograph by Kevin Fiscus for Fortune

The Jada saga is a global health story about an invention that could save thousands of lives in countries where few can afford it. It’s a traditional startup story, about a group of young founders who built an “elegant” and “basic” solution to a longstanding, life-threatening problem. (Jessie Becker Alexander, the first CEO of the company that developed the Jada, first teamed up with its inventors when they were undergrads at Cal Poly San Luis Obispo.) And it’s a story about how large pharmaceutical companies—and their investors—value women’s health care.

“It’s believed you can’t make money in women’s health,” says Dr. Elizabeth Garner, chief scientific officer for Ferring, a privately held, 72-year-old Swiss company that’s a leader in the field. Garner and others describe that self-reinforcing notion as a brick wall that entrepreneurs and innovators consistently crash into. Valuations of women’s health companies are depressed because there are few success stories to point to, and there are few success stories because they struggle to get sufficient investor support. And with male investors and executives still far more likely than female ones to be calling the shots, women’s health has been that much more likely to wind up in the industry’s discard pile.

I hope you’ll read Erika’s entire story here, down to its devastating kicker about how many lives the Jada device could save in Uganda—if only the doctors and hospitals there could afford it.

Meanwhile, keep an eye out for future reporting in this series. I’m currently working on a feature about over-the-counter access to birth control—if you have a tip to share about that (or a solution to the access problem), or other ideas about how we should be investigating medicine’s gender gap, please email me at maria.aspan@fortune.com.

- California in Congress. Rep. Katie Porter (D) made her run for Senate official yesterday. The California congresswoman will make a bid for the Senate seat currently occupied by Sen. Dianne Feinstein, who is expected to retire ahead of the 2024 election. CNN

- More to watch. Behind Netflix's quest for domination is Bela Bajaria, the streamer's head of global TV. She says the company's aggressive approach to television production is because "people like having more." The New Yorker

- Calpers makes a bet. The California Public Employees’ Retirement System, or Calpers, is making a big bet on small private equity firms that could put its money behind women- and minority-managed companies and funds. Calpers is putting $500 million into TPG's Next Fund and the same amount into GCM Grosvenor. Bloomberg

- State of the state. New York Gov. Kathy Hochul delivered her state of the state speech yesterday. The governor, who was recently elected to her first full term, outlined a plan to create more affordable housing and public safety proposals, which includes hiring more prosecutors to address a case backlog. New York Times

- Dress code. As people become more comfortable bringing their full, authentic selves to work, a new category of workwear is emerging for nonbinary people. People who dress outside typical gender norms say they are figuring out what kind of work clothes make them feel most comfortable at the office or on Zoom. New York Times

- Healthy leave. Paid parental leave contributes to better mental health, according to a new study. The research examining data from 45 earlier studies concluded that incidences of depression, psychological distress, and burnout all declined at organizations with paid leave. Fatherly

- Bankruptcy prep. As Bed Bath & Beyond prepares for a likely bankruptcy, the company is cutting costs. The company led by CEO Sue Gove is shutting about 150 stores and conducting layoffs. Wall Street Journal

Workplace friendships are worth the occasional awkwardness Bloomberg

"You just read these women’s voices the entire time. It was really remarkable."

- Actor Claire Foy on reading the script for Women Talking, a film about sexual assault in a Mennonite community.