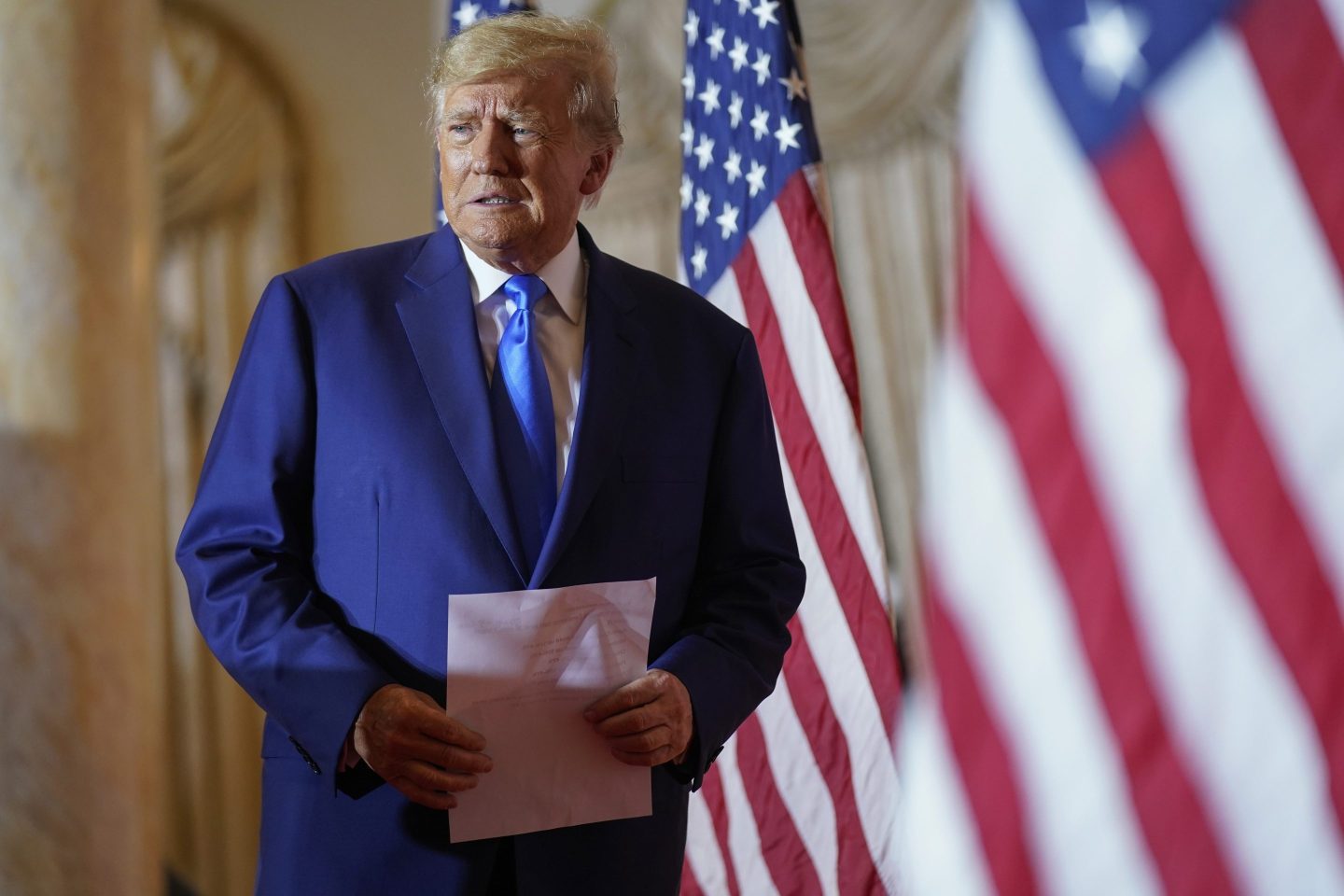 Democrats in Congress released thousands of pages of former President Donald Trump’s tax returns Friday, providing the most detailed picture to date of his finances over a six-year period, including his time in the White House, when he fought to keep the information private in a break with decades of precedent.

The documents include individual returns from Trump and his wife, Melania, along with Trump’s business entities from 2015-2020. They show how Trump used the tax code to lower his tax obligation and reveal details about foreign accounts, charitable contributions and the performance of some of his highest-profile business ventures, which had largely remained shielded from public scrutiny.

The disclosure marks the culmination of a yearslong legal fight that has played out everywhere from the presidential campaign to Congress and the Supreme Court as Trump persistently rejected efforts to share details about his financial history — counter to the practice of transparency followed by all his predecessors in the post-Watergate era. The records release comes just days before Republicans retake control of the House and weeks after Trump announced another campaign for the White House.

The records show how Trump limited his tax liability by offsetting his income against corporate losses as well as millions of dollars in business expenses, asset depreciation and other deductions.

Trump, according to the filings, reported having bank accounts in China, Ireland and the United Kingdom in 2015 through 2017, even as he was commander in chief. Starting in 2018, however, he only reported an account in the U.K. The returns also show that Trump claimed foreign tax credits for taxes he paid on various business ventures around the world, including licensing arrangements for use of his name on development projects and his golf courses in Scotland and Ireland.

In several years, Trump appears to have paid more in foreign taxes than he did in net U.S. federal income taxes, with income reported in countries including Azerbaijan, China, India, Indonesia, Panama, the Philippines, St. Martin, Turkey and the United Arab Emirates.

It’s unclear whether the reported sums included Trump’s $400,000 annual presidential salary, which he had said, as a candidate, that he would forgo and which he claimed he donated to various federal departments.

Jeff Hoopes, an accounting professor at the University of North Carolina’s Kenan-Flagler Business School, described Trump’s returns as “large and complicated” with “hundreds of entities scattered all over the globe.”

He noted that many of those entities are slightly unprofitable, which he described as “pretty magical as far as the tax code.”

“It’s hard to know if someone’s really bad at business or really good at tax planning, because they both look like the same thing,” he said.

Daniel Shaviro, a taxation professor at New York University, cited the large financial losses from so many of Trump’s businesses, despite their often healthy sales, as something that should raise suspicions from auditors. “There’s fishy looking stuff here.”

Shaviro also cited examples of suspicious or sloppy math even in smaller businesses, such as an aviation firm dubbed “DT Endeavor I LLC,” which in 2020 reported both sales and expenses of $160,144. Such exact matches are unusual, Shaviro said. Yet the form also reported an $18,923 loss.

“The return doesn’t say, ‘Guess what? I’m committing fraud,’” Shaviro said, “but there are red flags.”

The release marks the latest setback for Trump, who has been mired in investigations, including federal and state inquiries into his efforts to overturn the 2020 election. The Department of Justice also has been investigating reams of classified documents found at his Mar-a-Lago club and possible efforts to obstruct the investigation.

In a statement Friday, Trump lashed out at Democrats and the Supreme Court for the release.

“It’s going to lead to horrible things for so many people,” he said. “The radical, left Democrats have weaponized everything, but remember, that is a dangerous two-way street!”

He said the returns demonstrated “how proudly successful I have been and how I have been able to use depreciation and various other tax deductions” to build his businesses.

The returns were released by the House Ways and Means Committee, which held a party-line vote last week to make the returns public after years of legal wrangling.

The returns detail how Trump used tax law to minimize his liability, including carrying forward massive losses from previous years. Trump said during his 2016 campaign that paying little or no income tax in some years “makes me smart.”

In 2020, more than 150 of Trump’s business entities listed negative qualified business income, which the IRS defines as “the net amount of qualified items of income, gain, deduction and loss from any qualified trade or business.” In total for that tax year, combined with nearly $9 million in carryforward loss from previous years, Trump’s qualified losses amounted to more than $58 million.

Another of Trump’s money losers: the ice rink his company operated until last year in New York City’s Central Park. Trump reported a total of $2.6 million in losses from Wollman Rink over the six years made public. The rink, an early Trump Organization jewel run through a contract with New York City’s government, reported a loss of $1.3 million in 2015 despite taking in $9.3 million in revenue, according to the tax returns. The rink turned a $298,000 profit in 2016, but was back to melting cash in each of the next four years.

“Trump seems to be creating huge losses that are suspicious or questionable under current law,” said Steven Rosenthal, a senior fellow at the Urban-Brookings Tax Policy Center, who said he had spent 20 years preparing taxes for corporations and wealthy individuals and “never saw anyone lose money as regularly and as large as Trump lost money year after year.”

Aspects of Trump’s finances had been shrouded in mystery since his days as an up-and-coming Manhattan real estate developer in the 1980s.

Trump, known for building skyscrapers and hosting a reality TV show before winning the White House, did offer limited details about his holdings and income on mandatory disclosure forms and financial statements he provided to banks to secure loans and to financial magazines to justify his ranking on lists of billionaires.

Trump’s longtime accounting firm has since disavowed the statements, and New York’s attorney general has filed a lawsuit alleging Trump and his Trump Organization fraudulently inflated asset values on the statements. Trump and his company have denied wrongdoing.

In October 2018, The New York Times published a Pulitzer Prize-winning series based on leaked tax records that contradicted the image Trump had tried to sell of himself as a self-made businessman. It showed that Trump received a modern-day equivalent of at least $413 million from his father’s real estate holdings, with much of that money coming from what the Times called “tax dodges” in the 1990s.

A second series in 2020 showed that Trump paid no income taxes at all in 10 of the previous 15 years because he generally lost more money than he made.

In its report last week, the Ways and Means Committee indicated the Trump administration may have disregarded a requirement mandating audits of a president’s tax filings.

The IRS only began to audit Trump’s 2016 tax filings on April 3, 2019 — more than two years into his presidency — when the Ways and Means chairman, Rep. Richard Neal, D-Mass., asked the agency for information related to the returns.

Every president and major-party candidate since Richard Nixon has voluntarily made at least summaries of their tax information available to the public.