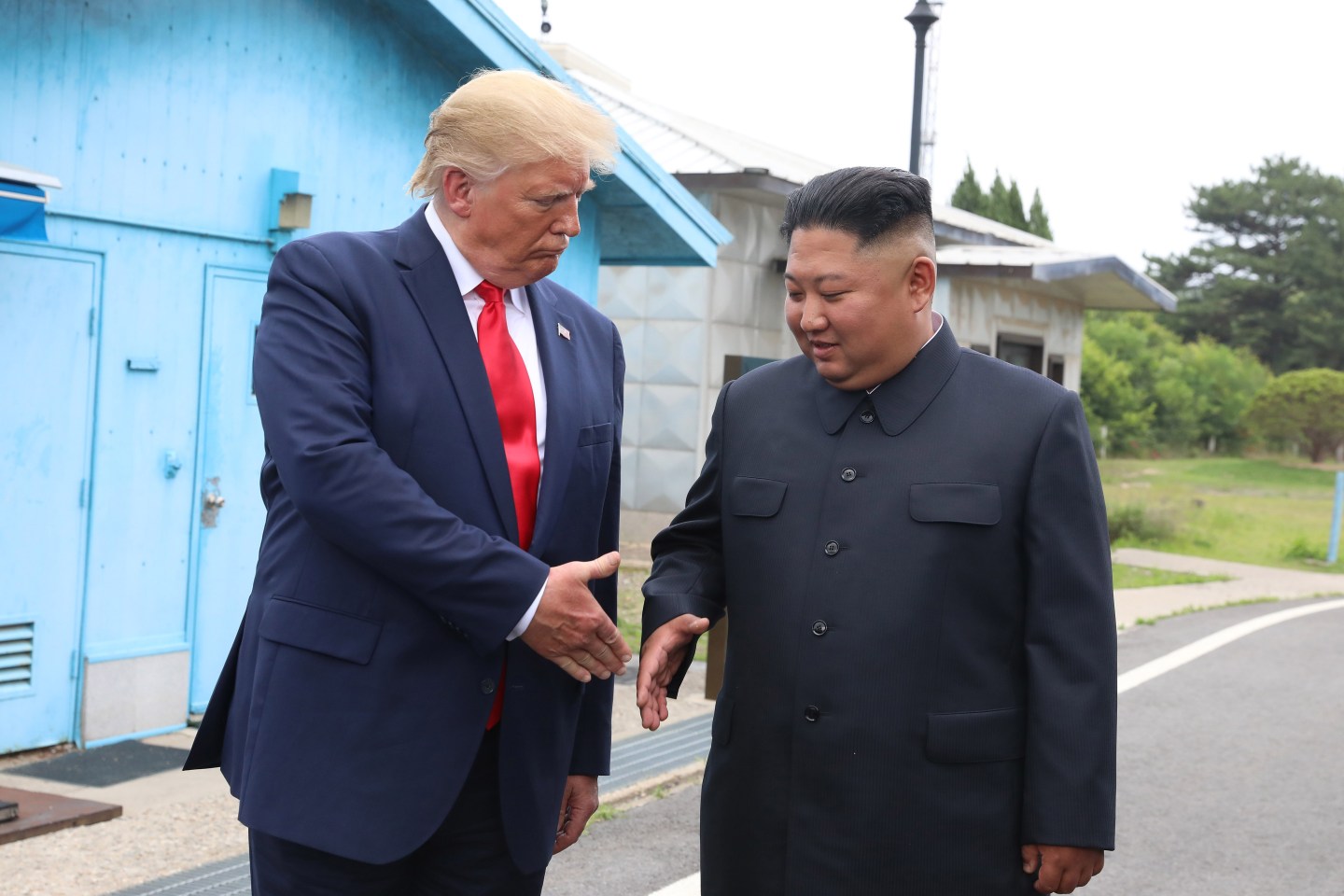 North Korean leader Kim Jong Un pledged to increase his nuclear arsenal in the new year to stifle US and South Korean hostile acts, in a policy-setting address where he left almost no opening for a return to long-stalled disarmament talks.

In a speech that came at the end of a nearly weeklong meeting of his ruling Workers Party, Kim said Washington and Seoul are taking aim at his government, which raises his need to produce even more nuclear weapons, the official Korean Central News Agency reported Sunday.

“Now that the south Korean puppet forces who designated the DPRK as their ‘principal army’ and openly trumpet about ‘preparations for war’ have assumed our undoubted enemy, it highlights the importance and necessity of a mass-producing of tactical nuclear weapons and calls for an exponential increase of the country’s nuclear arsenal,” KCNA cited Kim as saying in a report. His state’s official name is the Democratic People’s Republic of Korea and it uses lower case in its media in referring to its neighbor.

Kim’s report to wrap up the plenary meeting of the Central Committee of his ruling Workers’ Party appeared to take the place of his traditional New Year’s Day address. He also pledged that his state would launch its first military satellite and develop a new type of intercontinental ballistic missile, which could be used to deliver a warhead to the US mainland.

“The prevailing situation calls for making redoubled efforts to overwhelmingly beef up the military muscle to thoroughly guarantee the sovereignty, security and fundamental interests of the Republic in response to the worrying military moves by the US and other hostile forces precisely targeting the DPRK,” KCNA cited Kim as saying in the report.

With little threat of new sanctions and plans already afoot to further develop weapons including drones, submarines and missiles, Kim has been looking to continue honing his ability to deliver a credible nuclear strike against the US and its allies, such as South Korea and Japan.

The North Korea leader has raised tension to levels not seen in years by firing off more than 70 ballistic missiles in 2022, lowering his guardrails for the use of nuclear weapons and saying he sees no need to going back to the bargaining table for talks on winding back his nuclear arsenal in return for relief from sanctions choking his state’s paltry economy.

His state fired three short-range ballistic missiles on the last day of the year and then fired off one more a few hours after the new year started in a defiant show of force that could set the tone for a further ratcheting up of tensions.

North Korea will keep advancing its nuclear and missile threat and South Korean armed forces should retaliate sternly against any provocation, President Yoon Suk Yeol said in a call with the chief of general staff, according to his office in Seoul.

Any attempt by Kim to use nuclear arms will lead to the end of his regime, South Korea’s Defense Ministry warned in a separate statement, commenting on the party meeting.

Kim in 2022 faced one of the most difficult years of his decade in power on the domestic front, admitting to a Covid outbreak in a country that has refused international vaccine assistance. Severe weather exacerbated a chronic food shortage and his decision to close borders at the start of the pandemic slammed the breaks on the little legal trade his state had — triggering the economy’s worst slump in decades.

Kim also appears ready to conduct his first nuclear test since 2017 as he seeks to miniaturize warheads for tactical weapons to strike South Korea and Japan, which host the bulk of US troops in Asia. An atomic detonation could also help increase the strength of a warhead he could attach to an intercontinental ballistic missile capable of hitting the American mainland.

The US, South Korea and Japan have pledged a stern, coordinated punishment if Kim tests a nuclear weapon. But years of sanctions and isolation have failed to get Kim to change course. Now there’s almost no chance Russia or China, which have veto power at the United Nations Security Council, would support any new measures against North Korea as they did back in 2017 during a flurry of tests that raised global concern.

Kim has ignored US attempts to return to nuclear disarmament talks and brought along his daughter for her state media debut to attend the November launch of an ICBM — signaling there’s another generation ready to take over the Cold War’s last continuous family dynasty and it will depend on nuclear weapons for its survival.

Kim has also shown signs of loosening border restrictions to allow more trade with long-time partners China and Russia, which could weaken the global sanctions regime. The US has accused North Korea of selling weapons to Russia in defiance of UN sanctions to aid Vladimir Putin in his war against Ukraine. Pyongyang has dismissed the allegation as a baseless rumor, but it has also reestablished its sole train link with Russia that was halted almost three years ago due to Covid-19.

North Korea may put on a display of its might in the coming weeks. Specialist service NK News said satellite imagery in December showed thousands of North Korean soldiers have started training for a military parade.

In his speech a year ago, Kim urged North Korea to focus on easing food shortages and containing Covid, in a downbeat New Year’s policy assessment that suggested nuclear talks with the US were a low priority.

–With assistance from Sam Kim and Sangmi Cha.