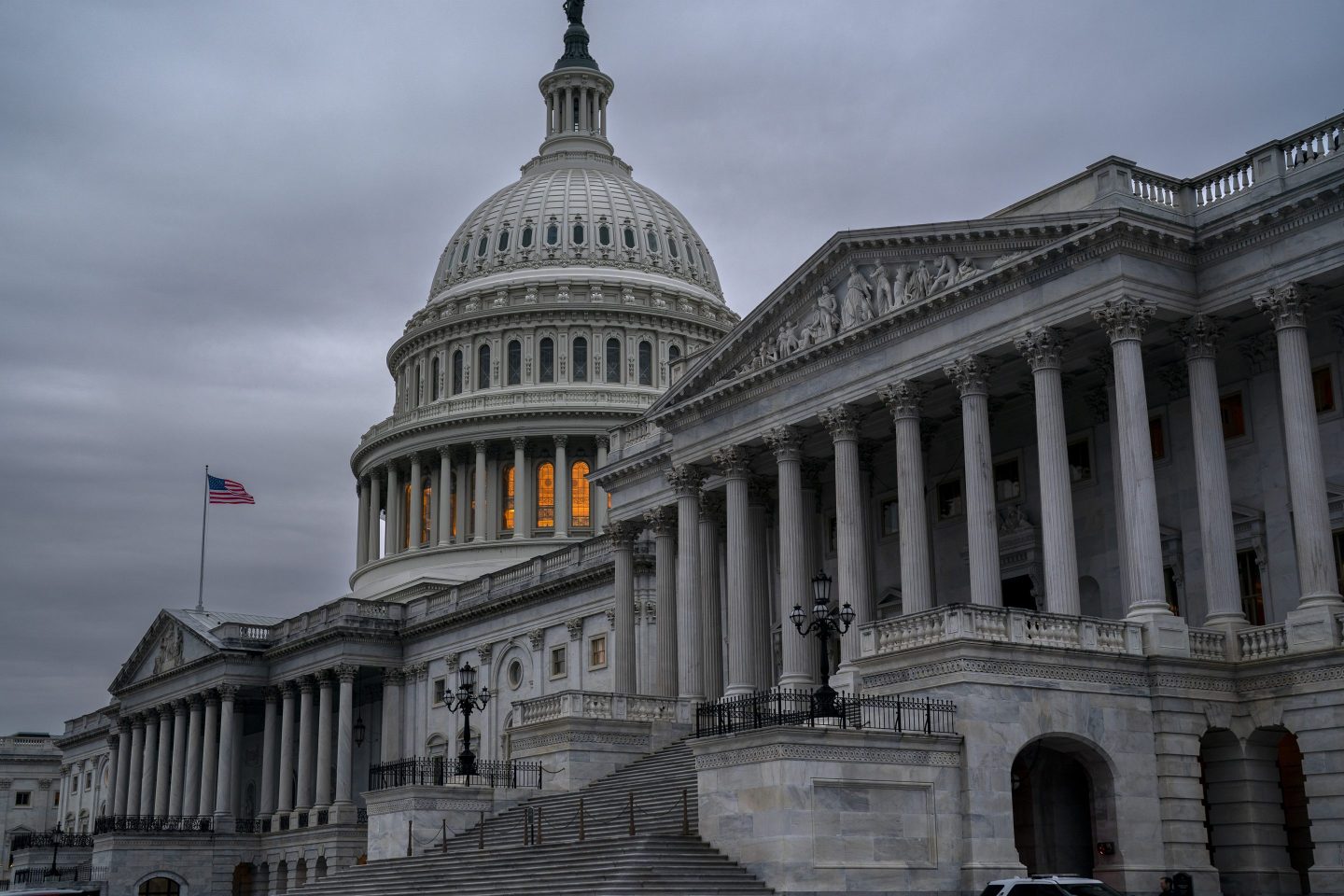 A $1.7 trillion spending bill financing federal agencies through September and providing more aid to a devastated Ukraine cleared the House on Friday as lawmakers race to finish their work for the year and avoid a partial government shutdown.

The bill passed mostly along party lines, 225-201. It now goes to President Joe Biden to be signed into law.

Passage of the bill represented a closing act for Rep. Nancy Pelosi’s second stint as House speaker, and for the Democratic majority she led back to power in the 2018 election. Republicans will take control of the House next year and Rep. Kevin McCarthy is campaigning to replace her.

He is appealing for support from staunch conservatives in his caucus who have largely trashed the size of the bill and many of the priorities it contains. He spoke with a raised voice for about 25 minutes, assailing the bill for spending too much and doing too little to curb illegal immigration and the flow of fentanyl across the U.S.-Mexico border.

“This is a monstrosity that is one of the most shameful acts I’ve ever seen in this body,” McCarthy said of the legislation.

The speech prompted a quick quip from Rep. Jim McGovern, D-Mass., who said “after listening to that, it’s clear he doesn’t have the votes yet,” a reference to McCarthy’s campaign to become speaker.

Pelosi said “we have a big bill here because we had big needs for the country,” then turned her focus to McCarthy:

“It was sad to hear the minority leader say that this legislation is the most shameful thing to be seen on the House floor in this Congress,” Pelosi said. “I can’t help but wonder, had he forgotten January 6th?”

The Senate passed the defense-heavy measure with significant bipartisan support on Thursday, but the vote was much more split in the House. Some 30 GOP lawmakers promised to block any legislative priority that comes from those Republican senators who voted for the bill and leadership urged a no vote.

The bill runs for 4,155 pages, not including amendments the Senate added. It contains about a 6% percent increase in spending for domestic initiatives, to $772.5 billion. Spending on defense programs will increase by about 10% to $858 billion.

The bill’s passage came only hours before financing for federal agencies expires. Lawmakers have passed two stopgap spending measures to keep the government operating so far for this budget year and a third was set to pass Friday as well to ensure services continue until Biden could sign the full-year measure, called an omnibus, into law.

The massive bill wraps together 12 appropriations bills, aid to Ukraine and disaster relief for communities recovering from hurricanes, flooding and wildfires. It also contains scores of policy changes that lawmakers worked to include in the final major bill being considered by the current Congress.

Lawmakers provided roughly $45 billion for Ukraine and NATO allies, more than even Biden requested, an acknowledgment that future rounds of funding are not guaranteed with a new GOP-led House.

In a dramatic address to a joint meeting of Congress on Wednesday night, Ukrainian President Volodymyr Zelenskyy told lawmakers that the aid was not charity, but an investment in global security and democracy.

Though Ukraine aid has largely had bipartisan support, some House Republicans have been critical of the effort, arguing the money is better spent on priorities in the U.S.

“How can we send an additional $47 BILLION to Ukraine for security while terrorists, drugs, and criminals flood our southern border?” tweeted Rep. Matt Rosendale, R-Mont.

“$100 billion to Ukraine. Let’s put that in perspective,” tweeted Rep. Thomas Massie, R-Ky., who included past rounds of aid in his count. “That’s more than $200 million this year from each Congressional district. What could your congressman have done for your district with $200 million?”

McCarthy has warned that Republicans would not write a “blank check” for Ukraine in the next Congress. Senate Majority Leader Chuck Schumer said after Thursday’s vote he’s having trouble understanding the concerns.

“I’m just befuddled by some of these right-wing Republicans who don’t want to help Ukraine,” Schumer said. “It’s always been, the more hard right you were, the more anti-Soviet you were, but all of a sudden, they’re pro. I hope it’s not a residue of Trump.”

The Senate passed the funding package Thursday by a vote of 68-29 but it takes time for the Senate clerk’s office to review the bill and include amendments that were added that day. As a result, the bill ended up passing with a half-empty House chamber. More than 220 lawmakers sought the option to vote by proxy, and many raced to get out of town before risking canceled flights and spending Christmas in Washington.

Republicans have vowed that abolishing the practice of remote voting will be among their first acts in the majority next year.

The funding bill also contains roughly $40 billion in emergency spending in the U.S., mostly to assist communities across the country recovering from drought, hurricanes and other natural disasters.

And it has scores of policy changes largely unrelated to spending that lawmakers worked furiously behind the scenes to include, else they start from scratch next year in a divided Congress where Republicans will be returning to the majority in the House.

One of the most notable examples was a historic revision to federal election law that aims to prevent any future presidents or presidential candidates from trying to overturn an election.

The bipartisan overhaul of the Electoral Count Act is in direct response to former President Donald Trump’s efforts to persuade Republican lawmakers and then-Vice President Mike Pence to object to the certification of Biden’s victory on Jan. 6, 2021.

Among the spending increases Democrats emphasized: a $500 increase in the maximum size of Pell grants for low-income college students, a $100 million increase in block grants to states for substance abuse prevention and treatment programs, a 22% increase in spending on VA medical care and $3.7 billion to provide emergency relief to farmers and ranchers hit by natural disasters, just to name a few.

The bill also provides roughly $15.3 billion for more than 7,200 projects that lawmakers sought for their home states and districts. Under revamped rules for community project funding, also referred to as earmarks, lawmakers must post their requests online and attest they have no financial interest in the projects. Still, many fiscal conservatives criticize the earmarking as leading to unnecessary spending.