The U.S. is suing Arizona’s governor because his shipping container border wall with Mexico is ‘trespassing’ on federal land 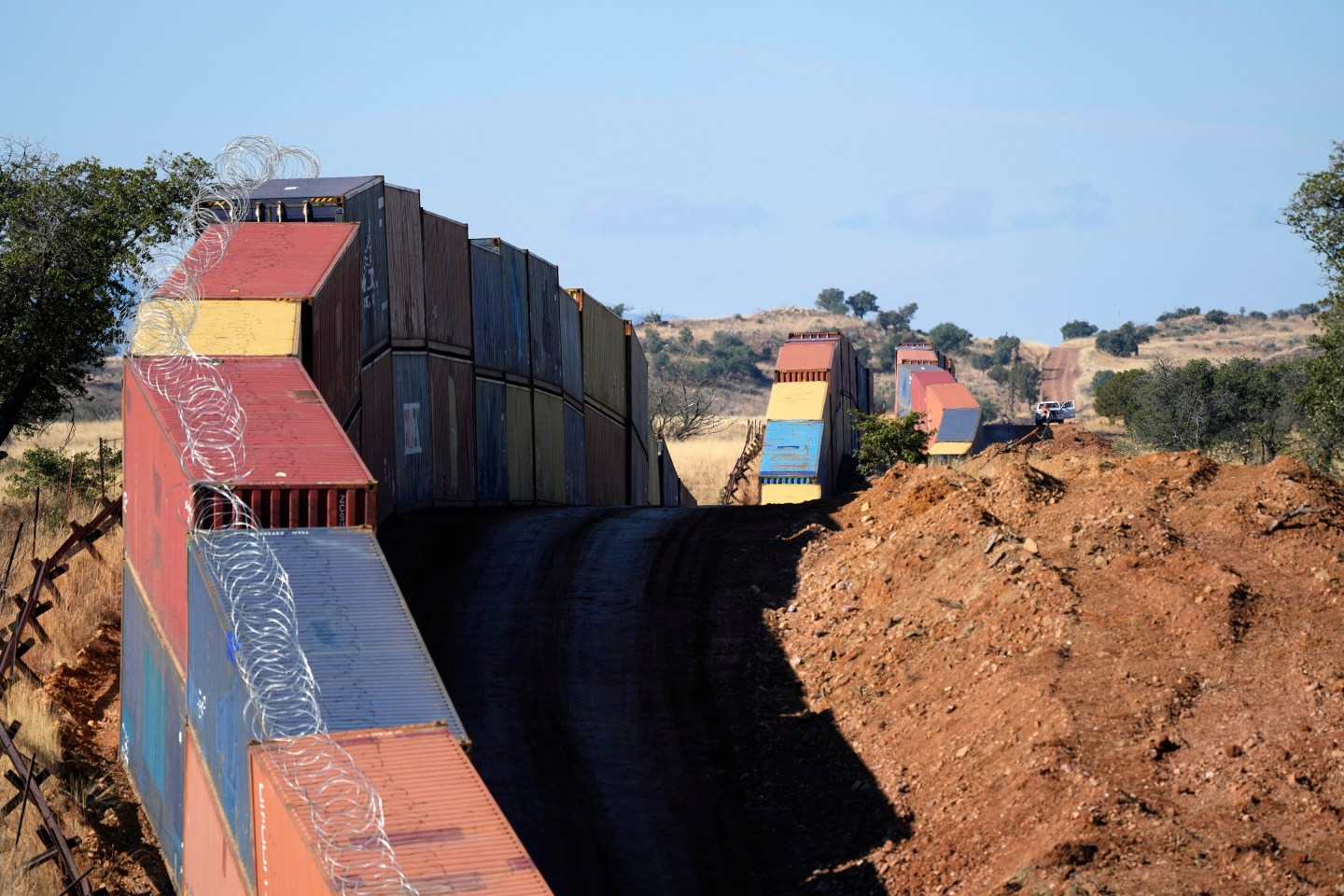 The U.S. government sued Arizona Gov. Doug Ducey and the state Wednesday over the placement of shipping containers as a barrier on the border with Mexico, saying it is trespassing on federal lands.

The complaint filed in U.S. District Court comes three weeks before the Republican governor steps aside for Democratic Gov.-elect Katie Hobbs, who has said she opposes the construction.

Ducey told U.S. officials earlier this week that Arizona is ready to help remove the containers, which he says were placed as a temporary barrier. But he wants the U.S. government to say when it will fill any remaining gaps in the permanent border wall as it announced it would a year ago.

The U.S. “owes it to Arizonans and all Americans to release a timeline,” he wrote in a Tuesday letter, responding to news of the pending federal complaint.

Border security was a focus of Donald Trump’s presidency and remains a key issue for Republican politicians.

The Department of Justice complaint asks the court for Arizona to be ordered to halt placement and remove the containers in remote San Rafael Valley in southeastern Cochise County.

The work placing up to 3,000 containers at a cost of $95 million is about a third complete, but protesters concerned about its impact on the environment have held up work in recent days.

“Officials from Reclamation and the Forest Service have notified Arizona that it is trespassing on federal lands,” the complaint reads. The action also seeks damages to compensate the United States to fix any damage along the border.

The Justice Department sued on behalf of the Bureau of Reclamation, the Department of Agriculture and the Forest Service it oversees.

U.S. Agriculture Secretary Tom Vilsack said in a statement from Washington that the project “is not an effective barrier, it poses safety hazards to both the public and those working in the area and has significantly damaged public land.”

“We need serious solutions at our border, with input from local leaders and communities. Stacking shipping containers is not a productive solution,” Vilsack said.

The complaint was applauded by U.S. Rep. Raúl M. Grijalva, a Democrat who represents southern Arizona. He called the project an “illegal junkyard border wall.”

Russ McSpadden, Southwest conservation advocate for the Center for Biological Diversity, said the federal complaint “should be the beginning of the end of Doug Ducey’s lawless assault on protected national forestlands and endangered wildlife.”

Ducey wrote federal officials after being informed of their intent to file the complaint and rejected their argument that the containers “present serious public safety risks and environmental harms.”

“The number one public safety risk and environmental harm has come from inaction by the federal government to secure our border,” Ducey wrote, with the January 2021 halt in the building of Trump’s border wall resulting in “an ever-increasing number of migrants who continue to flow into the state.”

Ducey’s move comes amid a record flow of migrants arriving at the border. U.S. border officials have stopped migrants 2.38 million times in the fiscal year that ended Sept. 30, up 37% from the year before. The annual total surpassed 2 million for the first time in August and is more than twice the highest level during Trump’s presidency, in 2019.

Ducey also rejected the U.S. government’s claims that the containers interfere with the ability of federal agencies to carry out their official duties, as well as to complete construction of border infrastructure in some areas.

He said he was encouraged by the Biden administration’s earlier announcement it would fill gaps in the wall, but that was a year ago.

“Arizona had no other choice but to address the crisis at its southern border and began erecting a temporary border barrier,” the governor wrote.

Hobbs has said she considers the project a political stunt, but hasn’t decided what to do about the containers after her Jan. 5. inauguration.

Ducey sued federal officials over their objections to the container wall Oct. 21, insisting that Arizona holds sole or shared jurisdiction over the 60-foot (18.2 meter) strip the containers rest on and has a constitutional right to protect residents from “imminent danger of criminal and humanitarian crises.”

Ducey’s container wall effort began in late summer in Yuma in western Arizona, a popular crossing point, with scores of asylum-seekers arriving daily and often finding ways to circumvent the new barriers. The containers filled areas left open when Trump’s 450-mile (724 km) border wall was built. But remote San Rafael Valley — the latest construction site — is not typically used by migrants and was not contemplated in Trump’s wall construction plan.