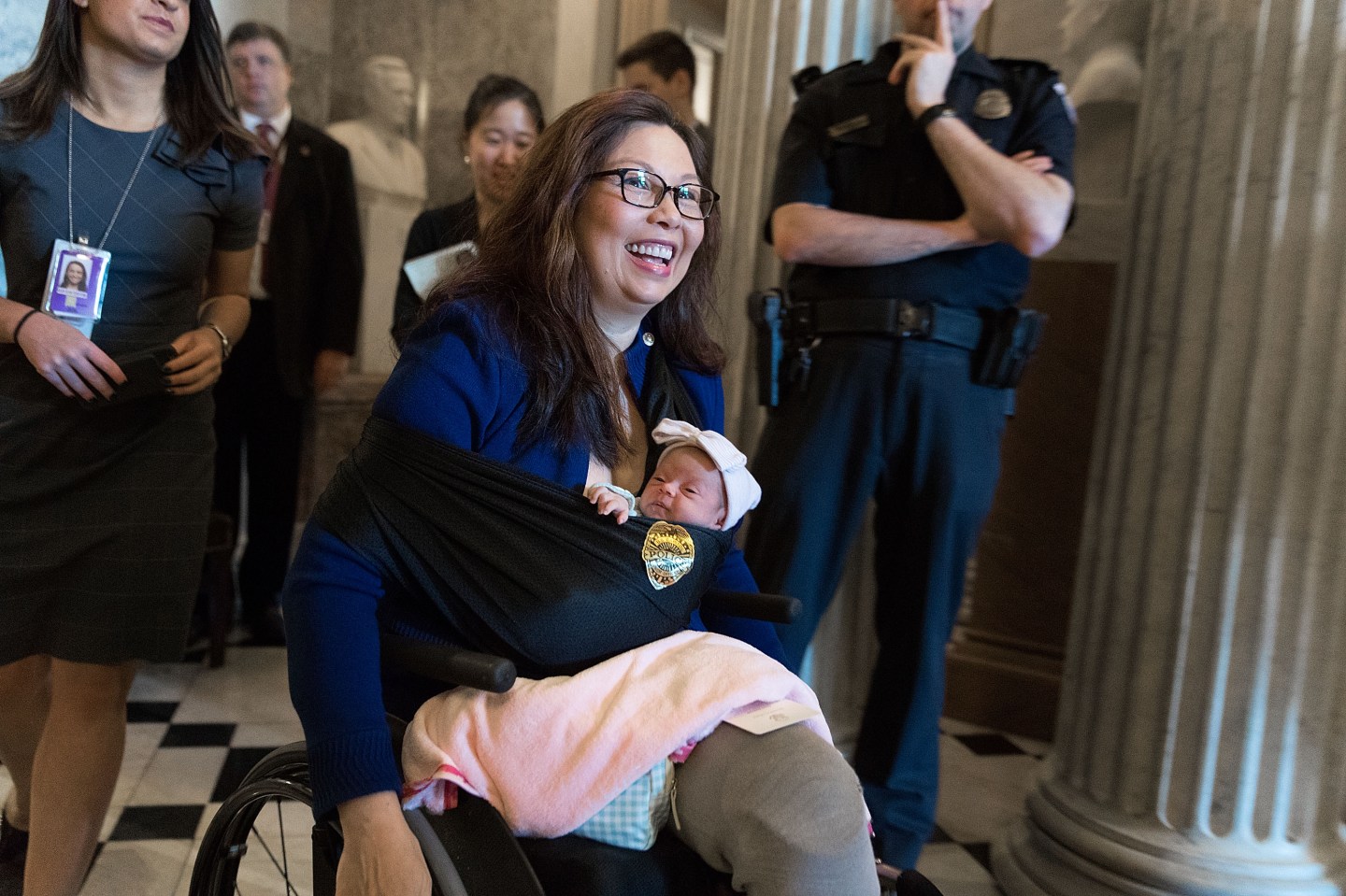 Sen. Tammy Duckwoth with her daughter in 2018.
Chip Somodevilla/Getty Images

Good morning, Broadsheet readers! Iran is removed from the UN Commission on the Status of Women, the National Women’s Soccer League was allegedly rife with abuse, and Sen. Tammy Duckworth (D-Ill.) takes steps to protect access to IVF. Have a lovely Thursday.

– Protecting parenthood. Sen. Tammy Duckworth’s journey to parenthood took a decade. After she returned wounded from her service in Iraq, she spoke to her OB/GYN at her Veterans Affairs hospital about trying to have a child. She was referred to a fertility specialist, who came to the waiting room rather than meet with then-39-year-old Duckworth for an appointment. “She told me, ‘You’re too old. There’s no way you could ever get pregnant through reproductive medicine. You just need to go home and enjoy your husband,'” Duckworth remembers.

“I believed her,” she says now. It wasn’t until five years later that Duckworth spoke to another doctor who told her about possible treatments—and found out her original specialist was part of a Catholic hospital. “I wasted five years because I was not given full information by a doctor at an institution that didn’t support IVF because of religious grounds,” the senator says.

So when this summer’s reversal of Roe v. Wade signaled that access to assisted reproductive technology was under threat, Duckworth knew what was at stake. This morning, Duckworth, Sen. Patty Murray (D-Wash.), and Rep. Susan Wild (D-Pa.) are planning to introduce the Right to Build Families Act. The bill would prohibit state laws that prevent individuals from accessing IVF and other reproductive technologies, protect the health care providers who give such services, and allow the Justice Department to pursue action against states that violate those rules.

Sen. Tammy Duckwoth with her daughter in 2018.
Chip Somodevilla/Getty Images

“I want to make sure that Americans have the right to start or grow their families,” Duckworth says.

Banning some forms of reproductive technology is a goal of the far-right anti-abortion movement that’s seeking to pass “personhood” amendments and laws that grant rights to a fetus or to embryos.

The laws are controversial enough that even former Vice President Mike Pence, a strong opponent of abortion, spoke out in support of protecting access to IVF. Duckworth hopes GOP lawmakers in Congress will also sign on to support the bill. “I think Republicans feel somewhat vulnerable when it comes to this,” she says.

Duckworth’s own story had a happy ending. She welcomed her two daughters via IVF. The second was born in 2018 when Duckworth was 50, making her the first sitting senator to give birth. She and her husband have a remaining frozen embryo that they are deciding what to do with. “Whether we’re going to use a surrogate or donate it for scientific research,” she says, “we should be the ones making that decision.”

- UN decision. The UN Economic and Social Council agreed to remove Iran from the UN's Commission on the Status of Women. The U.S. brought forward a resolution moving for Iran's ouster after the start of widespread women's rights protests in Iran. Reuters

- Who's in charge? U.S. authorities are arguing that disgraced FTX founder Sam Bankman-Fried was the one running Alameda Research, despite the presence of Alameda's own CEO Caroline Ellison. Alameda is at the center of fraud allegations against Bankman-Fried and FTX, and Bankman-Fried has so far seemed to blame Ellison for the misuse of customer funds at the firm. Wall Street Journal

- Inside the NWSL. A new report found that "financial instability and unbalanced power dynamics" created the opportunity for "rampant abuse" in the National Women's Soccer League. Players have experienced misconduct at the vast majority of NWSL clubs, the report said. Washington Post

- Emotional testimony. Megan Thee Stallion testified on Tuesday in the assault trial of Tory Lanez, who's accused of shooting Megan in the foot. Megan said the 2020 shooting and the doubt and backlash she faced after sharing her experience have hurt her physical and mental health. "I wish he would have just shot and killed me if I knew I would have to go through this torture," she said in the emotional testimony. Lanez has pled not guilty. NPR

- Final act. Oregon Gov. Kate Brown said she plans to commute the sentences of 17 people on death row to life in prison without parole. The decision is one of Brown's last acts as governor. She spoke out against capital punishment in her announcement. NBC News

- Saving a spot. Brittney Griner's choice about returning to professional basketball is unlike anything the WNBA has navigated before. Although Griner is technically a free agent (her contract was up in 2022), the Phoenix Mercury is holding a spot for her. Wall Street Journal

"There is the inclination to always think a woman is just being dramatic."

—Amy Schumer on her long journey to receiving an endometriosis diagnosis. She discusses the condition in a new documentary.