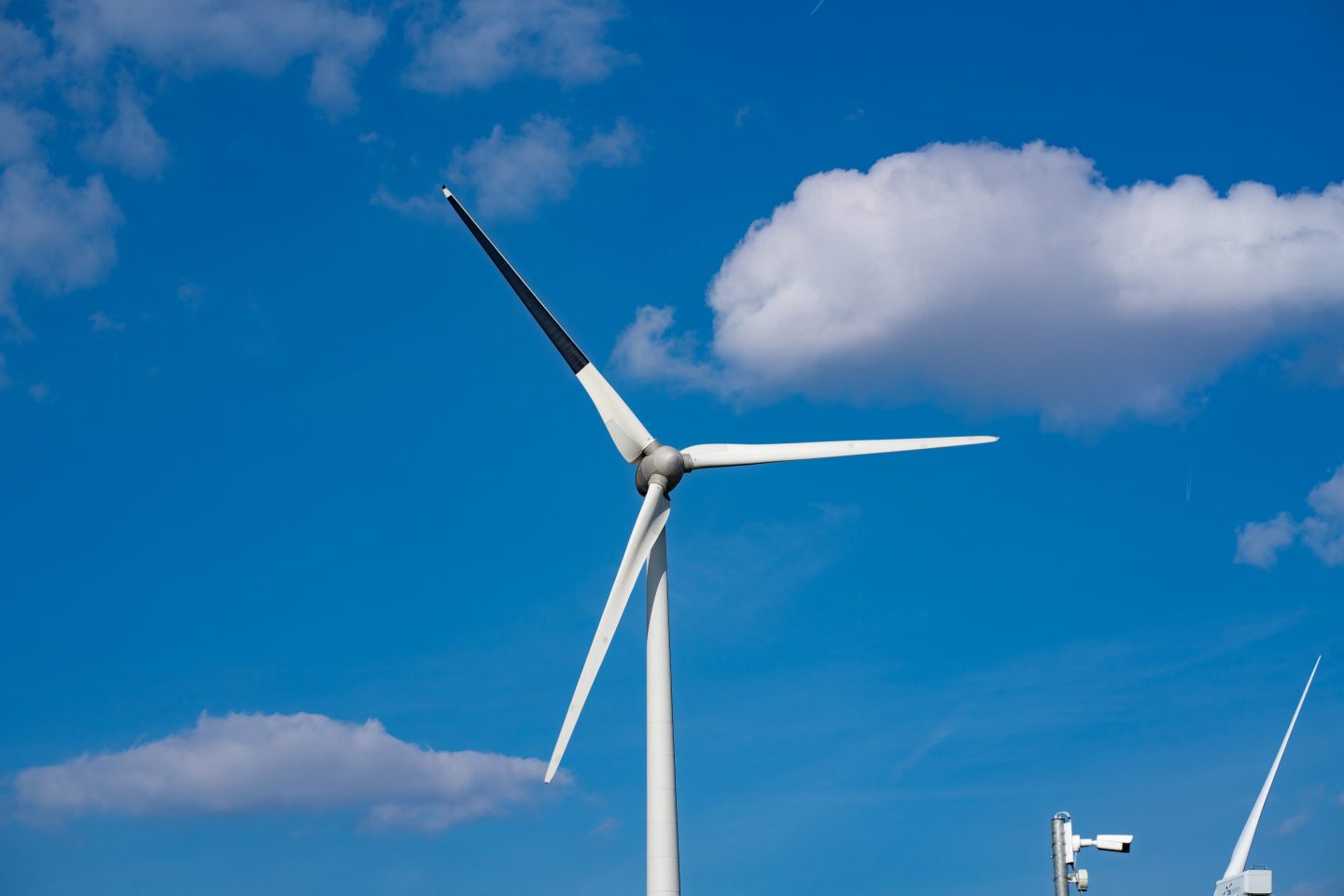 A turbine with one blade painted black at RWE's Westereems wind farm in Eemshaven, Netherlands.
Courtesy of RWE

Birds—from eagles to wrens—share a deadly habit of blithely flying into wind turbine blades that, at their outer edges, can reach speeds of up to 170 miles per hour. The tools wind farm owners have been using to cut the casualty rate are often high-tech, complex, and expensive. Now, scientists believe they’ve hit on a surprisingly simple solution: painting one turbine blade black.

To save birds’ lives, the Glenrock wind farm run by PacifiCorp on a former coal mine in Converse County, Wyo., today has two observation towers manned by biologists who turn off nearby turbines when they detect eagles. There are also automated options: the Spanish company DTBird and DTBat sells an on-tower video system that detects birds and either emits warnings sounds or pauses the turbines when they come close—a system that is in use at Windpark Krammer in Zeeland, Netherlands, among other places.

Such solutions reduce bird deaths—at a cost. Travis Brown, PacifiCorp director of compliance, permitting and safety, notes that manning observation towers is “a lot of work.” And shutting down towers whenever a bird comes near halts power generation.

“You lose revenues, of course…and some renewable energy production,” says Arjen Schultinga, who is leading a bird deaths project in the Netherlands for RWE Renewables, a division of the German utility RWE. “You can imagine every time a bird flies by you have to stop for 15 minutes…it will have economic effects.”

Now, both RWE and PacifiCorp are testing a more low-tech—and less-invasive—solution: they are both running pilots where they paint one of the three blades on a series of turbines black. The inspiration? A small test at a wind-power plant on the Norwegian island of Smøla that found that paining one blade a dark color could cut avian deaths by a massive amount—more than 70%.

“If it works to the level of Smøla, it’s a sea change event. If we’re able to replicate it, it would be astronomical across the industry,” says Brown.

Exactly how many birds die via wind turbine each year is a mystery. The ground beneath turbines is rarely searched closely for bird bodies. And even if scientists comb an area regularly, the bodies of small birds are eaten so quickly by scavengers like foxes, raptors or even beetles that they are often missed, says ecologist Allix Brenninkmeijer, who is working with RWE on its rotor project.

The best we have are estimates and researchers generally agree that wind turbines kill millions of birds globally.

In a 2013 review of fatality monitoring reports at North American wind farms, ecologist K. Shawn Smallwood estimated there were 888,000 bat and 573,000 bird fatalities (including 83,000 among raptors) in the U.S. Two other studies published around the same time estimated 234,000 and 291,000 annual wind tower bird deaths in the U.S., respectively.

Those estimates are nearly a decade old, notes Taber Allison, director of research at the Renewable Energy Wildlife Institute (REWI), and don’t account for the massive growth of wind farms; megawatts (MW) of installed wind-energy capacity has almost tripled since Smallwood’s report. It also bears noting that these figures are only for North America. Since the U.S. and Canada account for about 20% of installed onshore wind installations, the global number of turbine bird deaths likely reaches well into the millions.

Wind turbine deaths are far lower than fatalities caused by birds’ biggest nemeses—cats and windows, but turbines seem to pose a unique risk to species that have long lifespans and few offspring, namely raptors, a group that includes hawks and eagles, says Roel May of the Norwegian Institute for Nature Research, the lead researcher on the Smøla test.

The killings of vulnerable populations of birds can be costly for wind farm operators. A Florida power company pleaded guilty in April to criminal violations of the Migratory Bird Treaty Act after admitting its wind turbine blades killed at least 136 golden eagles and that it had not received the required permits, which set limits and mitigation procedures.

The company’s conviction—after what the U.S. Fish and Wildlife Service called years of “blatant disregard of wildlife laws”—came with an $8 million fine, five years of probation and a commitment to invest $27 million in efforts to minimize future eagle deaths. It was the third time a big wind energy firm had been convicted for killing eagles in a decade.

The movement to “paint it black”—the title May and his co-authors chose for their Smøla study—can be traced back to a laboratory at the University of Maryland, where a professor of psychology named William Hodos, who’d begun his career studying the motivation of animals, started investigating why birds, especially raptors, were flying directly into wind turbines when they had “excellent” vision.

In 1999, Hodos posited that the problem was something called “motion smear”—the tendency of fast-moving objects (i.e. turbines) to become seemingly transparent because the retina cannot keep up with their speed, leading birds to think a spinning rotor is just fine to fly through.

To test this hypothesis, Hodos used a pattern electroretinogram laboratory test on birds—specifically, American kestrels. The process measures retinal reactions to different stimuli. It turned out that painting one blade black elicited almost twice the reaction as three white blades, meaning birds were much more likely to see the spinning structure.

After Hodos’s 2003 study proved contrasting blades worked in the lab, the theory needed to be tested in nature.

In the Smøla test, researchers painted one rotor on four turbines black in 2013. By the time May and his colleagues published the results in 2020, they found that annual bird deaths dropped roughly 72% on average at the painted turbines compared to unpainted ones.

The “paint it black” paper zipped around the wind power world.

“The appeal for this was the fact that if its efficacy was proven it would be a potentially very low cost way to have a meaningful impact on reducing avian fatalities in wind facilities,” says Robb Diehl, a research ecologist at the U.S. Geological Survey (USGS) who is working on the PacifiCorp project.

RWE recently painted rotors on seven turbines at its Westereems wind farm in Eemshaven, Netherlands—a zone with higher than average bird numbers and bird deaths—and will compare annual deaths at those turbines to fatalities at seven nearby unpainted units and to the prior year’s known toll of 177.

According to RWE project leader Schultinga, the pilot program, which runs through 2024, costs about €600,000 (split between the company and government), including turbine down time, painting and research. To paint a blade, painters mount a window washer-like platform and apply two coats. The process takes three to four days, RWE says.

For its part, PacifiCorp is starting to paint one rotor on 36 turbines at its Glenrock wind farm in Wyoming. The cost to paint the turbines is $500,000 to $700,000, Travis Brown says.

Both projects involve more than applying a layer of paint. The two companies had to request exemptions from strict FAA and European airline regulator rules requiring white or off-white blades, and they will gather comment from pilots on whether multi-colored rotors are distracting.

The companies will also study the effects on the rotors. Black paint adds weight, but only minimally: 13 kilograms to a 9,000 kg blade, according to Schultinga. Black paint absorbs heat—white paint reflects it—warming up the turbines. Schultinga says temperatures over 65 degrees Celsius could degrade the blade’s glass fibers and resin. Temperature sensors embedded into blades have so far not recorded dangerous temperatures.

Ultimately, those testing black blades are hopeful that paint will be the low-tech solution that helps the industry save birds and ultimately flourish.

“If a technology or an approach can be discovered that is relatively simple to implement and is effective at reducing mortality, and at the same time allows energy production to continue uninterrupted, that’s an approach more likely to be adopted in a widespread fashion,” says Diehl of the USGS. “That’s why it’s appealing to us.”