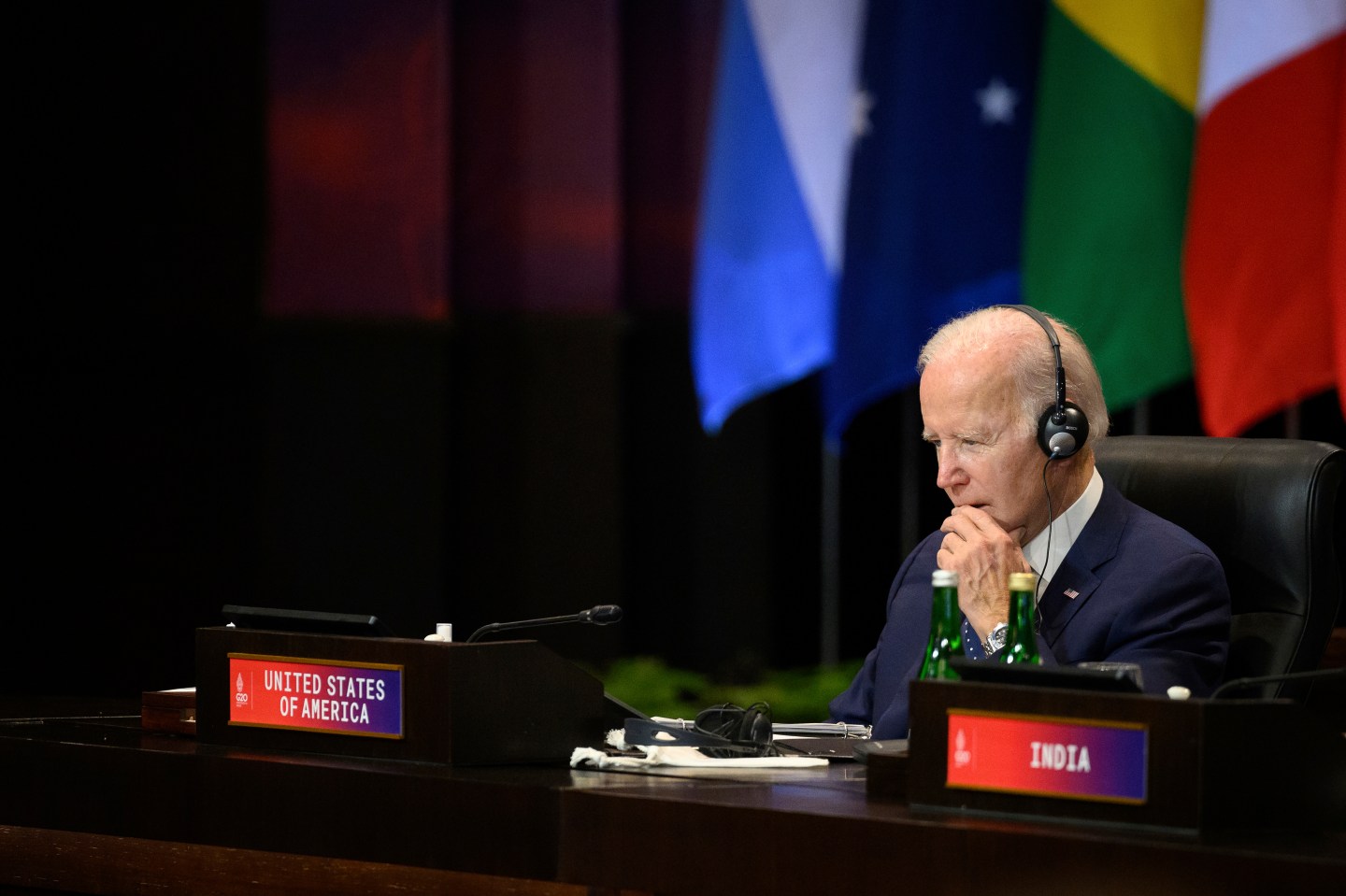 Leaders of the world’s largest economies appeared ready Tuesday to convey a strong message from most condemning Russia’s invasion of Ukraine, as President Joe Biden and Ukrainian President Volodymyr Zelensky pressed the group to maintain pressure on Moscow over its nine-month war that has devastated Ukraine and roiled the global economy.

A draft declaration by leaders of the Group of 20 major economies under discussion Tuesday echoes the condemnation of Russia’s war on Ukraine by the United Nations, while acknowledging differing views among members. The careful wording of the statement reflects tensions prevailing at the gathering, which includes leaders from Russia and China, and the challenge facing the U.S. and its allies to isolate Russian President Vladimir Putin’s government as some nations seek to avoid becoming entangled in antagonisms between the big powers.

The statement seen Tuesday by The Associated Press “deplores in the strongest terms the aggression by the Russian Federation” and “demands its complete and unconditional withdrawal from the territory of Ukraine.” The G-20 draft statement also noted there were different views on the situation and sanctions against Russia, saying that the G-20 was not the forum for resolving security issues.

At the summit, Zelensky joined Biden in trying to persuade the G-20 to further isolate Russia diplomatically and economically, despite a souring global financial outlook that has tested many nations’ resolve.

Inflation and slowing economies are weighing on countries that have imposed penalties on Russia for starting the war. Higher costs for energy and food have destabilized business activity around the world, as much of Europe prepares to brave the winter without imports of Russian natural gas.

In opening the summit, host Indonesian President Joko Widodo impressed on the gathering what’s at stake. “If the war does not end, it will be difficult for the world to move forward,” he said.

In a video address to the leaders from Kyiv, Zelensky reiterated 10 conditions for ending the conflict that began in February, among them a complete withdrawal of Russian troops and full restoration of Ukrainian control of its territory. He spoke days after Ukraine retook the strategic city of Kherson from Russian forces, in his country’s latest step in a counteroffensive that has forced Moscow to withdraw its forces from previously-occupied areas.

“Ukraine should not be offered to conclude compromises with its conscience, sovereignty, territory and independence,” he said. “Ukraine has always been a leader in peacekeeping efforts, and the world has witnessed it. And if Russia says that it supposedly wants to end this war, let it prove it with actions.”

The European Council president, Charles Michel, also urged other global powers to intensify pressure on Russia. But it was unclear how many nations would embrace the relatively tough language in a final statement.

At the summit, Biden held a bilateral meeting with Turkish President Recep Tayyip Erdogan, who played a pivotal role this summer in brokering a deal to open up Ukrainian grain exports to ease global food shortages. Biden also met briefly with Indian Prime Minister Narendra Modi whose cooperation is needed to secure a U.S.-sought price cap on Russian oil to limit the profits Moscow uses to invest in its defense base.

The U.S. and its allies have responded to Russia’s invasion of Ukraine with export controls and other sanctions, making it harder for Russia’s military to access key technologies and resupply with drones, artillery and other weapons.

Chinese officials have largely refrained from public criticism of Russia’s war, although Beijing has avoided direct support of the Russians, such as supplying arms. Biden said that during his meeting Monday with Chinese President Xi Jinping they discussed the war and “reaffirmed our shared belief” that the use or even the threat of nuclear weapons was “totally unacceptable” — a reference to Moscow’s thinly veiled threats to use atomic weapons as its invasion of Ukraine has faltered.

Xi told G-20 leaders the global economy should not be weaponized.

“We must resolutely oppose the attempt to politicize food and energy issues or use them as tools and weapons,” he said in translated remarks.

After meeting with Xi, French President Emmanuel Macron said they had called for “respect of the territorial integrity and sovereignty of Ukraine.”

In a tweet, Macron said France and China were determined to “put an end to the escalation of the war in Ukraine and deal with its consequences.”

The summit schedule does not include the customary “family photo” of leaders, avoiding a potentially awkward moment of interaction with the Russian representative, Lavrov.

U.S. national security adviser Jake Sullivan said no one in the U.S. delegation had plans to meet with Saudi Crown Prince Mohammed bin Salman after Biden accused Saudi Arabia of siding with Russia by leading the OPEC+ cartel to cut oil production last month in a bid to sustain the elevated energy prices that Russia uses to fund its war in Ukraine.

Sunak, who took office last month after the disastrously short tenure of Liz Truss, has promised to continue his conservative predecessors’ steadfast support for Ukraine. He and Biden were set to strategize during their Wednesday meeting on new ways to bolster Ukraine’s defenses for the long haul.

Meloni has pledged to continue to provide arms and aid for Ukraine, but questions remain over her far-right coalition’s commitment to stand up to Russia. She was to meet with Biden privately on Tuesday afternoon.

One leader who will be absent is Cambodian Prime Minister Hun Sen, who tested positive for COVID-19 after his arrival in Bali and said he was returning home. So far, no other leaders are known to have tested positive, though many of those in Bali also attended meetings with Hun Sen just days ago during a summit of the Association of Southeast Asian nations.

At a side-event hosted by the Partnership for Global Infrastructure and Investment — a Group of Seven-backed global development effort aimed at providing an alternative to China’s “Belt and Road Initiative” — Biden, European Commission President Ursula Von der Leyen and Widodo announced the commitment of $20 billion to help Indonesia cut its reliance of fossil fuels and meet global emissions reductions commitments.