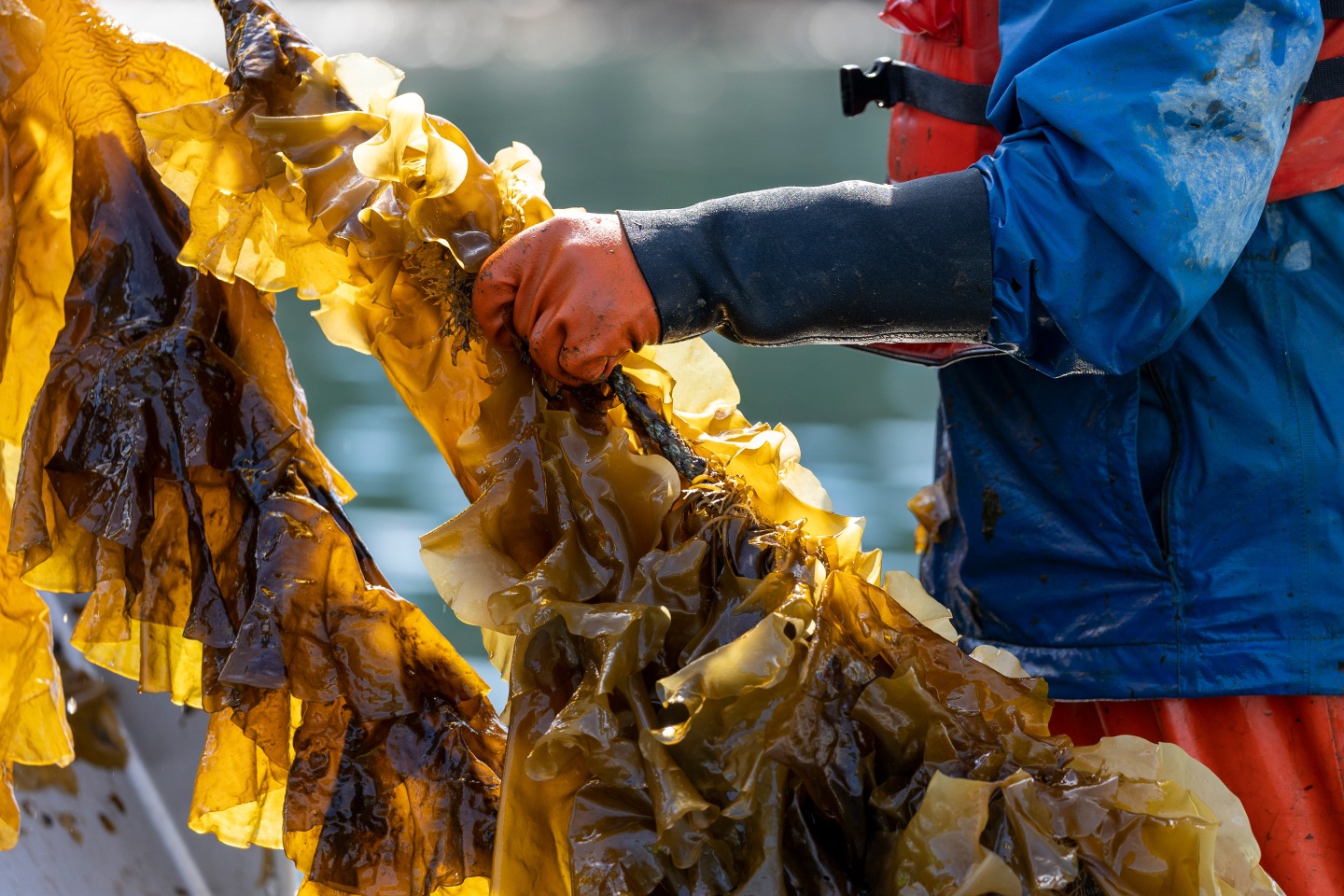 Seaweed is a vastly underutilized resource for food and carbon sequestration.
Courtesy of Jeff Siebert/WWF

Every winter, Briana Warner searches for scraps of seaweed from the cutting room floor, so she can spread it over her garden before putting it to bed for the season, but it’s often gone. “I work at a seaweed company, and even then it’s hard to get hold of,” the CEO of Atlantic Sea Farms says with a laugh. “The farmers take the scraps at the end of every week so they can feed it to their pigs. It’s in high demand.”

Seaweed is having its moment in the sun: Use of the marine plant is a rapidly growing trend that could aid in everything from global food security to climate change. Seaweed grows quickly, contains many vitamins and minerals, and produces up to 11 times the biomass of wheat and corn. It’s vastly underutilized despite its rapid growth rate, and recent studies reveal it could absorb as much carbon as the Amazon.

But despite its far-reaching benefits, America has been slow to adopt seaweed farming. In fact, around 95% of edible seaweed in the U.S. is imported. This is in part the result of an arduous and expensive permitting process, as well as a lack of public understanding about the benefits of seaweed and how it can be farmed.

The seaweed business is worth an estimated $14 billion globally. Though America’s seaweed industry is relatively nascent, there are signs that the market is shifting domestically: The amount of U.S. imports has been declining, even as consumption has risen by around 7% a year. A recent projection for the seaweed snacks market showed that 30% of global market growth will originate in North America.

Oceans cover more than 70% of the world’s surface and yet contribute to 2% of the world’s food. Seaweed remains an untapped food source potential. The UN’s Food and Agriculture Organization even went so far as to describe seaweed as a “precious ally” in the fight against hunger.

Research published in September revealed just how extensive ocean forests are—covering an area twice the size of India—amounting to a vast trove of nutritious food that requires no additional resources to produce. The study found these forests produce, on average, between two and 11 times as much biomass per area as intensely farmed crops such as corn and wheat, meaning they could hold the key to fighting food insecurity.

Seaweed is an incredibly resilient organism, and some species, such as giant kelp, can grow up to two feet a day and as tall as 175 feet. It is also highly nutritious, containing high levels of protein, essential minerals, and vitamins.

“Seaweed has historically been assigned to the specialty food aisle and, as a result, has remained largely inaccessible to the public,” says Eliza Harrison, program manager for Ocean Rainforest, a company that grows seaweed for animal feed, food, and cosmetic producers. “By exploring alternative applications, such as meat replacement products, seaweed could be incorporated into more familiar foods—thereby increasing consumption within the U.S.”

Still, in the U.S., seaweed farming is far from mainstream. Although seaweed is part of the daily diet in Asia and among coastal indigenous people in North America, it remains a niche ingredient in most of the Western Hemisphere.

“We have been slow to adopt seaweed farming,” says Paul Dobbins, director of seaweed and shellfish farming for WWF U.S., “in part because there needs to be a market for it.”

Numerous recent studies have highlighted seaweed as one of the most viable solutions to climate change, including the recent September study which estimated that kelp may take up as much carbon as the Amazon rain forest.

“Seaweed has all the features required to be classified as a blue carbon habitat and a massive carbon sink,” write the authors of a study published in May in Renewable and Sustainable Energy Reviews. It notes that seaweed farming provides potential alternatives for future energy, decarbonization, food security, and mitigating global climate change.

There are barriers to the implementation of such operations—including farm permit acquisition, a lack of farming knowledge, and little consumer demand for the product.

“Seaweed farming could contribute to carbon sequestration in the deep sea, but there are many ‘buts,’” cautions Schery Umanzor, assistant professor of aquaculture at University of Alaska Fairbanks. “In brief, seaweeds may be one of the hundreds of strategies we need to mitigate climate change.”

Alongside acting as a natural carbon sink and a nutritious snack, kelp has also been utilized in some more innovative experiments. In Maine, a startup named Running Tide is pioneering a model that uses kelp to pull carbon dioxide from the atmosphere. In Alaska, GreenWave, a company started by a former fisherman, is training indigenous communities to build kelp hatcheries. And in California, a dairy producer is trialing a seaweed-derived feed which reduces the amount of methane cows release when they burp.

Considering that one cow belches 220 pounds of methane each year, equivalent to burning 900 gallons of gasoline, that could make quite a difference.

Along the coastlines, seaweed can provide a sustainable livelihood for communities that traditionally relied on fishing, one seaweed farming benefit that Warner’s company has been focusing on.

Atlantic Sea Farms was the first, and is still the biggest, seaweed farm in the U.S. The Maine-based company opened in 2009, with the goal of bringing job security to coastal fishers, who have seen their livelihoods decimated owing to climate change, new federal regulations designed to protect whale populations, and overfishing.

“In Maine, lobster fisheries are pretty much the dominant way that people make money,” Warner explains. “We’re finding ways for fishermen to diversify their income as climate change increasingly threatens the fisheries they work in.”

Last year alone, the company produced around 1 million pounds of kelp with 30 of their partner farmers, who are provided with kelp seed, training, and infrastructure to start operating.

“This feels like the most exciting climate resilience story we’ve seen,” Warner continues. “They’re farming something that is done with no arable land, no fresh water is used, and carbon and nitrogen are taken out from the water, making the ocean healthier.”

Raising awareness of how to farm seaweed and the algae’s capabilities is crucial, Dobbins notes. “There is a lack of understanding about how it is farmed. How do you create the seed? How do you design and engineer a farm? How do you process it? How do you market it?”

Companies like Blue Dot Sea Farms, with their “Seacharrones”—a seaweed take on pork chicharrones—and Blue Ocean Goods—which partners with chefs to put seaweed on plates—have been working hard to change this.

“It’s a strategically important crop for food security,” says Dobbins. “But we don’t see seaweed farming in our waters the way you would if you lived in one of the countries in the West Pacific that have top-producing seaweed industries.”

The industry, according to Dobbins, has expanded by 8% year on year since 2010. “If it continues at that pace seaweed will surpass potato production by around 2051.”

Seaweed may seem like a wonder crop, but there are still numerous barriers that need to be overcome in order for it to surpass potato production: A lack of access to capital for potential farmers, a public acceptance of seaweed farming, and a more streamlined permitting process all stand in the way of growth, Dobbins notes.

However, Warner of Atlantic Sea Farms believes that the state-led permitting process, which can take up to three years in some states, will ensure the industry grows responsibly. Currently, states have jurisdiction over the three miles of ocean closest to the coastline. “We’re creating an entirely new market for seaweed in the U.S.,” she explains. “But it needs to be thoughtful. It needs to be done carefully.”

There have been challenges in Asia’s intensive seaweed farming process, including changes in marine ecosystems and an increase in disease.

“We don’t want to make the same mistakes we made in terrestrial farming,” adds Dobbins. “There’s a lot going for seaweed, but we want to make sure it’s going to be done well.”