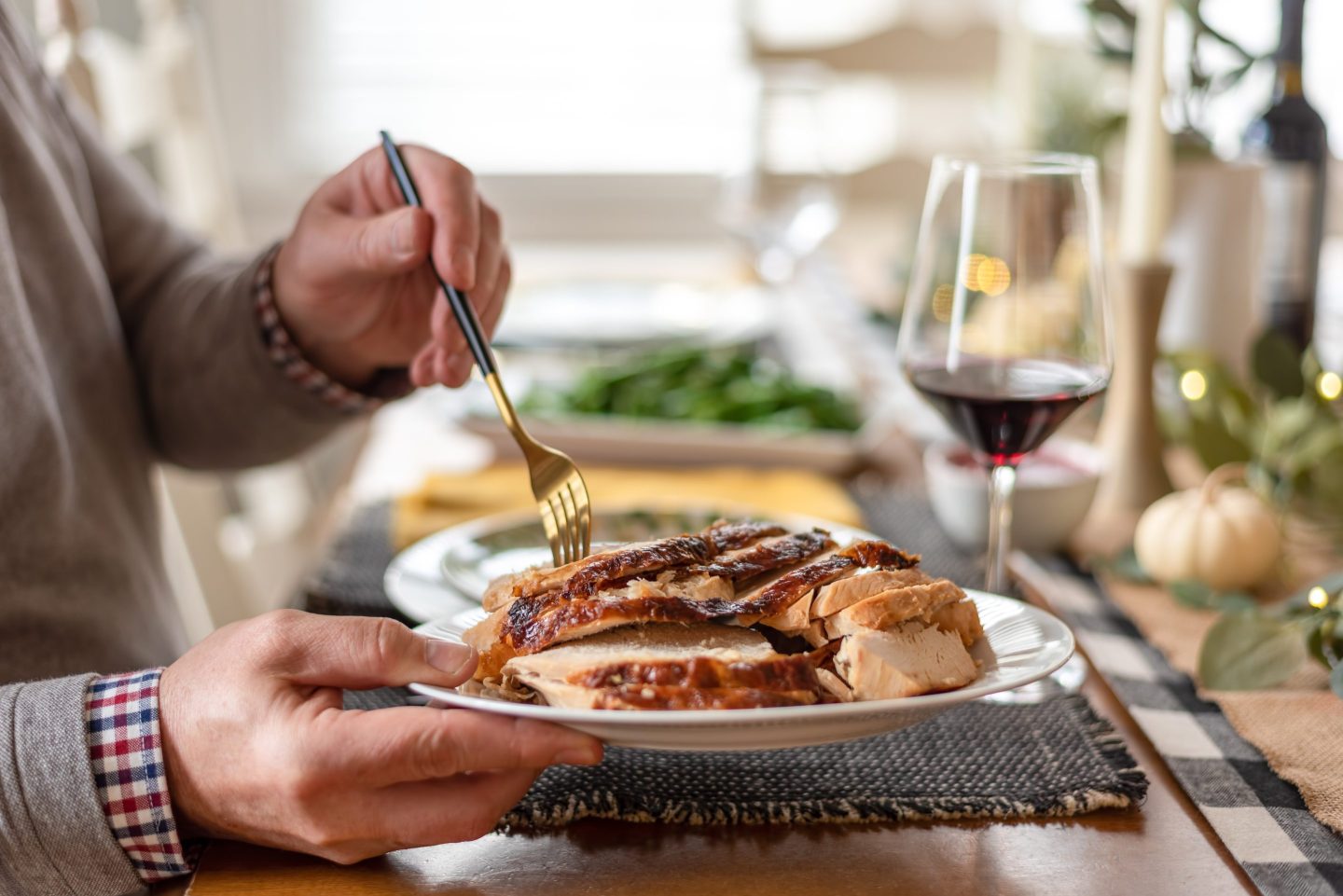 Thanksgiving dinner is expected to be more expensive this year thanks to inflation, elevated labor expenses, and a round of avian flu hitting U.S. turkey supplies.
Kristen Prahl/Getty Images

Despite sky-high inflation still hanging around and an avian flu that killed over 6 million turkeys, 87% of Americans are still planning on serving up turkey for their holiday meal.

But analysts at Wells Fargo say dining out for Thanksgiving may be more cost-effective this year when you factor in the time and money most Americans spend on this big meal. “Dining out can be costly, but it may be a better value this year than one might expect. Rising commodity costs impact grocery stores more directly than restaurants,” according to the report.

Why? Well, for starters, there’s been less of an inflation hit to the cost of dining out—up an average of 5.79% from November 2021—than grocery costs, which have seen 9.81% increase on average, according to analysts’ review of Consumer Price Index (CPI) data.

When it comes to Thanksgiving specifically, analysts say year-over-year cost increases in eggs (up 32.5%), butter (25.8%), and flour (17.1%) are some of the biggest contributors to the overall price jump consumers are facing when buying ingredients for the big meal.

But if you’re a traditionalist who likes to do it all by hand, you better not wait to purchase your turkey. At many of the retailers that typically have the lowest-priced birds—including Aldi, Lidl, and Walmart—frozen Thanksgiving turkeys have already hit the shelves (and, in some cases, sold out). Those who shop early will likely enjoy more selection on size and type of turkey, and typically lock in better deals and discounts.

That can add up to real savings since there’s a big difference in overall turkey costs, depending on what kind of bird and size you want to buy. The national average prices for frozen whole turkeys as of Nov. 4 were between $1.14 for hens (8 to 16 pounds) and $1.11 for toms (16 to 24 pounds), according to the USDA. That’s down slightly from last week's prices as seasonal sales start to kick in, but up about 5% to 7% from last year’s prices.

Fresh, organic, and heritage turkeys are going to set consumers back a lot more. Not only do these birds tend to be generally more expensive because of required growing conditions, producers of these fresh birds were more likely to be impacted by the latest outbreak of avian flu. Take turkey prices at Lidl in New Jersey. A Shady Brook Farms frozen turkey was on sale for $0.49 per pound starting Nov. 2 (with a $25 purchase) compared to a Plainville Farms frozen, organic young bird for $3.49 per pound. Butterball frozen, premium, all-natural turkeys were selling for $0.98.

Half of those hosting Thanksgiving this year report they bought their turkeys between late October and early November, according to a recent survey from Morning Consult. Only 11% plan to get their turkeys the week of Thanksgiving (likely those who are opting for fresh turkeys, or urbanites with tiny freezers). That’s down from the 29% of shoppers in 2021 who planned to buy their turkey only a few days before Thanksgiving. The uptick could be due to more Americans hoping to lock in discounts, with nearly three out of four shoppers saying they plan to buy their 2022 turkey on sale.

To bring down the overall cost of the meal, most hosts are focusing on snagging deals and discounts that grocery stores like to roll out this time of year, according to Morning Consult’s survey. A significant number are also planning to cut down on the number of side dishes on their Thanksgiving table—and more than a few are looking to cut back on their regular monthly grocery costs to afford the meal.

But if whipping up this huge dinner doesn't bring you joy, you might take a second look at the take-out menu. The narrowing of the gap between grocery and dining-out costs means some Thanksgiving dishes at restaurants may be closer in price to the food Americans prep at home, which analysts say could save time and energy. Especially when you consider that Americans hosting Thanksgiving estimated that they spent 9.6 hours cooking and preparing the big dinner last year.

“In other words, you could spend about the same on a dish at a restaurant as you would preparing it at home,” the report stated.