The race of her life: How Nnenna Lynch plans to chair the New York City Marathon 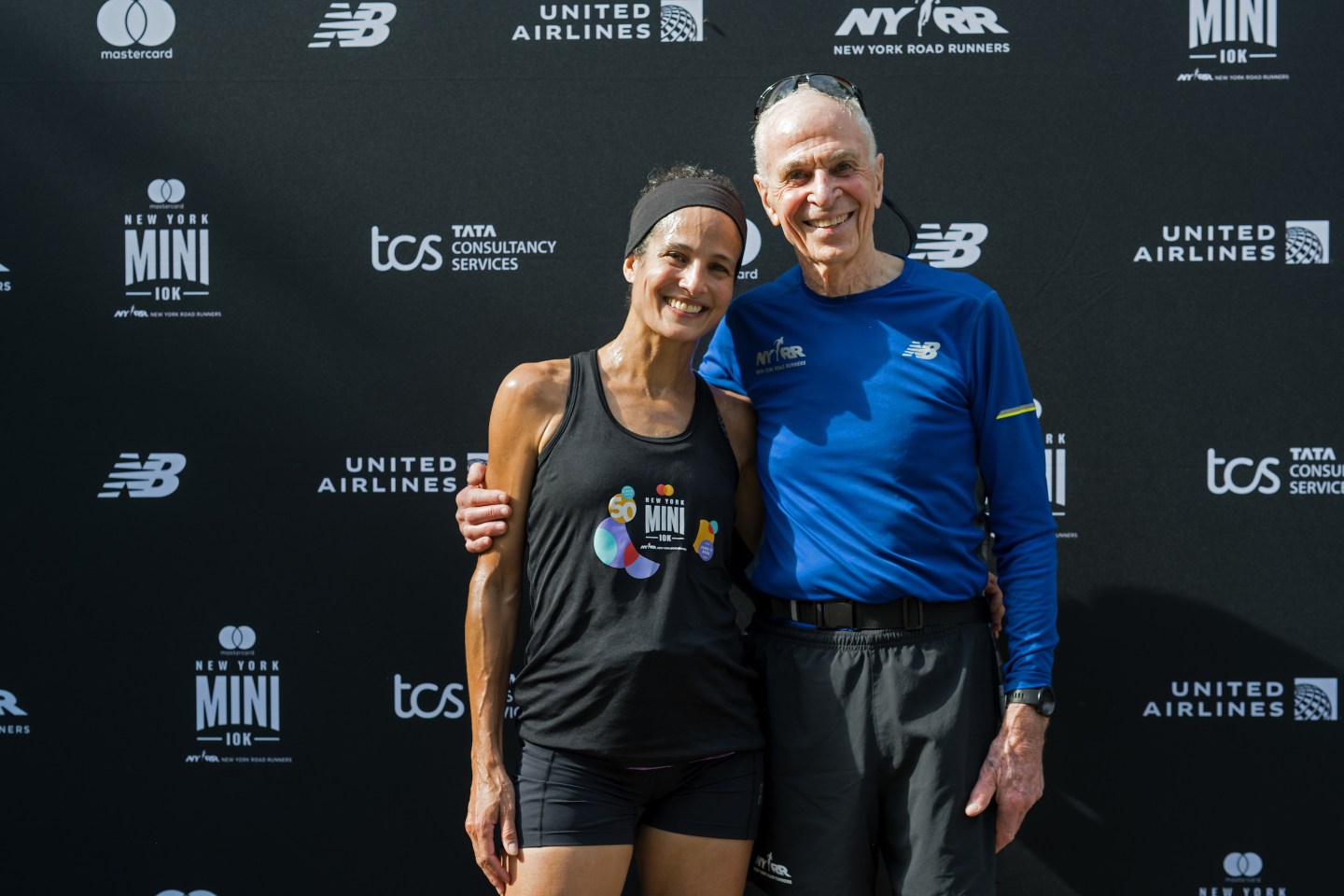 If you are ever dropping by Café Amrita on Manhattan’s Upper West Side, take a look around. At one of the tables you might spot a seemingly odd couple, 88-year-old George Hirsch and 51-year-old Nnenna Lynch, having a latte and a cappuccino.

Best not to disturb them, though—they’re planning the biggest marathon on the planet.

That would be the TCS New York City Marathon, the annual event which typically sees more than 50,000 runners snaking and sweating through the city’s five boroughs. It’s the flagship event of the New York Road Runners, the world’s biggest running organization.

After its COVID-related cancellation in 2020, and a scaled-back event for its 50th anniversary last year, the marathon is finally back at full strength. And for the first time in 17 years, the baton of the organization’s board chairmanship is being passed.

Hirsch figures that at 88, he is coming to the finish line of that particular race. It’s another impressive run to add to his résumé, that also includes being the longtime publisher of magazines like New York and Runner’s World.

Nominated to replace him is Lynch, the first woman and first African American to assume the role. Right now she is in the mode of “shadow chair,” she says, learning all she can from Hirsch—sometimes at NYRR headquarters in Midtown Manhattan, sometimes over their regular chats at Café Amrita—before the reins get officially passed in June 2023.

“I’m learning a ton from him,” says Lynch. “He’s a beloved icon in the sport. But I am a different person, so it’s natural that I would approach the role a little differently.”

While it is daunting to replace a New York City institution like Hirsch, Lynch’s own résumé is about as gold-plated as you can get: an elite runner herself; a senior adviser in New York Mayor Mike Bloomberg’s administration; and the founder and CEO of real estate firm Xylem Projects. She’s not just a former Rhodes Scholar, she’s cohead of the Association of American Rhodes Scholars.

However, Lynch is facing perhaps her biggest test of all before she has even assumed the role. A New York Times report in October revealed that Lynch tested positive for a performance-enhancing drug (pseudoephedrine) in 1996, which led to a three-month suspension. The news has since complicated the handover as the organization has a zero-tolerance policy.

“We are reviewing this new information regarding the recently named future Chair of the NYRR Board, who would assume the new role in June of 2023. As a global leader in the clean sport movement, we continue to strongly advocate against doping while also enforcing the anti-doping policies of our running events,” NYRR said in a media statement.

According to a statement provided from Lynch to Fortune, the incident involved a doctor-prescribed Claritin for asthma, was never concealed, and under modern testing standards would be a non-issue.

The organization is certainly no stranger to turbulence, especially over the past few years.

One cause was the pandemic, forcing event organizers worldwide to scrap most plans throughout 2020 and 2021. Deprived of those revenue sources, the organization was hobbled, and had to furlough or lay off dozens of staffers.

The second was the departure of CEO Michael Capiraso in late 2020, following complaints about the work environment and lack of commitment to supporting diversity. He was replaced on an interim basis by Kerin Hempel, who still helms the organization in the lead-up to this year’s marathon on Nov. 6.

“The second we became aware of those issues, we jumped into action,” says Lynch, who has been on the organization’s board since 2014. “We made some changes, like hiring a vice president of diversity and inclusion, and created a new diversity committee. It’s something we constantly have to be thoughtful about, and ask, ‘What more could we be doing?’”

Following this year’s marathon, the organization’s leadership will transfer to newly appointed CEO Rob Simmelkjaer, a former executive at ESPN and NBC Sports.

The mother of all logistical nightmares

Perhaps fortunately for Lynch, she won’t have to manage the gritty details of marathon setup, which are enough to scramble any brain. That’s more the domain of CEO Hempel and race director Ted Metellus, who have to figure out a thousand-piece puzzle involving routes, road closures, permits, volunteers, security, vendors, sponsorships, and more. It’s a truly “mammoth” undertaking, says Hirsch.

Meanwhile, the board of directors has more of a big picture view, says Lynch, overseeing not just the marathon but a total of 45 events a year—many of which are logistical nightmares in their own right, like the NYC Half and the Brooklyn Half.

“That’s a lot of trains to keep running,” she says. “The CEO reports to the chair, so it’s an important role for collaboration, oversight, and governance. The board works best when keeping our eyes on long-term strategy, and making sure the organization is well-functioning.”

In particular, one personal goal is to reach into more communities, and make the organization itself and its roster of runners more diverse than they have been in the past. As Hirsch says from watching a recent 10-mile race in the Bronx, “There were not enough people of color crossing the finish line. That means we have more work to do.”

The next stage in that work is Nov. 6, the first time that the marathon will be back to pre-pandemic participation numbers. After those early days of COVID, when no one really knew how things would play out, it was unclear if the organization could ever get back to that level.

“This gives me a good warm feeling that we’re back,” says Hirsch, who was one of the original founders of the five-borough marathon, and whose very first race was the Boston Marathon in 1969. “Getting the full field of 50,000 runners isn’t just important for the organization, but also for the city. We all need this.”

In marathon terms, Lynch figures she’s about a quarter of the way through the race since the initial announcement was made this past June, and the official handover won’t take place until next summer, if all goes to plan.

But as any marathoner will tell you, the race’s first quarter tends to go pretty smoothly. The real challenges—the ones that test you in new ways and take you to your mental and physical limits—are now upon her, with one of the world’s biggest races about to take place and the planned leadership change currently under review.

“Having been a competitive runner informs how I approach just about everything in life,” says Lynch, a middle-distance specialist who was NCAA champion for Villanova University in the 3,000-meter run.

“But when you are prepping for a big race, it is all about peaking at the right time, and I would say this experience is not like that. Taking on the role of chair is not a one-day thing. It’s really about a long-term approach to leadership.”