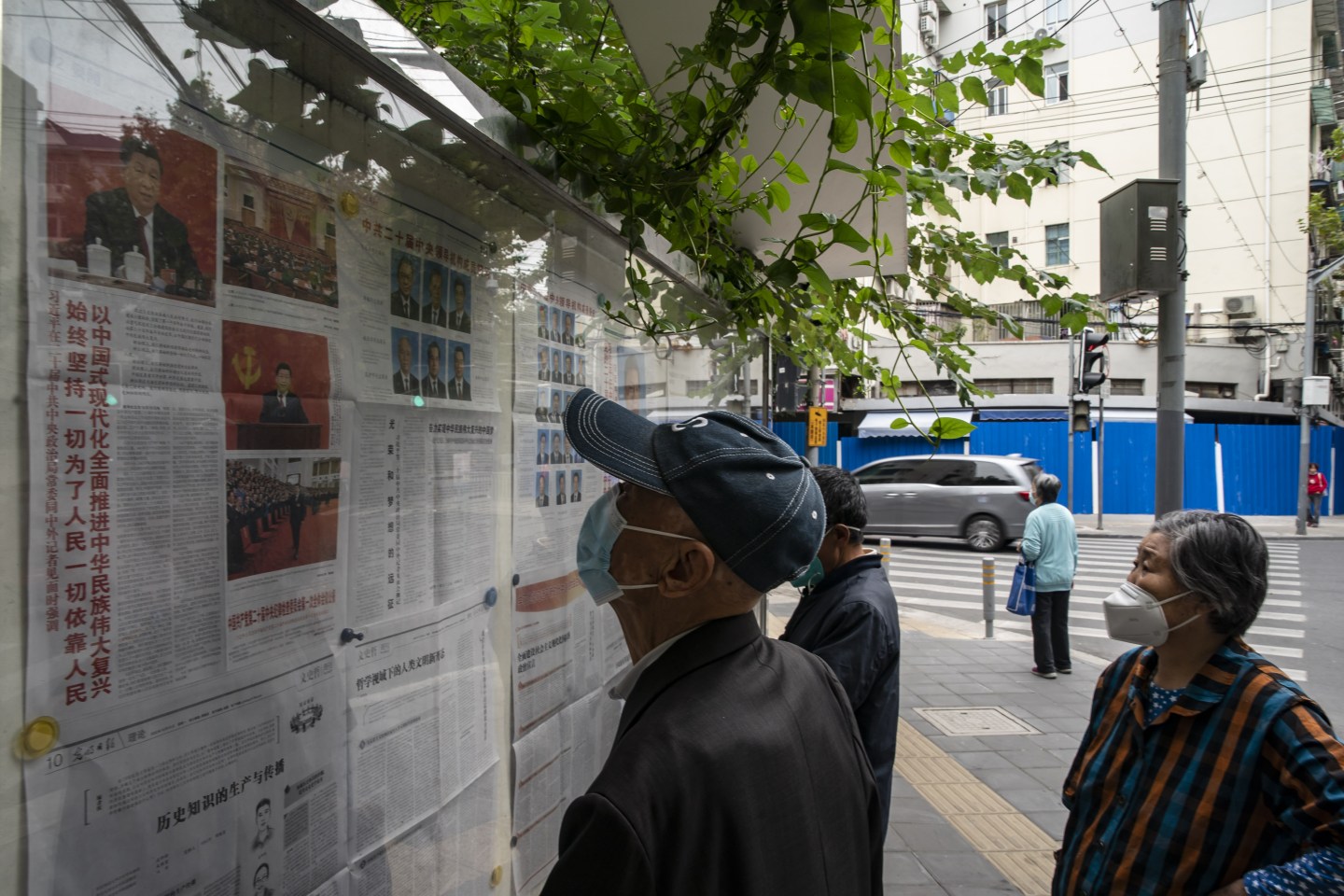 Nobody is quite sure who wrote it, when it was written or if it’s even true. But a screenshot of four paragraphs detailing a China reopening plan was enough for traders to scoop up stocks for two days running.

The unverified post, which contained black characters on a white background with no identifying marks, first began circulating on Monday night in WeChat social messaging groups filled with analysts and fund managers, according to accounts by a dozen investors who asked not to be identified. By the next morning, it was spreading like wildfire.

The screenshot claimed that China’s No. 4 official Wang Huning — one of seven men on the powerful Politburo Standing Committee — held a meeting on Sunday of Covid-19 experts at the request of President Xi Jinping. It called Xi “big boss” and used “WHN” to refer to Wang in a bid to sidestep censors, who strictly manage messages and social media posts on China’s political elite.

Representatives at the meeting, which included members of the economic and propaganda departments, discussed “speeding up a conditional opening plan, with the goal of substantially opening by March next year,” it said.

The post gained more traction when it was shared at 11:26 a.m. by “96 Old Stock Trader” on Xueqiu, a Chinese-language financial platform. Less than 20 minutes later, prominent Hong Kong-based economist Hong Hao tweeted something similar — and stocks in the MSCI China Index were well on their way to a $320 billion rally. More gains on Wednesday brought the two-day total to $450 billion.

Even a fresh reaffirmation of the Covid Zero policy by the China National Health Commission late Wednesday failed to dampen traders’ enthusiasm. US-listed China stocks kept rallying after the commission asserted that the country would “firmly adhere” to its fight against the disease.

Investors have been looking for reasons to scoop up Chinese stocks, which are among the worst performers in the world this year as the economy grows near the slowest pace in four decades. Equities saw a historic rout last week after Xi consolidated power in a twice-a-decade personnel reshuffle, and the yuan weakened to a 14-year low.

Covid lockdowns, weak consumption and an ailing housing sector have all clouded the investment outlook in China. And now that Xi has put his allies in key positions, hope is building for steps to boost the economy at the next annual session of China’s legislature in March.

“Reopening is not a decision that can be made overnight,” said Hong, a partner and chief economist at hedge fund Grow Investment Group. “It has to be through careful study and communication. That is why most of us think that after the Twin Sessions in March is a good time to reopen.”

The episode is an illustration of how difficult it is to obtain accurate information in the world’s second-biggest economy, where internal government deliberations and leadership changes are closely guarded secrets. That means big policy shifts can often leak out in unusual ways, even if they aren’t immediately verifiable.

China has officially stayed mum on the rumors, with state media ignoring them the past two days. A spokesperson for China’s Foreign Ministry said they weren’t aware of the rumor during a regular press conference on Tuesday, and questions on the subject were scrubbed from the briefing’s official transcript.

On Wednesday, more rumors were afoot as the rally continued. Twitter user Shanghai Macro Strategist, who claims to be a China strategist and has more than 14,000 followers, posted screenshots purporting to be from two Chinese brokerages reporting upcoming changes to China’s Covid policies. The user declined to comment further in a message to Bloomberg News.

One screenshot showed Haitong Securities Co. saying a meeting would be held Friday to ease quarantine requirements and remove circuit breakers for flights, among other measures. The brokerage said the screenshot wasn’t true in an emailed reply to Bloomberg News.

The other screenshot cited three analysts from Tianfeng Securities Co. saying that virus controls would be loosened. When contacted by Bloomberg News, all three analysts said they weren’t aware of any information about Covid policy.

Even as the Communist Party offers little transparency and severely restricts press freedom, officials in Beijing discouraged investors from reading too much into international media reports on China.

“A lot of media reports, let me put it this way, they really don’t understand China very well and they have a short-term focus,” Fang Xinghai, a vice chairman of the China Securities Regulatory Commission, said in prerecorded remarks to Hong Kong’s banking summit on Wednesday. “I would advise the international investors to find out what’s really going on in China and what’s the real intention of our government by themselves.”