Low-wage workers suffer the most financially from abortion bans and restrictions in post-Roe U.S. 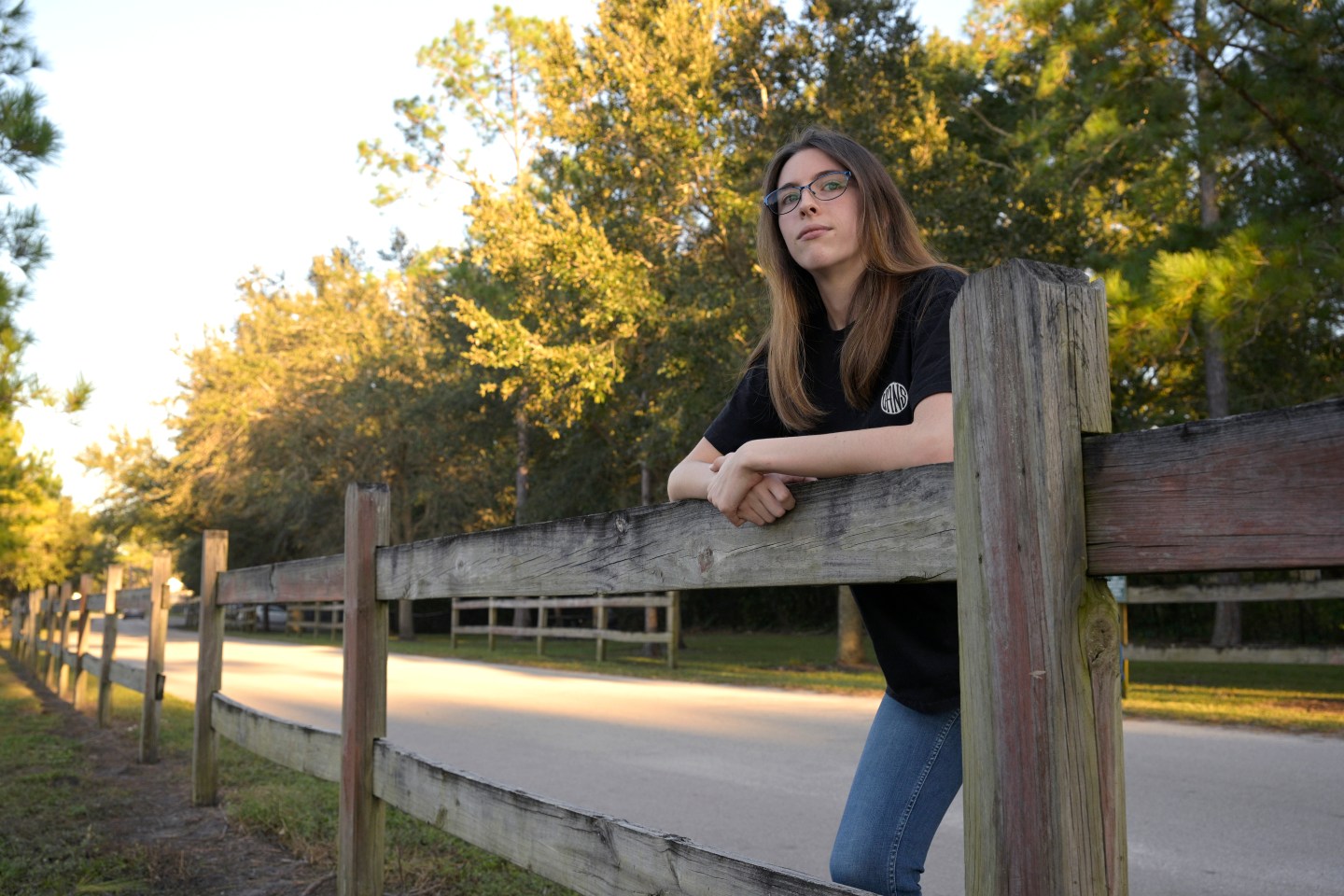 Alyssa Burns, 24, is photographed at a park on Oct. 7, 2022, in Orlando, Fla. It has always been difficult to be pregnant on the job and to raise a child, but especially so for low-wage workers. They are more likely to work in physically demanding roles with fewer labor protections and less flexibility than higher-wage jobs. When Burns, a warehouse worker earning $16 an hour, learned she was pregnant she came to the agonizing conclusion she couldn't go through with it.
Phelan M. Ebenhack—AP Images

A Texas mother of a toddler, scraping by on her husband’s income, was desperate to return to work but struggling to afford child care. A young Florida warehouse worker had barely left behind a turbulent past of homelessness and abuse only to be mired in debt.

When both women learned they were pregnant, they came to the agonizing conclusion they couldn’t go through with it.

“When you try to discuss the alternatives, you find the problems. If we could do this, where is the baby going to stay?” said Alyssa Burns, the warehouse worker who makes $16 an hour and was sharing two-bedroom apartment with her boyfriend and another couple when she found out she was pregnant last year. “We both work full-time jobs. My mom works. We can’t afford child care.”

There are wide-ranging reasons why women may seek to terminate their pregnancies but for those struggling to make ends meet, finances are inevitably part of the calculation. Now many of them will be thrust into a circumstance they can’t afford as abortion bans and restrictions take hold in half the country after the Supreme Court overturned the 1973 Roe v. Wade ruling guaranteeing abortion rights.

Three-quarters of women who seek abortions were low-income, meaning they had a family income below or up to double the federal poverty level, according to a 2014 study by the Guttmacher Institute, a science-based research group that supports abortion rights. More than half already had children and many worked in physically demanding roles with fewer labor protections and less flexibility than higher-wage jobs.

“A salaried employee with benefits is the type of person who generally does find a way with or without their employer support,” said Caitlin Myers, an economist at Middlebury College, who studies reproduction and the economy. “We are talking about a really economically fragile group of workers, often hourly workers, often shift workers with very unpredictable schedules for whom this becomes really overwhelming.”

Burns, 24, was able to swiftly end her just over six-week old pregnancy in March 2021 because Florida had no law against it at the time and the state’s current law bans most abortions after 15 weeks. But she said she is haunted by the idea that in a different state and a different time, she might have been forced to have the baby.

The Texas mother panicked at the same possibility. She learned she was pregnant in September of last year just as a Texas law banning all abortions after roughly six weeks of pregnancy took effect.

“I was so broken. I couldn’t fathom that it was happening,” said the 30-year-old hairstylist who, like Burns, shared her story through the women’s advocacy group MomsRising but requested anonymity for fear of facing harassment in her conservative Corpus Christi community. “I can’t afford this child. I am struggling with a child I already have.”

In the end, she was able to have an abortion in New Mexico with financial help from Planned Parenthood. Even so, she and her husband incurred $1,000 in expenses, including $500 in car rental. Her husband had to take unpaid time from his job as a cell phone tower maintenance worker.

If it hadn’t been for the Texas ban, she said she could have gone to a clinic 20 minutes away. Indeed, for many women living in states that would ban abortions, the average travel distance to the nearest clinic would rise from 35 miles to 272 miles, according to Myers’ analysis of a national database of abortion facilities, revised monthly.

Many anti-abortion advocates say the answer is not to make it easier to terminate a pregnancy but to widen the safety net and make it easier to have children. They argue Roe v. Wade hurt working women by discouraging employers and the government enact more generous benefits for parents.

“Abortion has been the privileged response to female poverty and the plight of low-wage workers in this country,” said Erika Bachicho, an anti-abortion legal scholar who believes more pressure should be applied on conservative states to strengthen policies around parental leave and child care.

But research tells a different story. Carrying an unwanted pregnancy quadruples the odds that a woman and her child will live below the federal poverty line, according to The Turnaway Study, a University of California San Francisco research project that tracked women who got access to abortions versus those who’d been denied them over a 10-year period. It triples the chances of the woman being unemployed.

Being denied an abortion often leads to increased rates of unpaid debt, poverty, evictions, and bankruptcies over the next five years, according to a recent study published by the National Bureau of Economic Research, which used the Turnaway study data to exam the credit history of women who couldn’t get abortions.

Those were some of the risks facing Burns, who left home at 18 and finished high school while living homeless. Although she had found some stability by the time she got pregnant, she was still paying off more than $7,000 in debt from breaking her rental lease a few years earlier when she left an abusive relationship.

Earlier this year, the Texas hairstylist moved in with her parents in Corpus Christi because life had become too expensive in Austin, where her monthly rent rose from $1,400 to $1,600 and putting her daughter in child care would have cost $600 a week. Her husband, who earns $50,000 a year with overtime, will join her once their lease term ends. With their parents able to watch her child, she was able to go back to work two days a week.

“We’ve been playing catch up for the longest time,” she said.

Catherine R. Pakaluk, an anti-abortion assistant professor of social research and economic thought at the Catholic University of America, acknowledges the unique difficulties for low-income women but does not believe abortion is the right answer.

“Having a baby is harder when you’re poor. But I don’t think the poor’s interest or the elite’s interest are served by eliminating a child conceived into difficult circumstances,” Pakaluk said. “That’s why the poor should be 100% the focus of any kind of policymaking.”

In reality, however, states with some of the nation’s strictest abortion laws are among the hardest places to raise children, especially for the poor, according to an analysis of federal data by The Associated Press. In Mississippi, for instance, access to pre- and post-natal care has dwindled since the Supreme Court ruling in June, making childbirth even more dangerous for poor women and children.

There is also a big disparity between the benefits that employers offer low-income workers versus high-income workers. Roughly 6% of private industry workers with an average wage in the lowest 10% had access to paid family leave, compared with 43% workers in the top 10%, according to the most recent survey by the U.S. Bureau of Labor Statistics, conducted last year. And only 38% of private industry workers with wages at the bottom 10% get paid sick leave, compared with 96% in the top 10%, according to a labor department study done in March.

Burns said she and her boyfriend dream of eventually having a family but they need stability first. She has been able to go to the dentist for the first time in her life, getting cavities filled, wisdom teeth removed and some crowns put in, accruing more debt that would have been difficult to handle with a baby.