One chart shows how dramatically a16z’s crypto outlays have fallen 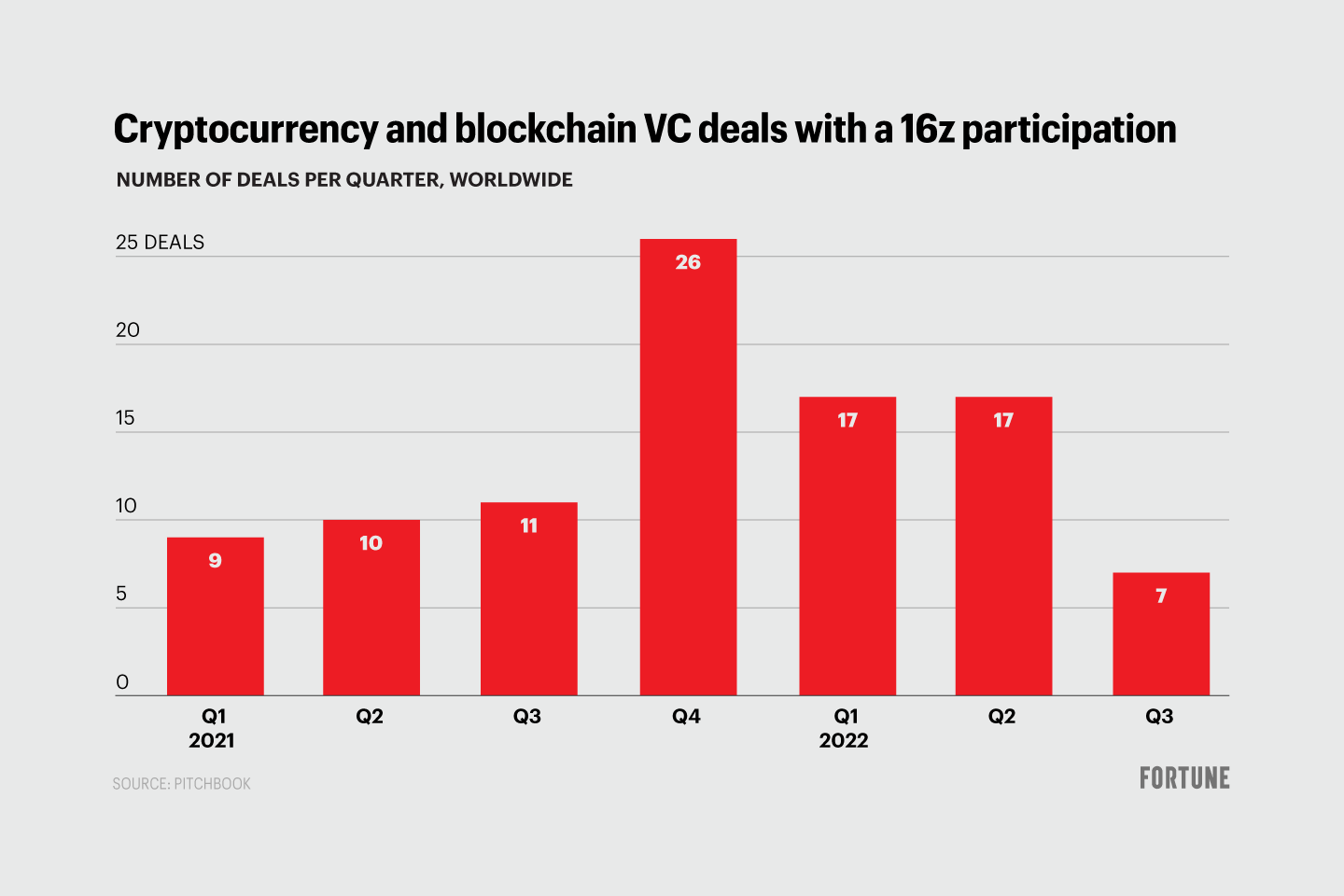 The weather may be getting chillier here in New York City, but it’s been icy cold in the crypto venture space for months.

Whether you’ve been reading or scrolling through Twitter lately, you’ve likely noticed a slowdown in funding for crypto startups. But just how much of a drop-off is actually hitting the industry?

Though the firm has continued doing deals, a16z crypto, which manages $7.6 billion in funds and raised a whopping $4.5 billion fund in May, participated in only seven crypto and blockchain VC deals in the third quarter of 2022, a huge drop from its peak of 26 deals in the fourth quarter of 2021, according to PitchBook data, and nearly 60% lower than the second quarter this year. The value of the firm’s investments, meanwhile, dropped from nearly $2.4 billion in the first quarter of this year to around $600 million last quarter, per PitchBook data. Of note, the value of a16z’s crypto deals in the third quarter of 2022 is still higher than the year-ago quarter. (A spokesperson for a16z said the firm couldn’t confirm these stats given there are deals yet to be publicly disclosed.)

Certainly it’s not just crypto—venture investing is down en masse over the past few months, as Jessica pointed out yesterday (though seed funding has proved more resilient, in crypto, too).

A16z declined to chat with me. But ex-a16z partner Katie Haun reportedly hasn’t been in a rush to deploy her new $1.5 billion fund for Haun Ventures, either. Per a recent story in The Information, Haun told the outlet that her firm still has “the vast overwhelming majority of our capital,” and that “we’ve been taking it very slow.”

My question is, if valuations have come down a lot, and these firms have tons of cash to deploy, why not take the opportunity to snap up lots of deals at lower prices? I recently asked Grace Isford, a principal at VC firm Lux Capital who focuses on fintech and Web3 investments, and she suggested that for crypto VCs in general, “it’s hard to know how active they’ve been recently because a lot of their investments could have also been made in stealth,” she posited. Isford did note that she’s heard some crypto funds are focusing more on liquid positions at the moment (meaning actual tokens versus equity investments) given compressed market prices. “There may be some good hedge fund opportunities,” she suggested, though Lux Capital doesn’t participate in such hedge fund strategies. Meanwhile a recent TechCrunch article suggested VCs are waiting for even lower valuations.

To be sure, many of these firms may have long deployment schedules, so they might not be in a rush to spend their money right now. And lots of crypto companies raised ample funds in 2021 or early 2022, and are likely not keen on raising a downround and taking a valuation cut (nor are their investors). “A lot of companies don’t need the capital right now,” Isford noted. She’s been less involved in Web3 over recent months, too, Isford told me.

We’ll have to see if the chill in the crypto venture space, alongside the broader drawdown in VC funding, will last in the coming quarters—and whether heavy hitters like a16z will remain content with their slower pace. My bet is things probably won’t get much more frothy anytime soon—but, these firms can’t wait forever to start spending their LPs’ money.

Call out: Are you a founder or investor in the crypto/Web3 space? I’d love to hear about what you’re seeing and hearing (and doing!). Send me a line: anne.sraders@fortune.com or DM @AnneSraders on Twitter.

- Banyan, a New York-based network for SKU data, raised $43 million in Series A funding co-led by Fin Capital and M13.

- Tellius, a Reston, Va.-based decision intelligence platform, raised $16 million in Series B funding. Baird Capital led the round and was joined by investors including Sands Capital Ventures, Grotech Ventures, and Veraz Investments.

- Bookkeep, a New York-based accounting automation platform, raised $6.6 million in seed+ funding. Fin Capital led the round and was joined by investors including TTV Capital, Argonautic Ventures, Lerer Hippeau, Haymaker Ventures, and others.

- StoryFit, an Austin-based machine learning and audience insights provider for the entertainment industry, raised $5.5 million in Series A funding. Refinery Ventures led the round and was joined by investors including Techstars, Elkstone Partners, Collective Capital Ventures, Alumni Ventures, and others.

- Cofertility, a Los Angeles-based egg donation, freezing, and donor matching company, raised $5 million in seed funding. Initialized Capital and Offline Ventures co-led the round and were joined by investors including Coalition Partners, Muse Capital, Arkitekt Ventures, and other angels.

- Best in Parking, an Austrian garage and car parking site operator, is considering an initial public offering valued at more than €1 billion ($979 million), according to Bloomberg.