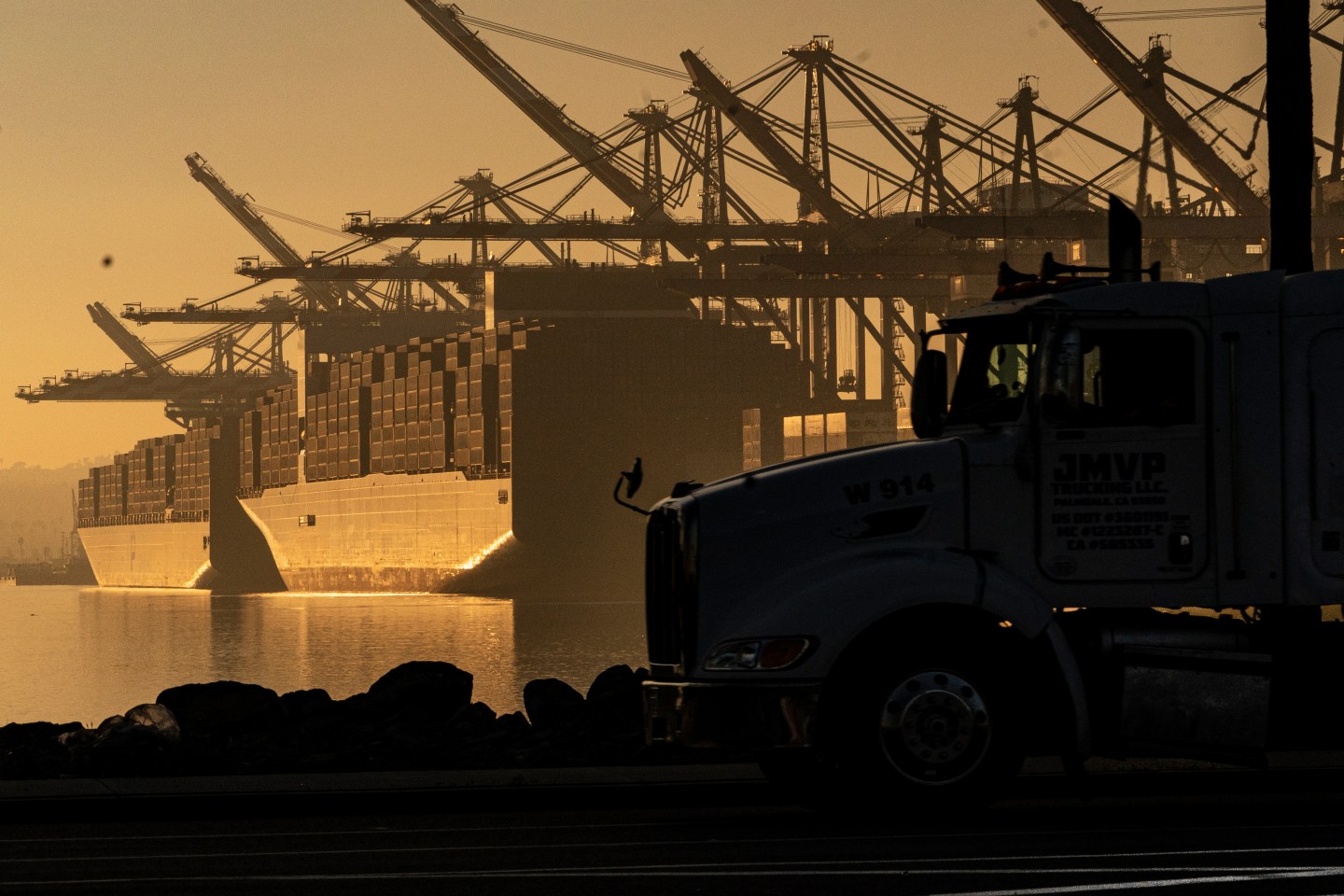 A truck arrives to pick up a shipping container near vessels at the Port of Los Angeles, on Nov. 30, 2021.
Damian Dovarganes, File

A group of major U.S. businesses wants the government to hide key import data — a move trade experts say would make it more difficult for Americans to link the products they buy to labor abuse overseas.

The Commercial Customs Operations Advisory Committee is made up of executives from 20 companies, including Walmart, General Motors and Intel. The committee is authorized by U.S. Customs and Border Protection to advise on ways to streamline trade regulations.

Last week — ahead of closed-door meetings starting Monday in Washington with senior officials from CBP and other federal agencies — the executives quietly unveiled proposals they said would modernize import and export rules to keep pace with trade volumes that have nearly quintupled in the past three decades. The Associated Press obtained a copy of the proposal from a committee member.

The information is vitally important for researchers and reporters seeking to hold corporations accountable for the mistreatment of workers in their foreign supply chains.

Here’s how it works: Journalists document a situation where laborers are being forced to work and cannot leave. They then use the shipping manifests to show where the products end up, and sometimes even their brand names and whether they’re on a shelf at a local supermarket or a rack of clothes at a local mall.

The proposal, if adopted, would shroud in secrecy customs data on ocean-going freight responsible for about half of the $2.7 trillion in goods entering the U.S. every year. Rail, truck and air cargo is already shielded from public disclosure under U.S. trade law.

“This is outrageous,” said Martina Vandenberg, a human rights lawyer who has filed petitions with CBP seeking to block shipments of goods suspected of being made by forced labor.

“Every year we continue to import and sell millions of dollars in goods tainted by forced labor,” said Vandenberg, president of the Washington-based Human Trafficking Legal Center. “Corporate America should be ashamed that their answer to this abuse is to end transparency. It’s time they get on the right side of history.”

CBP said it would not comment on ideas that have not been formally submitted by its advisory committee but said that the group’s proposals are developed with input gathered in public meetings.

But one of CBP’s stated goals in creating what it has dubbed a “21st Century Customs Framework” is to boost visibility into global supply chains, support ethical sourcing practices and level the playing field for domestic U.S. manufacturers.

Reports by the AP and other media have documented how large quantities of clothing, electronics and seafood make their way onto U.S. shelves every year as a result of illegal forced labor that engages 28 million people globally, according to the International Labor Organization. Much of that investigative work — whether into clothing made by Uyghurs at internment camps in China’s Xinjiang region, cocoa harvested by children in the Ivory Coast or seafood caught by Philippine fishermen toiling in slave-like conditions — starts with shipping manifests.

“Curtailing access to this information will make it harder for the public to monitor a shipping industry that already functions largely in the shadows,” said Peter Klein, a professor at University of British Columbia, where he runs the Hi dden Costs of Global Supply Chains project, an international collaborative between researchers and journalists.

“If anything, CBP should be prioritizing more transparency, opening up records of shipments by air, road and rail as well.”

In its 34-page presentation, the business advisory panel said its goal in further restricting access to customs data is to protect confidential business information from “data breaches” that it says “have become more commonplace, severe and consequential.”

The group also wants CBP for the first time to provide importers with advance notice whenever it suspects forced labor is being used. Activists say such a move puts whistleblowers overseas at risk of retaliation.

GM declined to comment, referring all inquiries to the Customs Operations Advisory Committee. Neither Intel nor Walmart responded to AP requests for comment.

In August alone, CBP targeted shipments valued at more than $266 million for inspection due to suspected use of forced labor, including goods subject to the recently passed Uyghur Forced Labor Prevention Act. Additionally, last month the U.S. Department of Labor added 32 products — among them acai berries from Brazil, gold from Zimbabwe and tea from India — to its list of goods possibly made with child or forced labor, making them targets for future enforcement actions.

The proposal to make vessel data confidential comes as American companies are under increasing pressure from consumers to provide greater transparency regarding their sourcing practices, something reflected in the ambitious language found in many corporate social responsibility statements.

But Vandenberg said the proposed restrictions are in line with less-touted litigation and lobby efforts by major companies to water down enforcement of the U.S. ban on forced labor.

She cited a brief filed last week by the American Chamber of Commerce, the world’s largest business federation, in a case now before a federal appeals panel in Washington. At issue is whether tech companies can be held responsible for the death and injury of children in the Democratic Republic of Congo forced to mine cobalt that ends up in products sold in the U.S.

The lawsuit was brought by families of dead and maimed children against tech giants Alphabet (the parent company of Google), Apple, Dell Technologies, Microsoft and Tesla under what’s known as the U.S. Trafficking Act, which allows victims to sue ventures that benefit financially from forced labor. The case was dismissed last year after a district judge found the companies lacked sufficient ties to the tragic working conditions in the DRC.

The Chamber of Commerce, in asking the appeals panel to uphold that decision, said the serious global problem of forced labor is best addressed by private industry initiatives, Congress and the executive branch — not U.S. courts.

Such suits “often last a decade or more, imposing substantial legal and reputational costs on U.S. companies that transact business overseas,” the Chamber of Commerce wrote in a friend-of-the-court filing.

The mismatch in rules governing disclosure of trade data for different forms of transportation goes back to 1996, when lobbying by the airline industry reversed a law passed by Congress that same year that for the first time required air freight manifests be made public.

In 2017, Scottsdale, Arizona-based Import Genius — a platform used to search shipping data — was among companies that unsuccessfully sued the federal government seeking to obtain aircraft manifests.

“Suppressing information about goods coming into our country is breathtakingly stupid,” said Michael Kanko, CEO of Import Genius. “From discovering imports of human hair linked to forced labor, to understanding the flow of PPE during the pandemic, to tracking importers of tainted, deadly dog treats, public access to this data has empowered journalism and kept consumers safe. We need more transparency in trade, not less.”