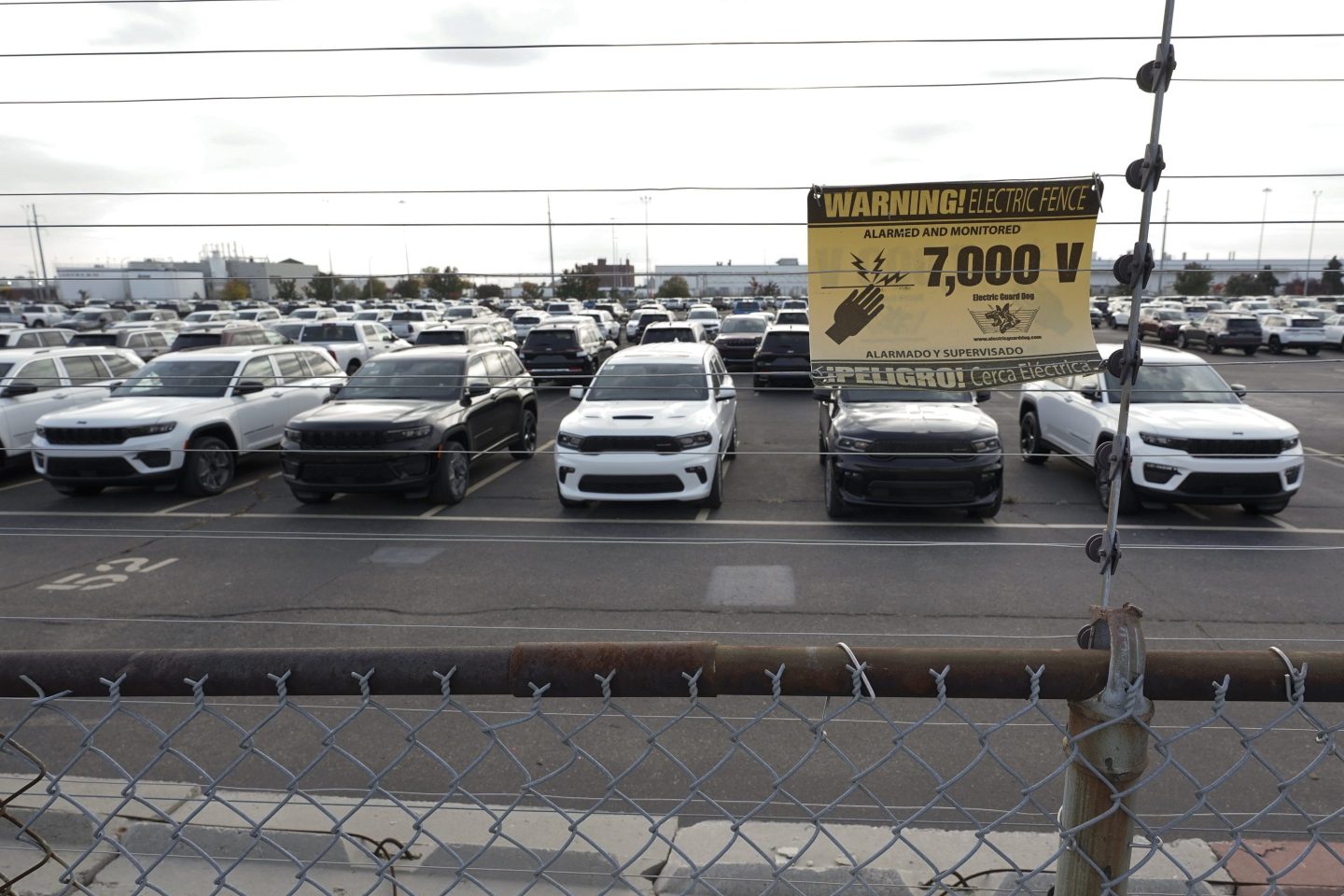 New vehicles parked in storage lots, like this one in Detroit, have been targeted by car theft rings.
Paul Sancya—AP Photo

Thieves are using cloned key fobs to steal Dodge muscle cars and other high-powered vehicles directly from dealerships and even automakers in Michigan, then selling them for tens of thousands of dollars less than their value, according to authorities and court records.

For one Ohio-based theft ring, it all came crashing down after a January holdup of a U.S. postal worker led authorities to connect several men to brazen car thefts in the Detroit area, long home to the country’s biggest automakers, including Dodge, which is now owned by international conglomerate Stellantis.

Investigators then discovered that new Chargers, Challengers, Durangos and Ram pickups worth $50,000 to $100,000 were turning up in Ohio, Indianapolis and East Cost shipping ports after being sold on the street for $3,500 to $15,000, according to a criminal complaint.

Thieves in the Detroit area are primarily going after Dodge vehicles with Hellcat engines, including Chargers and Challengers — “the fast ones,” Sgt. Jerry Hanna with the Macomb Auto Theft Squad said.

“If a patrol car gets them, they are not stopping and they’re faster than patrol cars. They’re 150 mph all day,” he said.

Instead of stealing them off the street, they’re driving them straight off dealership and assembly plant lots.

Just this year, about a half-dozen vehicles — primarily Dodge Ram TRX pickups — were taken from a lot outside an assembly plant in Macomb County.

After security measures were stepped up at some lots with Dodge vehicles, more than a dozen 2022 Ford F-150 Raptor pickup trucks were swiped from a plant lot in June in suburban Dearborn. More than a dozen Ford Mustangs were stolen in early September from the automaker’s assembly plant in Flat Rock, southeast of Detroit.

Thieves have targeted Dodges by using handheld electronic “pro pads” — a locksmith’s tool that can clone keys by plugging into interior ports in the vehicles, according to the federal complaint in the Ohio case.

Authorities weren’t looking for stolen vehicles when they stopped Devin Rice on Jan. 31 after a postal worker in Shaker Heights, outside Cleveland, was robbed at gunpoint of a mailbox key. But court records show that a search of his car and then his home turned up not just stolen mail, bogus checks, and credit and debit cards, but also a Ram pickup, a Range Rover SUV and a Dodge with a Hellcat engine — all stolen.

Rice and others were indicted in federal court in Ohio in June. Jaylen Harris, Lavelle Jones and Hakim Benjamin are charged with conspiracy and interstate transport of stolen vehicles. Rice, Harris and Jones also are charged with mail theft. Their trials are scheduled next year.

Harris told the FBI that he and Jones had been in contact through Instagram with people in the Detroit area to get stolen vehicles, according to the complaint. Harris said those thieves “were also selling to buyers in other areas, including Chicago and Indianapolis,” the complaint said.

A judge stated in a detention order that “Benjamin drove a 2022 Dodge Challenger valued at $95,000 at 120 mph down Ohio’s State Route 2 on a Sunday evening in February.”

“Spike strips were eventually needed to remind Benjamin that the law required him to comply with police orders” the judge wrote.

“These cars are going 140-150 mph. All have the Hellcat engines. We had a lot of pursuits. We did not catch them all,” he said.

Investigators learned the vehicles mostly were being stolen in the Detroit area and taken to Cleveland. Some also were destined for Memphis, Tennessee, Leist said.

“We started working with (Stellantis) in early 2022,” he said. “They would call us and tell us `We have these cars missing.’”

Added security measures at some lots have included concrete barriers, according to law enforcement.

Then last fall, a dealership’s showroom northwest of Detroit was broken into. Someone drove a Ram pickup through the building’s glass wall and “all the other cars followed suit,” said Jeff Schneider, general manager at Szott Chrysler Dodge Jeep Ram in Highland Township.

“I think they were able to find some keys in a desk drawer and used them,” he added.

Police tracked one of the stolen cars, a Durango Hellcat SRT valued at about $100,000, to a suburb northwest of Detroit. The driver had crashed into a brick wall while fleeing. A 2021 Dodge Durango GT, 2021 Dodge Ram TRX and a 2017 Dodge Charger Hellcat SRT were later recovered.

Authorities arrested four people. They were not believed to have stolen the vehicles, but to have paid $5,000 for one.

“In the Detroit area they are selling them for like $3,500,” Hanna said. “Once they get that money in their pockets they go out and steal another one.”

For dealerships and their insurance companies, the cost is high. Even recovered vehicles can’t be sold for what they were once worth.

Schneider said his dealership came up with an “old school” solution: parking boots.

“It’s a deterrent that works amazingly,” he said. “We put boots on all the Hellcats.”