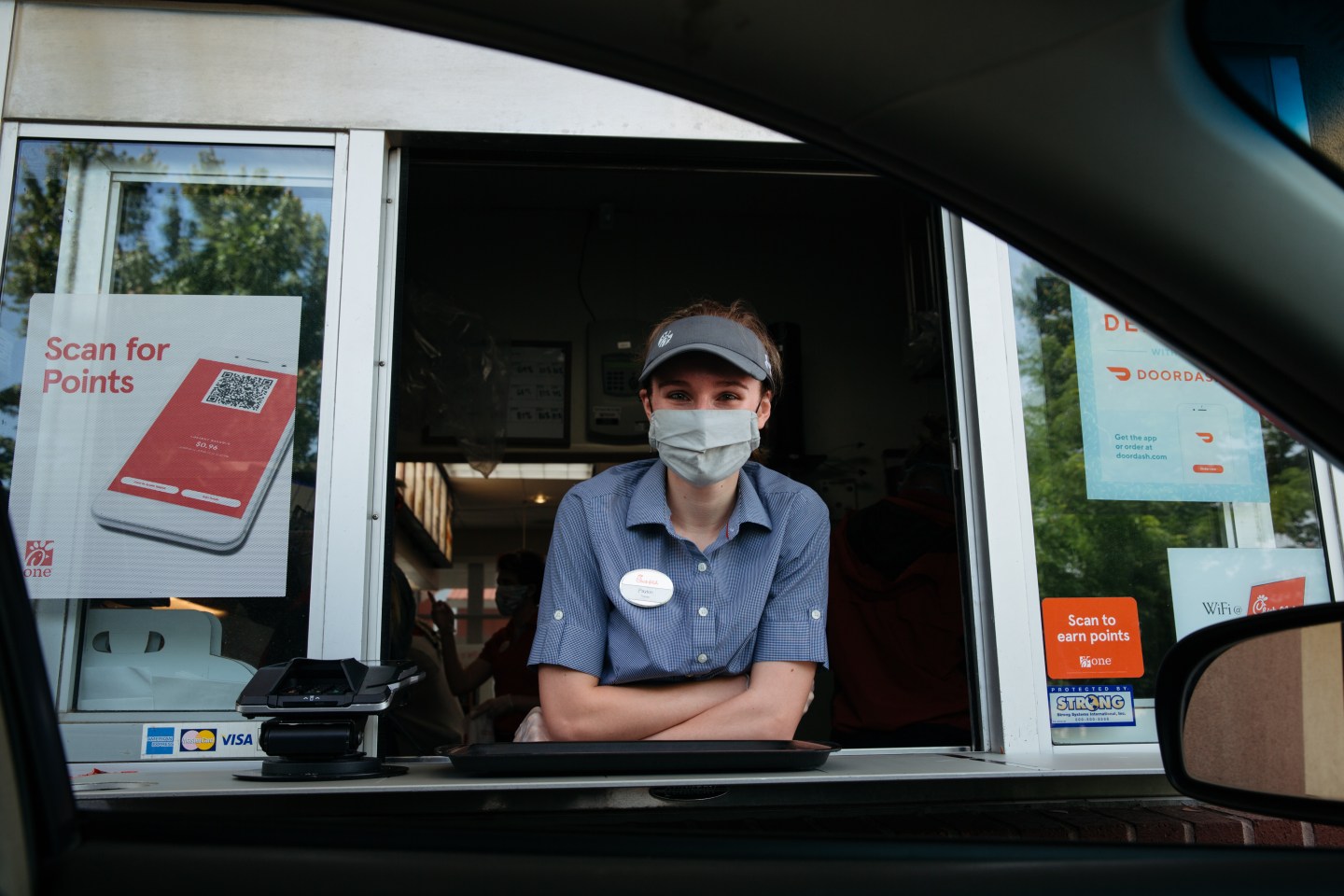 A Chick-fil-A drive-thru employee at a restaurant in Bentonville, Ark., pictured in May 2020.
Terra Fondriest—Bloomberg/Getty Images

Chick-fil-A is leaving customers more satisfied than many of its major rivals when it comes to drive-thru services, according to new research.

In the latest installation of its annual drive-thru study, Intouch Insight analyzed feedback from 1,537 Drive-thru experiences, with participants visiting 10 major fast-food outlets across the U.S. between June and July this year.

Speed, friendliness of staff, and whether or not orders were correct all played a part in the overall happiness of customers as they drove away with their food.

Wendy’s had the second longest total time spent in the drive-thru, with customers saying their experience took more than seven minutes on average.

However, Chick-fil-A was also reported to have the busiest drive-thrus, with an average 4.74 cars in line, compared to an average of less than two cars in line at Carl’s Jr., Hardee’s, and KFC outlets.

Despite Chick-fil-A customers waiting a little longer, they appeared to be the most satisfied with their food.

The chain scored highly on food quality, coming in joint first place with Taco Bell in the quality ranking of entrées being served at drive-thrus.

Top performer Chick-fil-A is an overall favorite with diners across the U.S. even outside of its drive-thru service, having been named America’s favorite restaurant for eight years running.

Getting what you order

In terms of accuracy, Arby’s and McDonald’s were tied for first place, with the two brands both having an order accuracy rate of 89%.

Burger King, Carl’s Jr., and Hardee’s followed close behind, with all three brands getting more than 85% of drive-thru orders right.

Wendy’s came in last when it came to order accuracy, with one in five orders at the fast-food chain’s drive-thrus being incorrect, according to the study. It was the only chain to score lower than 80% on accuracy.

A third of inaccurate orders across all brands occurred when the customer were given the wrong drink, while one in five involved incorrect main entrées. Fifteen percent of participants told researchers their order was fulfilled incorrectly.

Drive-thru ordering surged during the pandemic, with in-person dining banned during lockdowns. However, In Touch’s study suggested that major brands’ drive-thrus didn’t improve on accuracy during that time, with the rate of order inaccuracies remaining relatively flat since 2019.

Inaccuracies weren’t just frustrating for customers—according to the study, getting orders wrong could be costing fast-food giants millions of dollars every year.

Using the average meal cost of $9.02, In Touch calculated that inaccurate orders had a potential annual cost of $540 million per 10,000 locations.

When it came to service, Carl’s Jr. and Chick-fil-A scored the highest, with 95% of participants who visited their drive-thrus saying they were happy with their experience.

At the other end of the satisfaction scale, McDonald’s and Wendy’s recorded the lowest, recording scores of 85% and 82% respectively.

Chick-fil-A’s staff were reported to be the friendliest, with 88% of respondents who used the company’s drive-thrus saying the person who served them was friendly. When it came to dissatisfied customers, McDonald’s led the way, with 8% of its customers saying the staff were unfriendly and 61% saying they were friendly. That was on a level with Wendy’s, where just over half of customers said they were served by friendly staff and 6% actively said the employees were unfriendly.

Survey participants said they rated staff as friendly based on behaviors like eye contact, a pleasant demeanor, smiling, and saying please and thank you.

Researchers found unfriendliness of staff was also linked to speed and order accuracy, and therefore had the potential to impact companies’ bottom lines. According to the report, unfriendly workers could cost fast-food giants almost $2 billion a year per 10,000 locations.

“While it stands to logic that happier associates lead to better customer experiences, the true financial and operational impact of unfriendly service is staggering,” Laura Livers, head of strategic growth at Intouch Insight, said in a news release.

She added that companies that “crack the code” on employee satisfaction and training would offer the best diner experiences.