Ukraine is celebrating an explosion on the Kerch bridge, critical to supplying Putin’s troops 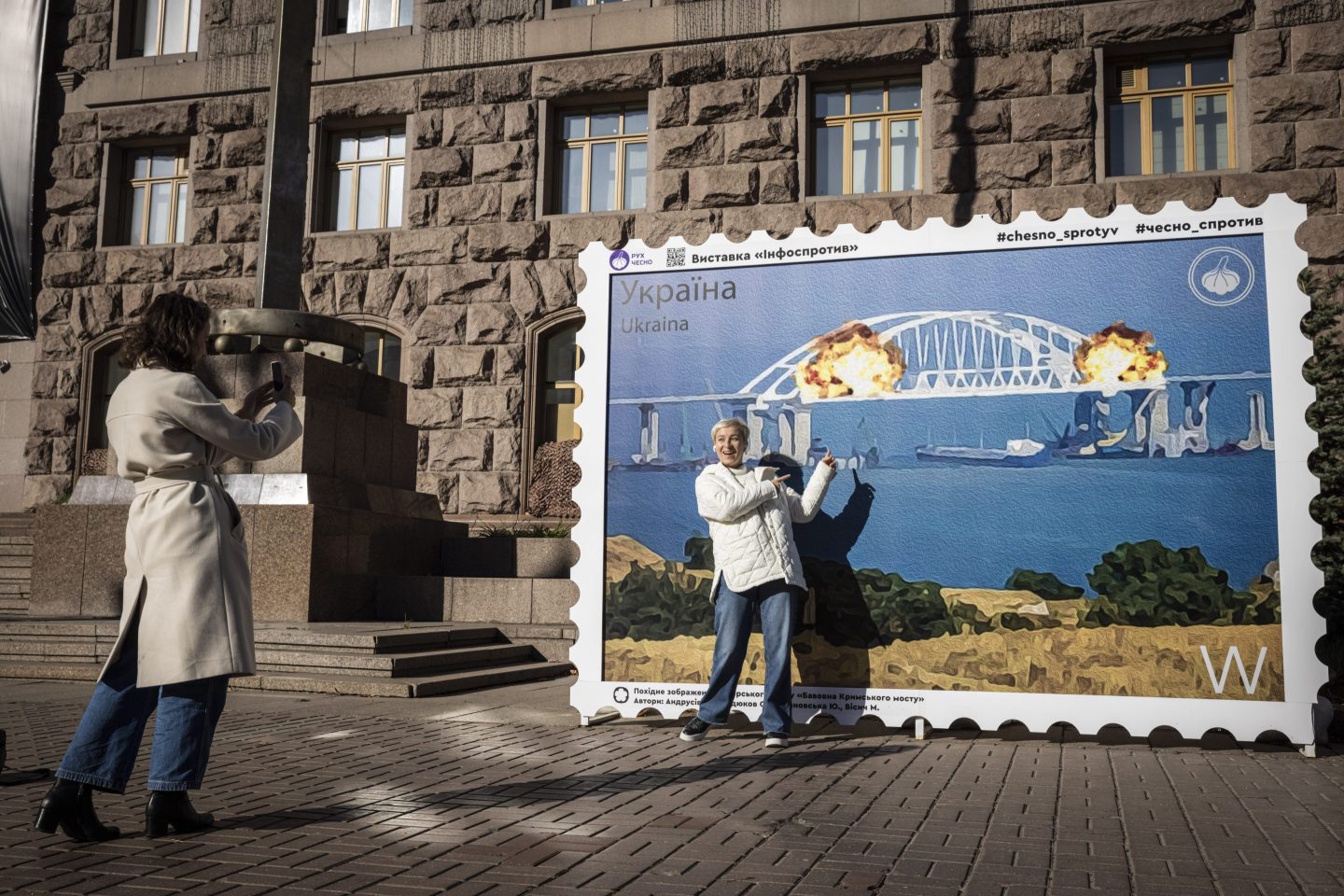 People pose in front of a picture of a postage stamp showing an artist's impression of the Kerch bridge explosion on Saturday in central Kyiv.
Ed Ram—Getty Images

President Vladimir Putin’s flagship bridge to Crimea was severely damaged in a blast that hit a fuel train and caused the partial collapse of the only road link running from the Russian mainland to the Black Sea peninsula that Moscow annexed in 2014.

Local authorities raced on Saturday to reopen one lane of the Kerch Strait Bridge to automobile traffic with full security checks, and vowed that rail services would resume.

Putin has called for a criminal investigation into the incident, and some Russian hard-liners were quick to call for Moscow to escalate its offensive in Ukraine.

A truck explosion on the span’s roadway caused seven fuel tanks on a freight train to ignite as it crossed the span early Saturday, Russia’s National Antiterrorism Committee said, according to the state-run Tass news service. Two sections of the road bridge fell into the waters below. Three deaths were reported.

Smoke billows from the Kerch bridge after a truck exploded on it early Saturday.
AFP/Getty Images

Russian officials were quick to blame Ukraine; there’s been no official claim of responsibility so far, but Ukraine’s national postal service quickly announced a new stamp to commemorate the bridge explosion. The registered owner of the truck was said to be from the Krasnodar, Russia, region, and his residence was being searched on Saturday.

Video of the scene showed the train on fire and a section of the road bridge collapsed into the sea. Surveillance footage showed the moment of impact, with some vehicles apparently caught in the blast.

Retired Australian army general and military strategist Mick Ryan said reinforced concrete bridges like the Kerch are the hardest to damage. It would “take a lot of ‘bang’ (explosives) and a good demolition design,” he said on Twitter.

Putin ordered the bridge built after annexing Crimea from Ukraine, calling the link to Russia a “historical mission” when construction began in 2016. The blast took place a day after the Russian leader’s 70th birthday, with Moscow’s forces in retreat across parts of southern Ukraine in the eighth month of his invasion.

Hours after the explosion, Russia’s defense ministry named a new commander for all its forces in Ukraine, General Sergey Surovikin, who until now had led the troops’ Southern branch.

Putin opened the 19-kilometer (12 mile) bridge in 2018 by driving a Kamaz truck at the head of a column of vehicles along it. Construction costs were about $3.7 billion.

Local Russian officials in Crimea quickly pointed the finger at Ukraine, following a series of unexplained blasts in recent weeks at military installations on the peninsula. The bridge is critical for the Kremlin to resupply its forces in Crimea and in the southern Kherson region of Ukraine, where Russian troops are facing a Ukrainian counteroffensive.

Mykhailo Podolyak, a senior adviser to Ukrainian President Volodymyr Zelenskiy called the damage to the bridge “the beginning,” without indicating involvement from Kyiv’s side. He later hinted without evidence that the operation had been part of an internal Russian power struggle.

Authorities on the peninsula are preparing to expand ferry services to Russia. Flights to and from Crimea were suspended when Putin began the war in February.

Closing all or part of the bridge “presents the Russians with a significant problem,” Ryan said. While Moscow can resupply Crimea by boat and through occupied southern Ukrainian areas, “it makes holding Melitopol even more important.”

— With assistance by Benjamin Harvey