‘Don’t let a dresser break you up’: The money talks that changed my relationship  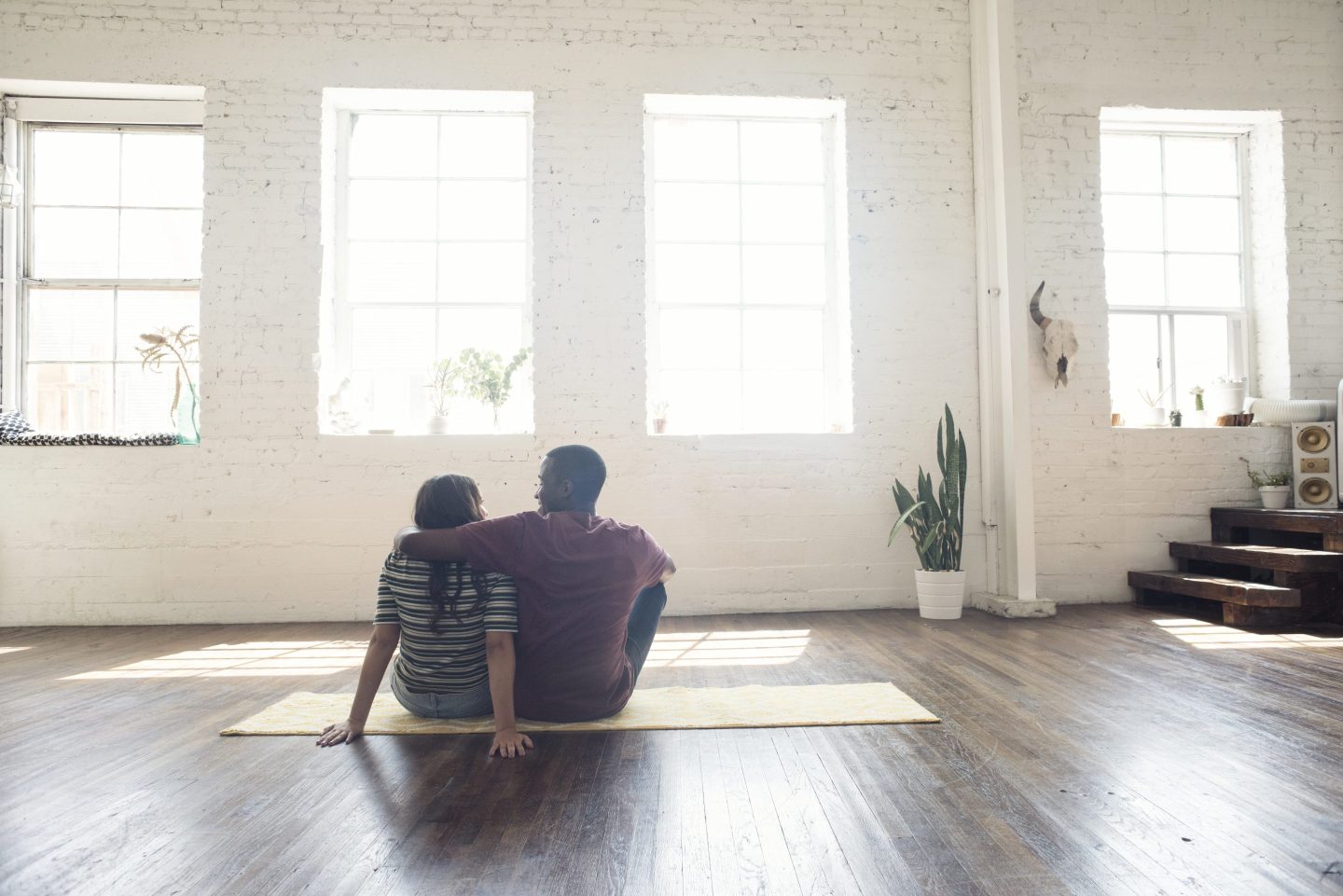 Moving in with a partner can raise more questions than just who gets the couch and who's paying what bills.
Westend61—Getty Images

My partner and I recently moved in together, and all I can think, while we’re making dinner or cuddled up watching Bridget Jones’s Diary is: Who gets the couch?

Earlier this year, Grace and I not only made the rent-saving and next-stage-in-the-relationship decision to live together, but we also packed up and moved to New York from Kansas City all in one fell swoop. It went horribly.

The Uhaul, filled with the collective belongings of the separate apartments we planned to meld into one, was stolen before we could even get it on the interstate. In addition to the clothes and keepsakes, gone was the cream-colored faux-suede couch I’d brought into the relationship.

So we bought a new couch—and a whole lot of other stuff—using money we received from a GoFundMe. The new couch is a $1,000, olive green, velvet, midcentury-modern, 84-inch sofa to replace the couch I previously owned. I love it. And since we bought, I’ve been plagued with one worry: Who gets this sofa if we split?

Neither Grace nor I has ever lived with a significant other before—and so the couch and who owns it was our first uncomfortably sticky conversation about money, what we value, and how our lives were financially being intertwined probably before we were ready.

I didn’t want to say the wrong thing, so I reached out to an expert. Turns out, it’s important to engage in frank conversations when you’re combining your life with someone else about what each person is bringing to the table. But Farnoosh Torabi, the author, journalist, and personal finance expert, who gave me this pep talk, wasn’t speaking solely of the tangible things.

Living with someone raises questions beyond just whose couch is this and who pays what bills: Do you clean? Keep on top of the shared social calendar? Make sure certain staples are stocked? Provide support in other areas when it’s needed? These are necessary conversations about what value each person is providing in not just a relationship but a shared household, Torabi says.

And then there are the possibly even tougher conversations about all the financial and emotional baggage you might be bringing along. Unfortunately, that wasn’t stolen along with our queen bed and bath towels.

After such a traumatic start to our cohabitation experience, it felt like our relationship was speeding up much faster than anticipated. I didn’t know whether we were ready to have these conversations, or if I’d even know how.

But Torabi disagrees: Shying away from these conversations is a mistake a lot of couples make, she says, because typically they’re uncomfortable and can potentially lead to conflict.

“There are so many reasons why money conversations might come up, but fundamentally the bigger question is, where do each of us source a lot of our value,” she says. “Money is just one way of providing.” These conversations are “more about addressing the emotional principles before addressing the financial.”

So, sure, let’s dive into that. Money is one of the biggest issues that create conflict in relationships. We aren’t taught how to have these conversations.

“How did you grow up with money? What is the value that has? These are conversations that you should be having,” Torabi says. “Some people think it’s flat-out rude to talk about money… Not talking about money is a big problem, and especially not talking about your views around money.”

My family was middle-class, and while I never knew how much my parents brought home every other week, I knew there were times we had plenty of money, and times we had very little. This gave me an attitude that money comes and goes, so be responsible, but buy the thing, take the trip, indulge when you have the means.

While we both recognized the value of investing in nice things, like a comfortable couch that also makes people gush when they visit, Grace gets anxious when spending a lot of money. Though our financial backgrounds aren’t too different, her attitude is more: Don’t spend, buy the less expensive thing, hold on to money.

Our clashing points of view caused a bit of tension, especially since we were scrambling to replace everything we owned: buying a new couch, bed frame, mattress, table, chairs, rugs, art, appliances, everything. We were spending a lot of money in a short period of time, forcing us into conversations and negotiations we’d never had before. It certainly wasn’t the most comfortable conversation, but it was no politics at Thanksgiving dinner either.

It’s typical, Torabi says, for one person in a relationship to be more frugal than the other. There’s probably something about opposites attracting and all that.

“Some stuff like furniture is going to require negotiations, but I don’t think it’s constantly going to be a negotiation,” she says. “When negotiating with someone who’s maybe afraid of spending money, as the partner who wants to be persuasive, you want to break it down in their language.”

As far as $1,000 purchases go, it was pretty easy to buy the couch. And the bed frame. And the table and chairs. All we had left to buy was a dresser, when we finally hit a wall. Our clothes sat folded (not entirely neatly) on closet shelves and the bedroom floor for longer than I’d care to admit. Grace wanted to buy an inexpensive dresser whose sole purpose was simply to hold our clothes. I wanted something beautiful—a dresser that would far outlast whatever utilitarian Ikea model we could get for much cheaper. After a month of going back and forth, we bought a ’60s-era vintage dresser for $1,300. Hopefully it’s the last dresser we’ll ever need to buy for our room. Grace agreed it was the right decision. And, as Torabi reminds me, we can negotiate on other areas where we can save money to offset this big expense.

“Recently my thing has been saying, ultimately there is no perfect way to go about it,” Torabi says. But if you aren’t communicating about money and learning as much as you can about each other’s relationship to it, then something should probably change.

“It can go wrong when you make a lot of assumptions about where someone is coming from financially,” Torabi says. “The dresser is really symbolic of, here’s a couple who has differing ideas of what to get from their money… I don’t think there’s anything wrong with over communicating when you’re talking about something you’re both going to use.”

Still, Torabi reminds me to keep it all in perspective: “Don’t let a dresser break you up.”

We haven’t decided who gets the couch, or the bed, dining table, chairs, or dresser if we ever split. But I’ve come realize that’s not what’s most important here. What’s more valuable is that Grace and I proved we’re able to talk about our many money concerns, fears, the stickiness of navigating this new living arrangement, which has opened the door to normalizing that communication in our relationship.

Now if we could just find a way to negotiate who’s in charge of emptying the litter box.