Liz Truss stands by U.K. tax cuts plan but wishes she had ‘laid the ground better’ after market chaos 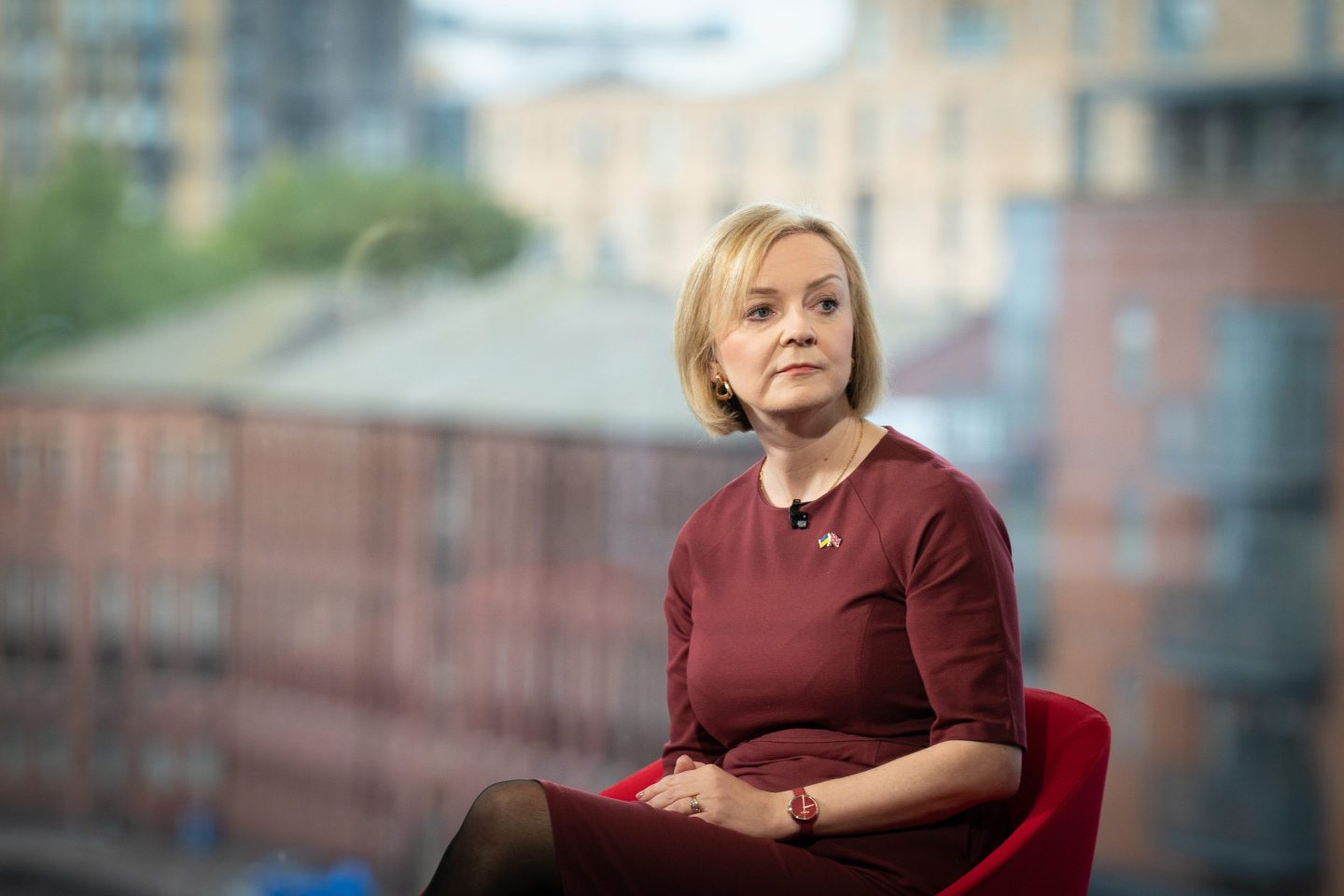 U.K. Prime Minister Liz Truss confessing to mistakes but standing by her mini-budget on the BBC on Sunday.
Stefan Rousseau—PA Images via Getty Images

Liz Truss said the controversial decision to remove the highest rate of UK income tax was taken by Chancellor of the Exchequer Kwasi Kwarteng and that her government is sticking with it despite market chaos.

Her defiance — as the ruling Conservative Party’s annual conference begins in Birmingham on Sunday — will further fuel anger among Tory MPs about her leadership and the economic policy she and Kwarteng are pursuing.

Former Cabinet Minister Michael Gove made clear he would not support the move to benefit the highest earners in Britain when the question is eventually put to Parliament. His views echo the criticism of many other Tory MPs who say the plan plays directly into the hands of the Labour Party, currently leading opinion polls by a huge margin.

But Truss made clear she is not backing down, and Conservative Party Chairman Jake Berry told Sky News that any Tory MP who voted against the measure would be kicked out of the parliamentary party.

The row has left Truss, who should have been enjoying a celebration of her leadership victory less than a month ago, facing a battle to regain authority within her party. Just weeks after they ousted her predecessor Boris Johnson, some MPs are already considering how they can do the same to her.

In a BBC interview, Truss said her government should have “laid the ground better” for Kwarteng’s mini-budget announcement, but insisted: “I do stand by the package we announced.”

Yet her comment that it was Kwarteng who decided to remove the highest income tax band — and that he did so without putting such a politically sensitive issue to Cabinet — will raise eyebrows. By sticking with the plan, though, it appears unlikely Truss is considering cutting Kwarteng loose.

Traders drove to the pound to a record low in the aftermath of Kwarteng’s fiscal statement, government borrowing costs soared and the Bank of England to intervene to prevent a meltdown in the gilt market.

Amid the fallout, support for the Tories has tanked, with YouGov putting the opposition Labour Party 33 points ahead. A survey by Opinium for the Observer newspaper showed three-quarters of UK voters, including 71% of those who backed the Tories in the last election, believe Truss and Kwarteng have “lost control” of the economy.

Cutting taxes for Britain’s highest earners is proving especially toxic among Tory MPs, who fear the accompanying government cost savings Truss and her ministers say are needed will play into the hands of Keir Starmer’s Labour.

Public services are still trimmed back since the global financial crisis, and National Health Service waiting times have soared after the pandemic. That makes any hint of austerity politically unpopular, particularly so if the perception is that cuts are being made to fund a tax cut for the wealthy.

That argument will be intensified by a report in the Sunday Times newspaper that Kwarteng went to a party with hedge fund managers the evening after his tax-cutting statement in the House of Commons.

Asked by the BBC if that sent the wrong message at a time when the government is looking for budget savings, Truss said it is the chancellor’s job to meet business people, before adding: “I do not manage Kwasi Kwarteng’s diary, believe me.”

Still, it is the economic vision of Truss and Kwarteng that runs to the heart of the tensions in the Tory party. They are viewed as a political double-act and have spent years calling for deregulation, low taxes and free markets. They are now putting that into practice.

The fear many Tory MPs have is that now is not the time, with Britons already facing a dramatic squeeze on living standards, exacerbated now by the fact that many banks have pulled mortgage products because the market jitters have made pricing too difficult.

Labour’s economy spokeswoman, Rachel Reeves, said many people will not be able to cope with mortgage rate increases as a result of the government’s policies. “This is a crisis made in Downing Street but it’s ordinary working people who are paying the price,” she told the BBC.

On Sunday, Truss said she would ensure state pension payments rise in line with inflation, but refused to make the same commitment for welfare benefits and department spending.

“I believe in getting value for money for the taxpayer,” Truss said.

But the return of austerity is a frightening prospect for struggling Britons, and the political fallout is compounded by the fact that Truss is not a natural, empathetic communicator.

She also starts from a position of weakness in the party: Two-thirds of her MPs voted against her in the contest to replace Johnson in July, and she only claimed victory because she was the preferred choice of grassroots members.

“There is inadequate realization at the top of government at the scale of change that is required,” Gove told the BBC after Truss’s interview.