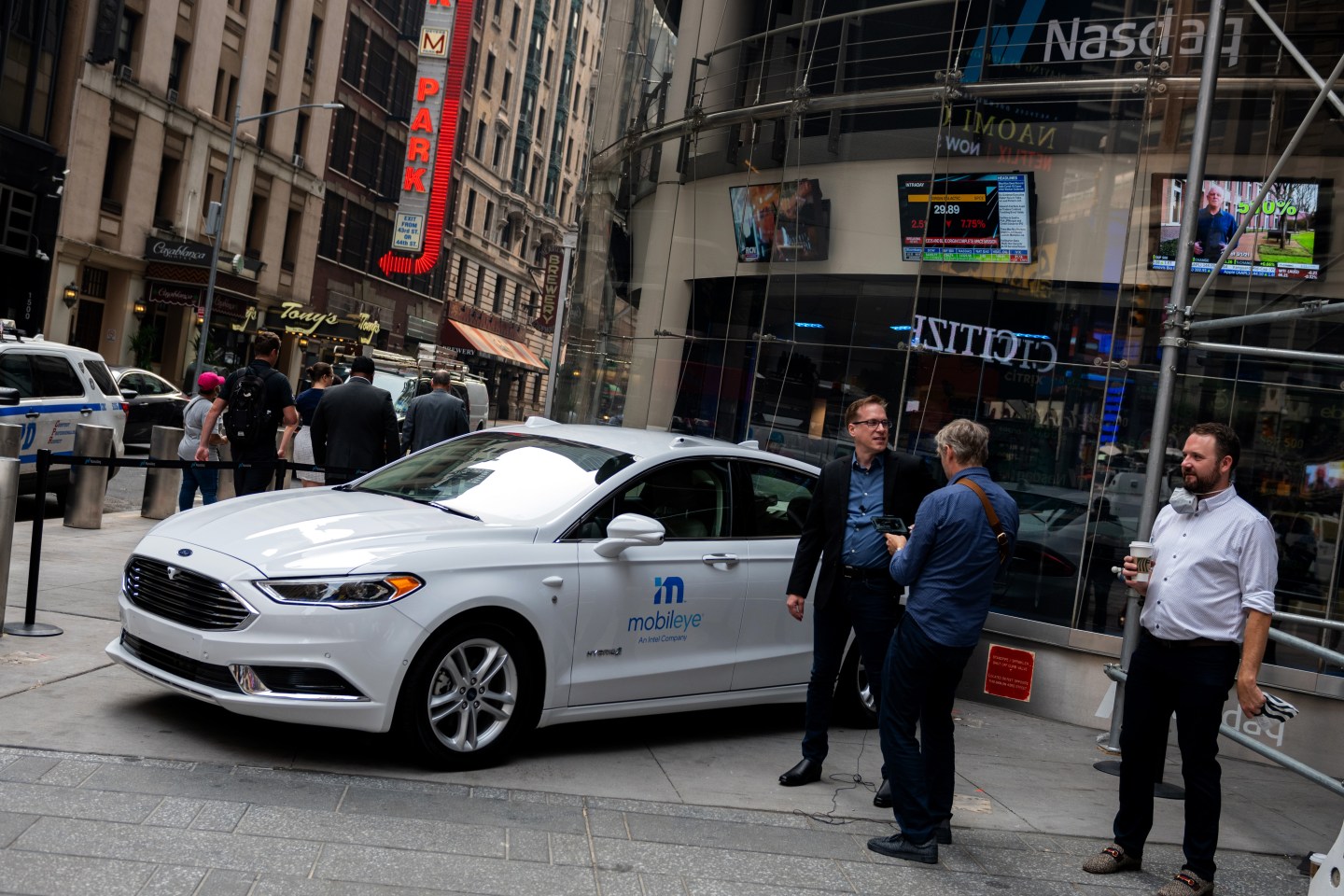 A Mobileye vehicle is parked outside Nasdaq in Times Square on July 20, 2021 in New York City.
Alexi Rosenfeld—Getty Images

Intel has filed for an initial public offering of its self-driving technology business, Mobileye Global Inc., braving the worst market for new US listings since the financial crisis more than a decade ago.

The company didn’t disclose terms of the planned share sale in its filing Friday with the US Securities and Exchange Commission. Mobileye will continue to be controlled by Intel after the IPO, according to the filing.

Intel expects the IPO to value Mobileye at as much as $30 billion, less than originally hoped, Bloomberg News reported this month.

If the listing goes ahead this year, it would be one of the biggest US offerings of 2022. Currently, only two companies have raised $1 billion or more on New York exchanges since Jan. 1, compared with 45 in 2021. This year, the US share of IPOs has shrunk to less then a seventh of the global total from half in 2021.

Mobileye would also be following in the tracks of Porsche AG’s market-defying IPO in Frankfurt this week. That €9.4 billion ($9.2 billion) listing is the world’s second biggest this year and the largest since stock markets began their volatility- and inflation-driven downward spiral in January.

Intel Chief Executive Officer Pat Gelsinger is trying to capitalize on Jerusalem-based Mobileye, acquired in 2017 for $15 billion, with a partial spinoff of its shares. Mobileye makes chips for cameras and drive-assistance features, and is seen as a prized asset as the car industry races toward fully automated vehicles.

Now with about 3,100 employees, Mobileye has collected data from 8.6 billion miles on the road from eight testing sites globally, according to its filing. the company says its technology leads in the race to shift the automotive industry away from human drivers. It’s shipped 117 million units of its EyeQ product.

Mobileye has been a particularly bright spot for Intel and has consistently grown faster than its parent. As of July, it had $774 million of cash and cash equivalents. In the 12 months ended Dec. 25, it had a net loss of $75 million on revenue of $1.39 billion.

The company said it plans to use proceeds from the IPO to pay down debt and for working capital and general corporate purposes.

Mobileye said in its filing that its board will include Gelsinger as chairman, and also former US Senator Claire McCaskill, a Missouri Democrat, and Jon Huntsman, the former Republican governor of Utah as well as ambassador to China who is now on Ford Motor Co.’s board.

In its filing, Mobileye noted that it acquired mobility and transportation business Moovit from Intel this year. Moovit, another Israeli-based business, had been acquired by Intel for $900 million in 2020.

A successful Mobileye listing could break the ice for an array of startups that have been waiting for the year’s market tumult to ease before moving ahead with IPOs.

More specifically, it could clear a growing logjam of chip-related assets waiting to come to market. SoftBank Group Corp. also is trying to sell shares of semiconductor designer Arm Ltd. by early next year. Ampere Computing LLC, a startup making processors for data centers, is planning an IPO as well.

The Mobileye offering is being led by Goldman Sachs Group Inc. and Morgan Stanley. Mobileye plans for its shares to trade on Nasdaq under the symbol MBLY.