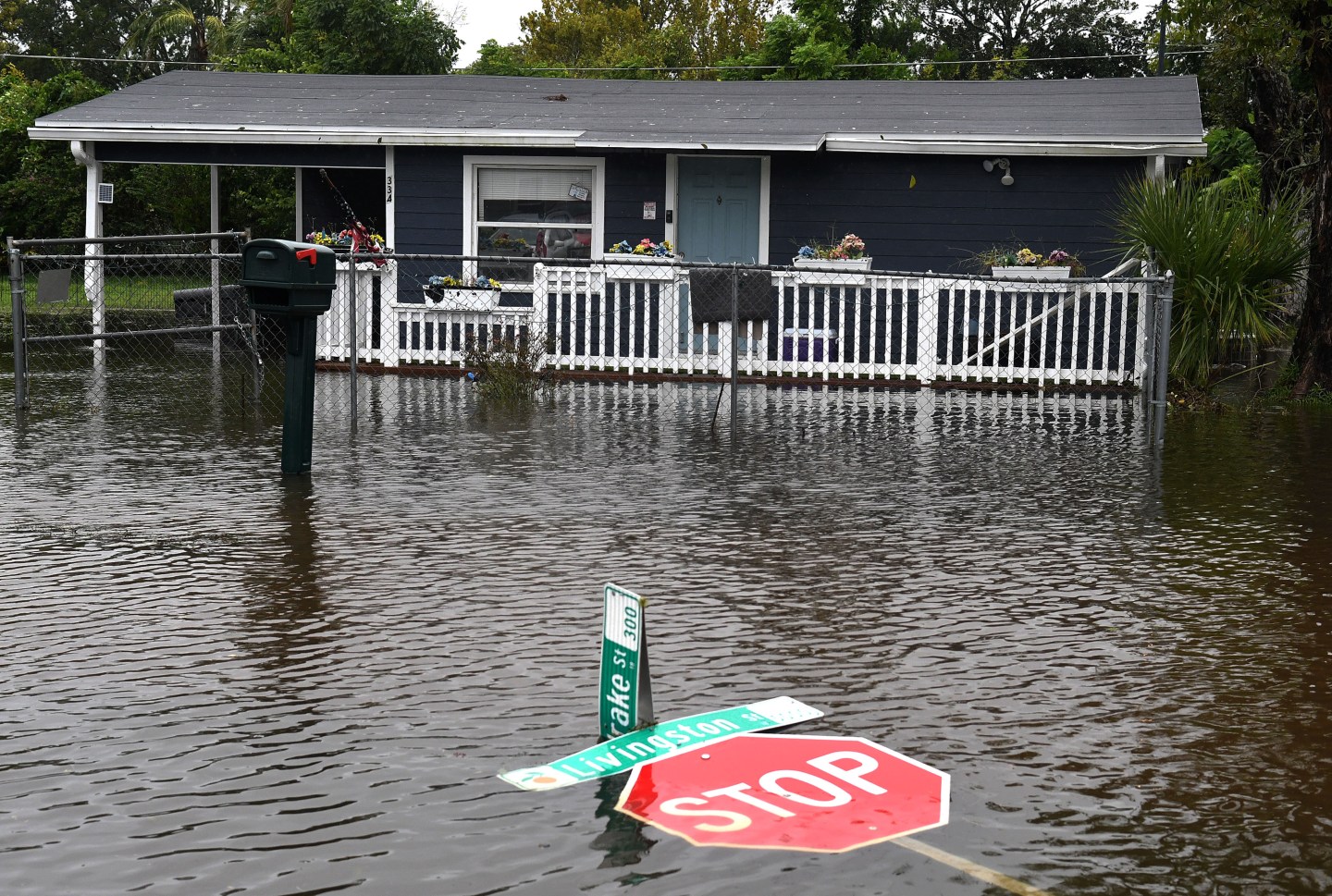 Street signs are seen in the water in a flooded street in the aftermath of Hurricane Ian on September 29, 2022 in Orlando.
Paul Hennessy—Anadolu Agency/Getty Images

Photos and videos of sharks and other marine life swimming in suburban floodwaters make for popular hoaxes during massive storms. But a cellphone video filmed during Hurricane Ian’s assault on southwest Florida isn’t just another fish story.

The eye-popping video, which showed a large, dark fish with sharp dorsal fins thrashing around an inundated Fort Myers backyard, racked up more than 12 million views on Twitter within a day, as users responded with disbelief and comparisons to the “Sharknado” film series.

Dominic Cameratta, a local real estate developer, confirmed he filmed the clip from his back patio Wednesday morning when he saw something “flopping around” in his neighbor’s flooded yard.

“I didn’t know what it was — it just looked like a fish or something,” he told The Associated Press. “I zoomed in, and all my friends are like, ‘It’s like a shark, man!’ ”

He guessed the fish was about 4 feet in length.

Experts were of mixed opinion on whether the clip showed a shark or another large fish. George Burgess, former director of the Florida Museum of Natural History’s shark program, said in an email that it “appears to be a juvenile shark,” while Dr. Neil Hammerschlag, director of the University of Miami’s shark conservation program, wrote that “it’s pretty hard to tell.”

The surge worsened in Fort Myers as the day went on. Cameratta said the flooding had only just begun when the clip was taken, but that the waters were “all the way up to our house” by the time the AP reached him by phone Wednesday evening.

He said the fish may have made its way up from nearby Hendry Creek into a retention pond, which then overflowed, spilling the creature into his neighbor’s backyard. A visual analysis of nearby property confirmed it matches the physical landmarks in the video.

Leslie Guelcher, a professor of intelligence studies at Mercyhurst University in Erie, Pennsylvania, was among the online sleuths who initially thought the video was fake.

“Don’t think this is real. According to the index on the video it was created in June 2010. Someone else posted it at 10 AM as in Fort Myers, but the storm surge wasn’t like that at 10 AM,” she tweeted Wednesday.

Guelcher acknowledged later, though, that online tools she and others were using to establish the video’s origins didn’t actually show when the video itself was created, merely when the social media profile of the user was created.

The AP confirmed through the original clip’s metadata that it was captured Wednesday morning.

“It makes a bit more sense from a flooding standpoint,” she said by email, when informed the fish was spotted near an overflowing pond. “But how on earth would a shark go from the Gulf of Mexico to a retention pond?”

Yannis Papastamatiou, a marine biologist who studies shark behavior at Florida International University, said that most sharks flee shallow bays ahead of hurricanes, possibly tipped off to their arrival by a change in barometric pressure. A shark could have accidentally swum up into the creek, he said, or been washed into it.

“Young bull sharks are common inhabitants of low salinity waters — rivers, estuaries, subtropical embayments — and often appear in similar videos in FL water bodies connected to the sea such as coastal canals and ponds,” Burgess said. “Assuming the location and date attributes are correct, it is likely this shark was swept shoreward with the rising seas.”

Cameratta sent the video to a group chat on WhatsApp on Wednesday morning, according to his friend John Paul Murray, who sent the AP a timestamped screenshot.