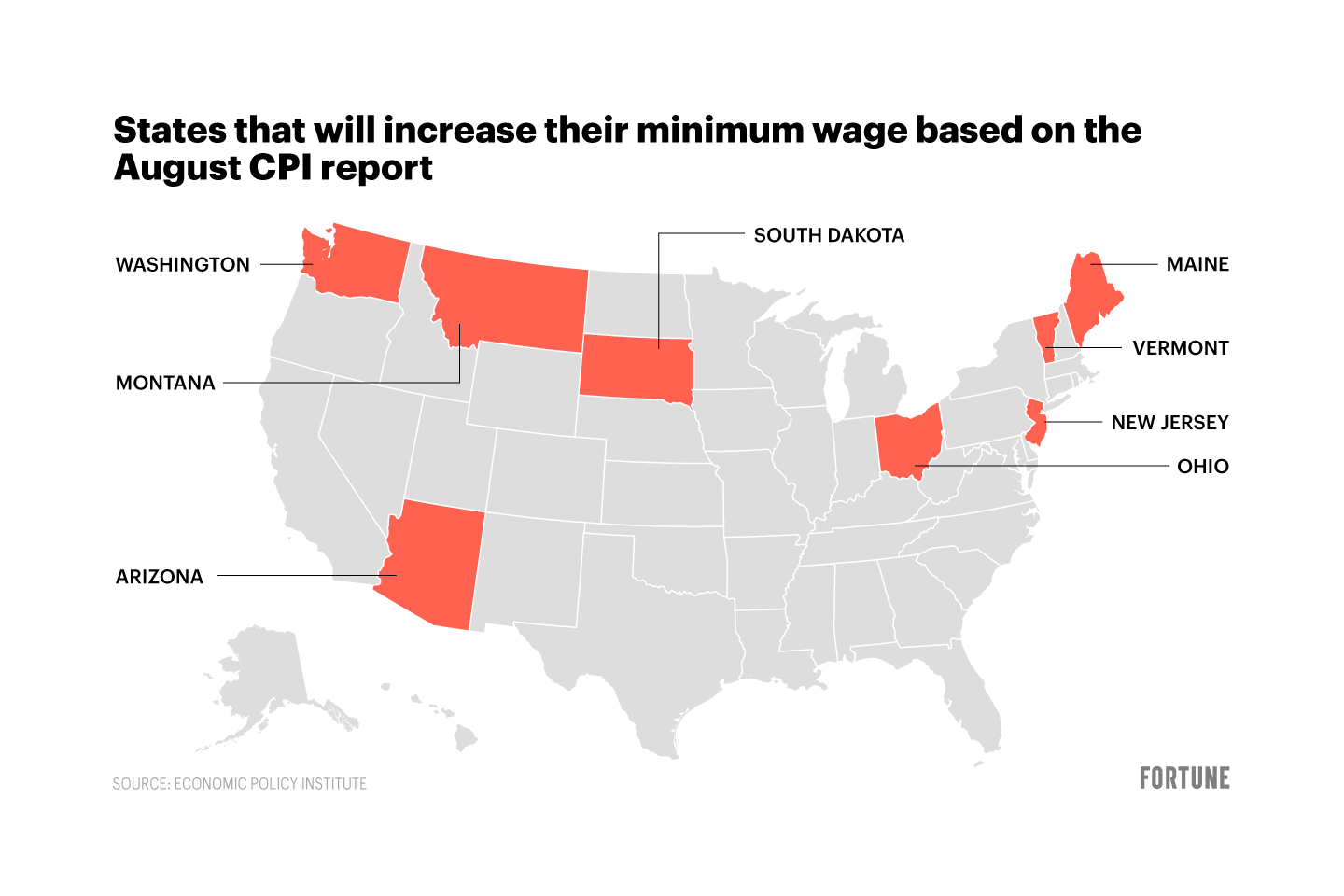 Workers who earn minimum wage in eight states will soon receive raises based on the latest consumer price report that showed an 8.3% jump in inflation.

Minimum wages in Arizona, Maine, Montana, Ohio, South Dakota, Vermont, Washington, and New Jersey are pegged each year to the annual August consumer price data, released on Tuesday, and will therefore rise in tandem next year—at least, most of them.

Vermont has a slightly different procedure for calculating its minimum wage hikes: It caps the annual increase to 5%. Additionally, some states round the adjustments they make to the nearest five cents.

This year, inflation has hit a four-decade high, driven by lasting supply-chain shocks as a result of the pandemic and skyrocketing food and energy prices because of the war in Ukraine. The higher prices have sent shock waves across the economy and eroded the real value of savings and worker pay.

Instead of relying on the Consumer Price Index (CPI), Minnesota pegs its minimum wage to changes in the Personal Consumption Expenditures Price Index (PCE), which is expected to be released at the end of this month. PCE measures the change in goods and services consumed, as opposed to the CPI, which measures the change in out-of-pocket expenditures.

The District of Columbia and a handful of additional states including Alaska, Colorado, New York, and Oregon also peg their minimum wages to inflation, but base them on other measurements. For example, Oregon pegs its minimum wage to the March-to-March change in the CPI. New York’s annual indexing is determined year to year in a decision made by the Director of the Division of Budget.

“This is what indexing the minimum wage does: It means that the lowest-wage workers don’t have to wait for a legislature to get its act together and raise the minimum wage for them to keep up,” he said. “Prices are up this year, considerably higher than what we’ve been used to for a long time, and low-wage workers are going to suffer from that more than anyone else.”

Kamper said the other five states, and D.C., that don’t use August’s CPI report will still see an increase in minimum wage but at various times throughout the year. He added that more states are likely to begin indexing their minimum wage based on inflation because wages are growing slower than prices.

“What we’re seeing here is that as prices go up, worker wages are falling behind,” he said.

Nonetheless, Kamper thinks it should be a federal policy that the federal minimum wage be tied to inflation. It allows for predictability and stability for workers, and it gives them the ability to keep up with inflation as the costs of goods soar, he said.

“Indexing the minimum wage means the state’s minimum wage is protected from prevailing changes in the political winds,” Kamper added.

Correction: An earlier version of this article did not include New Jersey as one of eight states raising their minimum wage based on August’s CPI report.

Correction, Sept. 16, 2022: An earlier version of this article did not include New Jersey as one of eight states raising their minimum wage based on August’s CPI report.