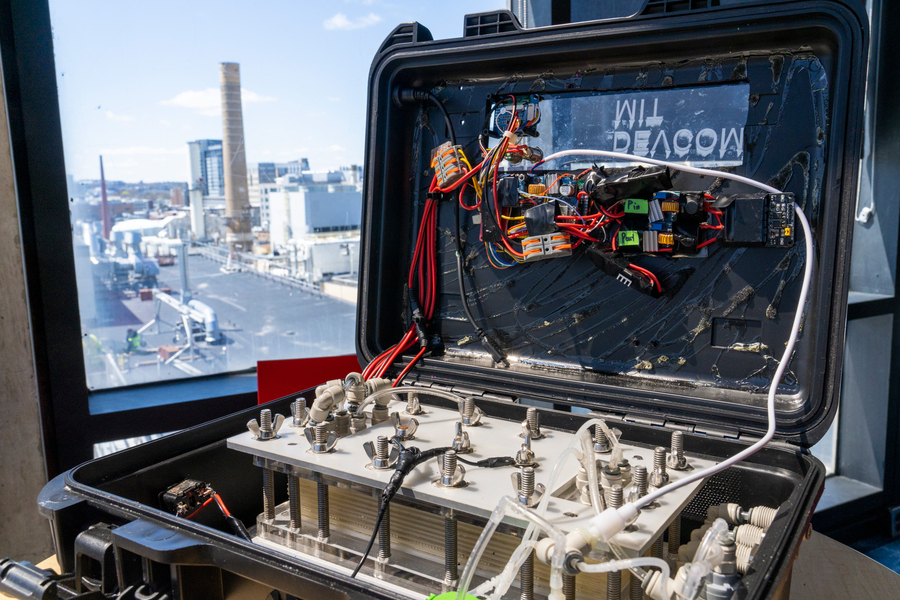 Junghyo Yoon and a team of scientists from MIT’s Research Laboratory for Electronics had spent years building a portable desalinator the size of a briefcase that would turn seawater into water safe enough to drink. They knew it worked, but the real test of the technology came on Boston’s Carson Beach in early 2021. Yoon held a glass of seawater that had just run through the desalinator. “Just drink it!” he says, pumping himself up in a video of the moment. He tips his head back, sips the water, and gives the camera a thumbs-up.

“We joke that Junghyo tasting the water in that video was a bit like Norman Osborne testing the strength-enhancing formula on himself in Spider-Man,” says Bruce Crawford, the CEO of Nona Technologies, the Cambridge, Mass.-based startup he and Yoon founded this year to commercialize the desalinator. In May, Nona won the 2022 MIT $100K Entrepreneurship Competition, a 32-year-old contest that has recognized future public companies such as Akamai and HubSpot.

Large-scale modern desalination has been around for some 60 years, and huge factory-size plants are turning seawater into drinking water, from California (where there are a dozen desalination facilities) to Spain (where a Barcelona plant, Europe’s largest, supplies 20% of the metro drinking water) to the Middle East (where Saudi Arabia produces a fifth of the world’s desalinated water).

Industrial-size plants can pump out massive amounts of clean water to urban and farming areas at reasonable efficiency and cost. Yoon and Crawford founded Nona to translate that technology to a smaller scale: to provide portable, reliable, cheap drinking water to the isolated communities, refugees, and victims of natural disasters who desperately need it. Today, one in 10 people globally—785 million—do not have access to basic safe drinking water, and every two minutes a child dies from a water-related disease.

Since launching, the startup has added 400 people to its preorder waitlist and has received 150 queries from interested investors, Crawford says.

“The large-scale, plant-based water generation model is not solving all of the water challenges of the world,” says Jongyoon Han, the electrical and biological engineering professor at MIT who oversaw Yoon’s work and on whose research the Nona’s desalinator is based. “There are a lot of applications where you don’t really need that much water, but you need it at a very critical juncture, and location, and point in time—where even a very small amount of clean water would make a huge difference.”

Nona’s origins stretch back to 2008, when Han responded to a call for proposals from the U.S. military research agency DARPA. It wanted portable desalination devices for soldiers in the field.

Two processes account for nearly all desalinated water used today. In thermal desalination or distillation, water is boiled or evaporated into steam that is later condensed back into water in another location, a process that leaves behind the salt and other contaminants. In reverse osmosis, pressure filters clean water to one side of a membrane and salty brine to the other. Both processes need to be large to be energy-efficient, making them unsuitable for small-scale or portable installations.

In ED, an electrical charge applied to a water channel pulls salt’s negative (chloride) and positive (sodium) ions to opposite sides where they pass through membranes, leaving clean water behind. But ED has shortcomings: The membranes are expensive and the ones that let through the negative ions—called AEMs—are notorious for getting clogged. Plus, the process demands plenty of energy.

Conventional wisdom told Han that he needed to pull both positive ions (cations) and negative ones (anions) at the same time, using two different membranes. But after years of experiments with postdoc research scientists like Yoon, Han realized he could desalinate water by pulling only the positive ions, eliminating the need for troublesome AEMs and requiring less energy. Nature doesn’t tolerate a system that is only positively or negatively charged, so if you remove all the positive ions from an area, the negative ones will vacate the area too.

“What ends up happening is the [negative ions] are also repelled from the region,” Han explains. “So, by pumping only the [positive ions] through the membrane, you create this ion-free region near the membrane.”

“It’s a beautiful technology, because it actually repels ions away from the membrane rather than sucking it through,” says Volker Presser, a professor of materials science at Germany’s Saarland University, who describes the technology as “at least very promising.”

When Yoon began working with Han six years ago, the MIT professor had developed the technology—known as Ion Concentration Polarization (ICP)—but it was neither energy-efficient nor easily portable. Yoon dedicated himself to making it a viable commercial product by shrinking the desalinator’s size and improving its efficiency to the point that it can now run on a small off-the-shelf solar panel and fit in a suitcase. “That is my contribution,” Yoon says.

Han and Yoon launched a company, Nona, to sell the desalinator earlier this year, with Han as outside adviser and Yoon as the technology lead. Yoon brought in Crawford, who previously worked at electric carmaker Rivian, to run the business side of things. The two had lived across the hall in graduate housing at MIT, where Crawford is an MBA student, and bonded over both having 2-year-old daughters.

Today, Nona’s first desalinators can provide one liter of clean water an hour—enough for one person—and require less electricity than a cell phone charger. By late 2024, Crawford says the company should have a five-liter-per-hour model, which would be useful for a family or small military unit.

Right now, the units cost $3,000 to $4,000, Crawford says, but Nona should be able to lower the price below $1,500 in three to five years by moving away from retail-priced components bought on Amazon.

Yoon and Crawford say the market for a portable desalinator is already hot.

The military is Nona’s clearest immediate customer—the U.S. Army Combat Capabilities Development Command (DEVCOM) has provided $600,000 in funding—but interest has come from humanitarian aid agencies like UNICEF that want pickup-truck-bed-size units to supply a few hundred people; and from boaters, apocalypse preppers, and those who work with people in remote areas of countries like India and Madagascar, where the groundwater is too brackish to drink.

“Middle-income households in India are comfortable to pay $200 for a device to clean their water,” says Crawford.

Many potential investors have expressed interest in using the process at an industrial scale, but that is a market Yoon and Crawford have so far avoided.

“We can win today at small scale and in medium term we can win at medium scale—a town—but we’re far from competing at the large scale,” Crawford says.

The company plans to raise funds from investors in the spring to carry it 18 months through to commercialization, Crawford says.

In the end, Yoon hopes he won’t be the only one chugging Nona’s output. “My ultimate goal is to give the water to my daughter,” he says.