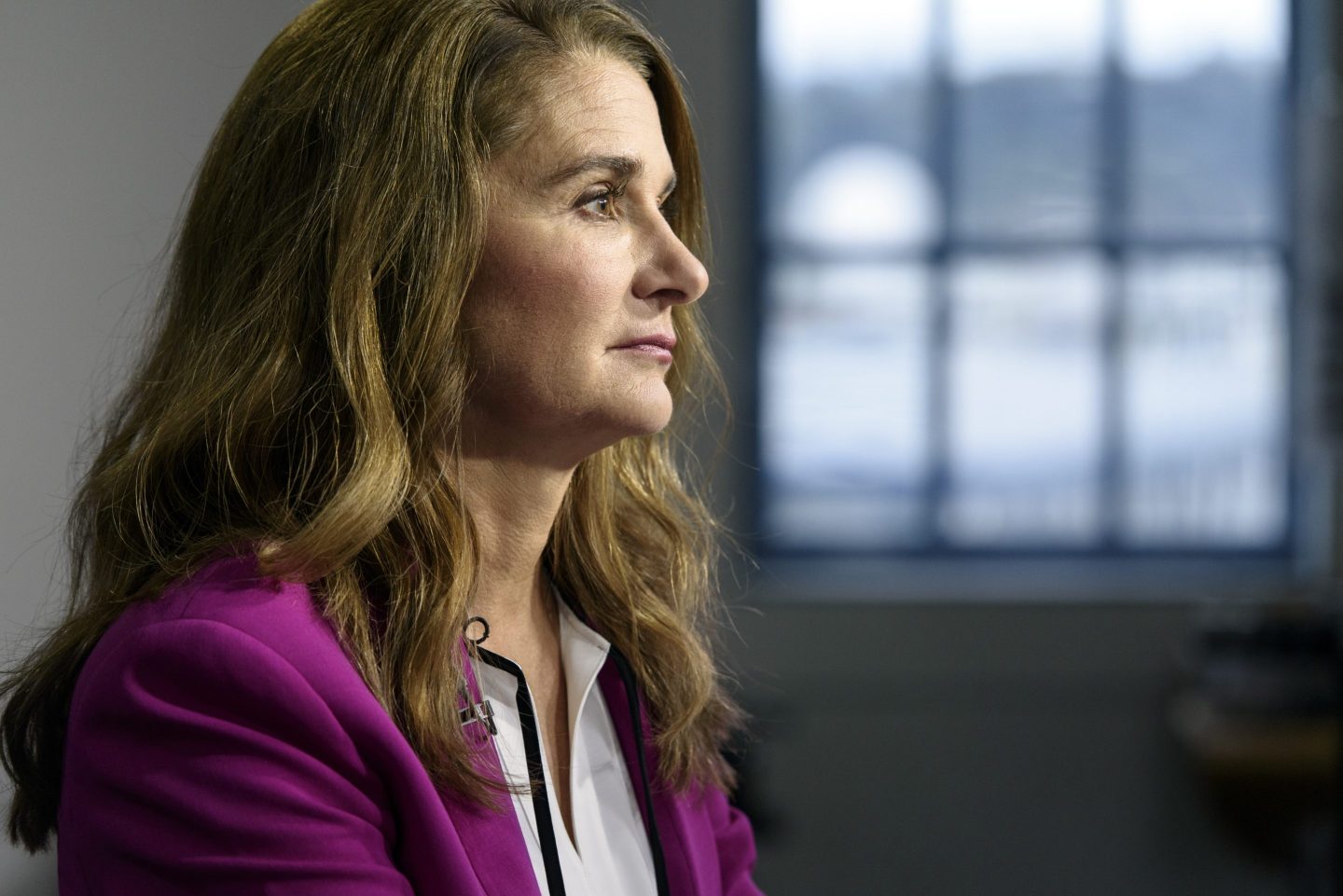 The world is expected to achieve gender equality three generations later than hoped, according to a new study by the Bill & Melinda Gates Foundation.
Michael Short—Bloomberg/Getty Images

For Melinda French Gates, hope looks like the group of female scientists leading breakthrough research in Africa by running a surveillance system to pick up diseases. Or the Senegal woman who started a business recycling tires found on the streets into synthetic turf. Or the female cofounder of a Kenyan organization who partners with women running informal day cares to make them more accessible to low-income families.

French Gates has met with all these women, she tells Fortune in an interview, and their stories are her shining beacons of light in a world where gender equality remains in the shadows.

“When I see women achieving their dreams in science, or as businesswomen, and supporting other women, that keeps me hopeful,” she says. “It helps me know we actually can make progress.”

Such optimism is needed. The UN General Assembly set a goal in 2015 to achieve global gender equality by 2030 as part of its 17 Sustainable Development Goals (SDGs)—ambitious objectives focused on “peace and prosperity.” But now at the halfway point, the world is nowhere close to accomplishing it.

So reveals the 2022 Goalkeepers Report released today by the Bill & Melinda Gates Foundation, which regularly assesses the progress the world has made toward achieving the SDGs. With insights from data partner Equal Measures 2030, the foundation estimates that gender equality won’t be a feasible reality until 2108 at the earliest—three generations later than they hoped.

Gender equality is “falling further and further out of reach,” French Gates writes in the report. She adds that development experts knew the world wasn’t on track to reach this goal by 2030 when they first put the goal into writing, but progress has stalled in large part because of the pandemic.

It took an incalculable toll not just on women’s health but on their livelihoods, French Gates says, adding that many were pushed out of the formal sector and lost their jobs in the informal sector. Consider that the labor force participation rate among women worldwide is 47%, whereas it’s 72% for men, per the report. That’s a 25% gap to parity.

But the pandemic is a “cop-out” in French Gates’ eyes. The real problem is that the world hasn’t focused enough on gender equality, she writes, adding that “when it does, it treats symptoms, not the cause.”

It’s why “gender-neutral” events like the pandemic end up exacerbating the gender chasm, she says, pointing to economic inequality as a root cause: The World Bank reported that pre-pandemic, the difference in expected lifetime earnings between women and men globally totaled $172.3 trillion, double the world’s annual GDP.

While efforts to close the gap have long focused on “empowering” women, Gates says that’s where we’re missing the mark—lasting gender equality instead relies on women actually gaining power. She spoke with Fortune about the three key areas of women’s power that are crucial to establish first.

The roots of women’s inequality begin during childhood. Unicef finds that 129 million girls are out of school worldwide, with only 49% of countries achieving gender parity in primary education.

“Young girls need to be educated,” French Gates says. “With your education, you can unlock doors.”

But to live your dreams, she continues, women “need to have access to contraceptives so they can decide whether to have children and space them.”

Projections from the Institute for Health Metrics and Evaluation, a research center at the University of Washington and a Gates Foundation partner, suggest that 77.9% of women ages 15 to 49 will have their family planning needs met with modern methods by 2030—short of the 100% an SDG is aiming for. That’s slightly less than the 78.4% of women who fell into that cohort in 2021, signifying a slowdown in progress for reproductive health care services over the next decade.

The third key is money. “When women have economic means in their own hands—not just cash, but in an account that they control—it unlocks all kinds of things for their lives,” French Gates says.

She’s placed great importance on helping women access digital bank accounts, particularly in lower-income countries where their access to new technology is often limited. It’s a tool we didn’t have 15 years ago, she says, accessible via smartphone or even an old plastic cell phone.

Even saving $1 or $2 a day via a digital bank account gives women power, she explains: feeding her family, sending her kids to school, building credit, investing in a business. Women worldwide have told French Gates that having these economic opportunities changed others’ perceptions of them, from their mothers-in-law to their husbands.

French Gates believes progress is possible for gender equality and the other 16 SDGs considering the substantial progress the world has made with past goals, from a decline in malaria deaths to widespread HIV treatment. But the pandemic and other conflicts, such as the war in Ukraine and the reversal of women’s rights in the U.S. and Afghanistan, have set the world back.

“What hangs in the balance is millions of people not going hungry or living a healthy life and having their full potential,” she says. “But the world’s got to make investments now. We’re going to get back on track, and we have a lot of catching up to do.”