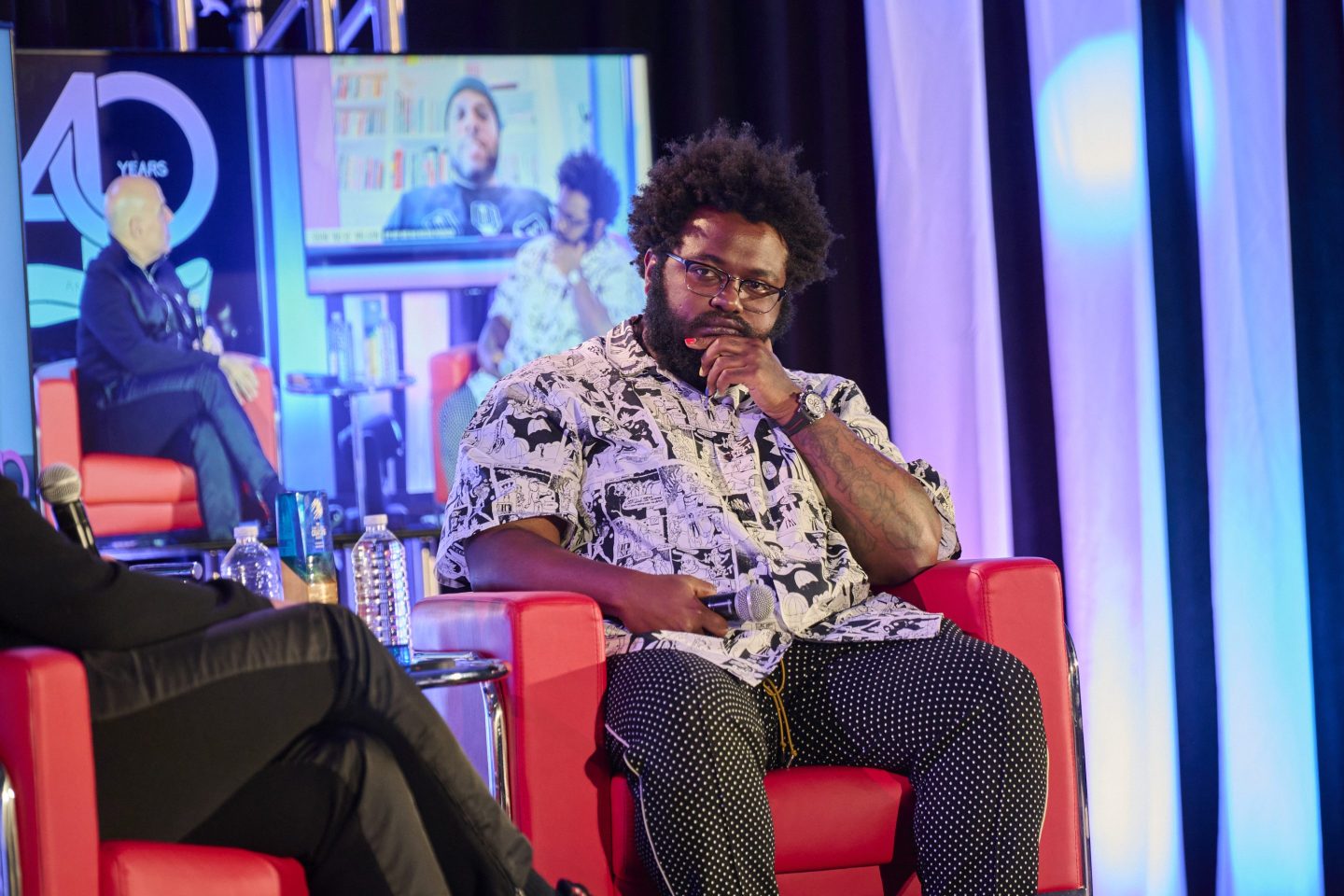 Music producer James Fauntleroy has begun work on album for a band made up of virtual apes.
Robert Okine—Getty Images

A rock band made up of virtual apes, created last year at the height of crypto mania, now has actual musicians putting together its sound—a pair of sought-after producers who have worked with Beyonce and Rihanna.

James Fauntleroy and Chauncey Hollis Jr., better known as Hit-Boy, have begun work on a new album for Kingship, a band Universal Music Group NV formed as part of a bet it can generate revenue from selling virtual goods and services built around acts. The hiring of artistic heavyweights marks a new phase of the project. Fauntleroy has won Grammys for his work with Bruno Mars and Justin Timberlake, while Jay-Z and Nas have collaborated with Hit-Boy.

“It only made sense to bring in the best creators and producers and songwriters,” said Celine Joshua, founder of Universal’s 10:22 record label. “For me, that process led to James and Hit-Boy.”

Joshua is the architect of Kingship, which consists of four digital characters from a collection of nonfungible tokens known called the Bored Ape Yacht Club. She has conceived a multiyear story arc for the apes, including album releases and metaverse performances. If all goes according to plan, they’ll take the world by storm and prove cryptocurrencies and NFTs are viable tools for the music industry.

Techno-optimists have long been outlining the promise of so-called Web3, a decentralized version of today’s internet. There, artists can raise money to fund production of an album by selling NFTs. Payments are more transparent, through the use of blockchain technology, and musical groups can give their fans a literal stake in their business.

All of it allows fans to forge a greater connection with their favorite acts. The people who own NFTs for Kingship get special access to a Discord server where they can talk with one another, or learn new information about the group first. There are also perks associated with future music and performances.

A collapse in the market for cryptocurrencies and NFTs has complicated the plan, which Joshua said is now in its second of at least seven phases.

Universal unveiled Kingship last November when optimism about cryptocurrencies was near its peak. NFT sales neared $25 billion in 2021 and the price of Ether (a popular currency for NFTs) peaked at almost $4,800. Investors, collectors and society at large were enamored with the new speculative market. The price of Ether has plummeted more than 55% this year, according to CoinMarketCap. Sales of NFTs are currently around their one-year lows.

That caused Joshua to delay her plans to sell NFTs for the band, and reduce the number of NFTs they first sold. But she has regrouped, generating $1.5 million by selling 5,000 Kingship NFTs earlier this year. She also struck a deal with Mars Inc. for a special edition M&M’s.

“We have seen the fluctuations in the marketplace and the decline of Ether and so many projects not fulfilling promises,” Joshua said. “Consumer sentiment changed. But we decided, or I decided, that we have a development plan.”

Yet her enthusiasm helped attract Fauntleroy, a self-professed nerd who has a second career as a digital artist. He started collecting Bitcoin, now trading at about $19,000, when it went for $9,000. He also has a collection of more than 30 NFTs.

“I bought a bunch of things that ended up not being worth” anything, Fauntleroy said. “But when I saw this community, I was like, ‘Oh.’ This is an inevitable transition to fan-based interaction.”

In an early meeting with Fauntleroy and Hit-Boy, Joshua played Van Halen’s “Jump” as an inspiration for the sound. The 1984 song topped the Billboard charts in the U.S. and was ranked by Rolling Stone as one of the 200 greatest songs of all-time.

Fauntleroy and Hit-Boy are now in the middle of working out how they want this group to sound. After weeks debating the members’ personalities, they’ve at least settled on their instruments of choice. Hud, an ape with laser eyes, is a lead singer. Arnell, a mutated ape, is the DJ/drummer. King is the bassist and vocals, and Captain is on lead guitar.

“They are a rock band with rock ‘n’ roll personalities,” Fauntleroy said. “We are still building out exactly how they’ll express themselves.”

—With assistance from Olga Kharif.