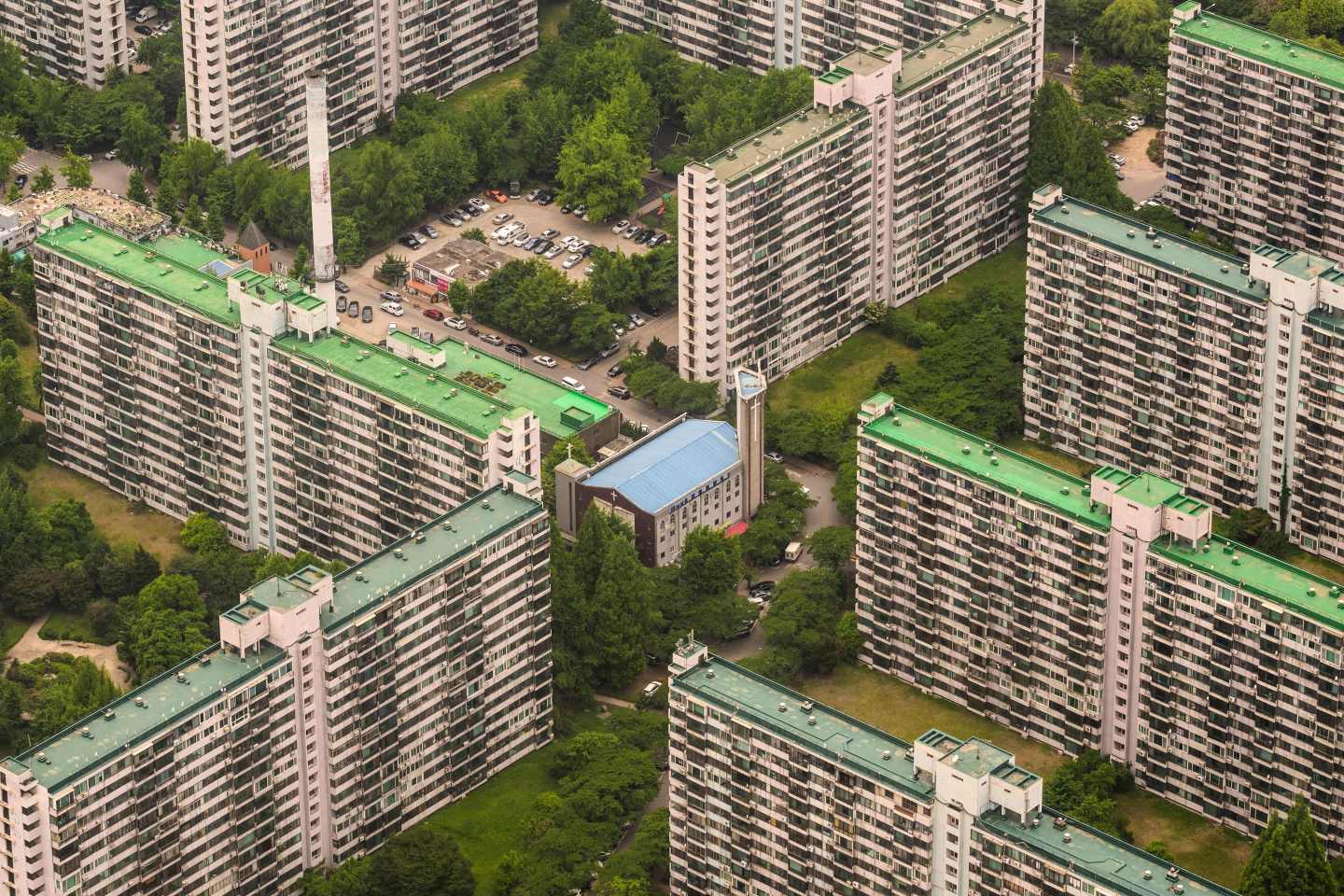 A church surrounded by residential buildings in the Gangnam district of Seoul on May 13, 2022.
Anthony Wallace—AFP/Getty Images

Property in Gangnam — a trio of exclusive districts in South Korea’s capital, Seoul — is beginning to buckle as the central bank’s yearlong tightening cycle weighs on the luxury real estate market.

Apartment prices in all Gangnam districts have declined for four consecutive weeks, data from the Korea Real Estate Board show, portending the first monthly decline since the Bank of Korea began raising its key rate last August.

The hit to Gangnam signals the impact of policy tightening is now reaching into the upper stratum of Korea’s 51 million people.

While Governor Rhee Chang-yong told Bloomberg that a housing correction was unavoidable and has a desirable element, concern over the property market and household debt are among factors that have prompted the BOK to return to smaller rate increases.

Gangnam apartments make up an overwhelming majority of Seoul homes factored into the Knight Frank Prime Global Cities Index, which has slowed after rising last year at the fastest pace since 2008.

The cooling momentum among the world’s most desirable and expensive 5% of homes coincides with the start of the Federal Reserve’s rate increases and rising concern about a global recession.

“My expectation is that we will see the index’s rate of growth slow further in the third quarter as economic headwinds mount,” said Kate Everett-Allen, head of international residential research at Knight Frank.

“But we expect our prime index to outperform our mainstream housing market indices where there is a greater reliance on finance and therefore more exposure to the rate rises.”

With Gangnam at its heart, Seoul’s prime real estate was Asia’s hottest in the past year, jumping 20.9% and outpacing both Tokyo and Taipei, according to Knight Frank.

Apartments tracked by Knight Frank include Raemian Dogok County, which costs up to 3.8 billion won ($2.8 million) per unit, and Acro River Park, priced at as much as 22 billion won. Samsung Tower Palace 3rd traded for up to 7.5 billion won, according to Korean portal Naver.

South Korean singer and producer Psy performs his biggest hit song, Gangnam Style, during a concert at an outdoor venue in the grounds of the Korea University in Seoul on May 27, 2022.
Anthony Wallace—AFP/Getty Images

Made internationally famous by Psy’s “Gangnam Style” music video, the districts symbolize wealth, status and chic among Koreans. Their cluster of prestigious high schools and network of influential residents make the neighborhood a Mecca for South Korea’s elite.

Compared with a year earlier, home prices in Gangnam still grew in July, rising about 5% — the slowest pace since the spring of 2021. It remains to be seen whether the downturn will last in the districts.

Still, when Gangnam falls, it tends to drop harder than many other areas. During the 2012-2014 downturn, Gangnam declined further than most of the rest of the country. Similar volatility was recorded during the 2008-09 global financial crisis.

Further pressure is likely to come, too, with central bankers including Fed Chair Jerome Powell warning at last month’s Jackson Hole meeting that borrowing costs are headed even higher and will remain elevated for some time.

Gangnam, once rugged farmland, is now home to 2 million people, including high-level officials such as President Yoon Suk Yeol, K-pop stars and an array of business and tech leaders.

Not everyone in the districts is rich and famous. When the heaviest rainstorm in 80 years hit Seoul last month, at least four Gangnam residents drowned in the basement homes that came to symbolize Korea’s deep wealth inequality in the Oscar-winning film “Parasite.”

The torrential rains also exposed unexpected gaps in some luxury apartments, submerging Lamborghinis, Porsches and hundreds of other luxury cars parked underneath them.

Koreans as a rule prefer apartments to standalone homes, in contrast to many Western countries. The cookie-cutter buildings take up less space in the densely-populated country and are viewed as safer against burglary, cheaper to manage and easier to trade because they are built to similar specifications.

The incipient correction in luxury homes isn’t limited to Gangnam, either. The 50 premium homes picked nationwide by Kookmin Bank have fallen for two months in a row, according to data released last week.

The cooling is a clear sign that the central bank’s policy tightening is flowing through to property.

Now, as home prices begin to fall, the tables are turning. But potential buyers aren’t rushing to brokers to try to secure a property.

The BOK’s rate rises and expectations of further tightening, together with the low volume of deals, are fueling expectations the downturn will be protracted.

“With households starting a deleveraging cycle, we expect housing prices to remain under pressure in coming years,”said Park Jeong Woo, an economist at Nomura Holdings Inc.