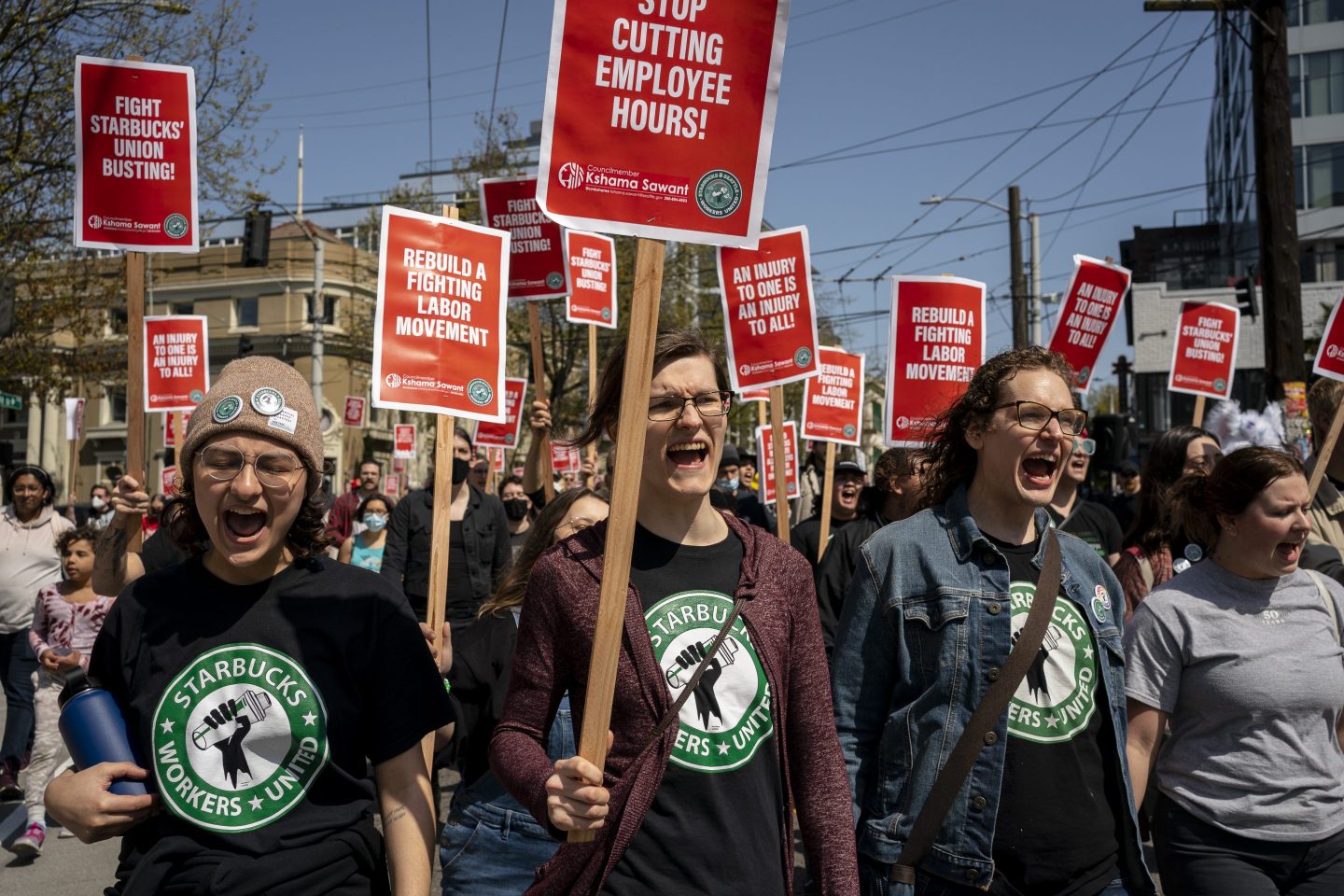 The union battle at Starbucks has spread to TikTok. And the baristas are winning.

A TikTok account run by Starbucks Workers United, the group of employees aiming to unionize the world’s largest coffee chain, has taken off this month with several viral posts. One video showing employees staging a walkout after the firing of a coworker more than 28 million views. In recent weeks, the account’s followers have ballooned from about 50,000 to more than 260,000.

Meanwhile, Starbucks has tried to counter with its own account, starting Starbucks Partners TikTok not long after the union debuted its feed late in 2021. The handle has 4,000 followers and its best-performing post generated 114,000 views.

Starbucks Workers United launched its TikTok in December, on the heels of its first victory in Buffalo, New York. But only recently have members posted more consistently on the social media platform that has surged in popularity in recent years, especially among teens and young adults. It has paid off with nine videos surpassing a million views and comments like “no contract, no coffee”—the movement’s rallying cry—flooding the official TikTok account of Starbucks.

“At first we were kind of like: ‘No, that’s more for jokes,’” said Casey Moore, a 25-year-old Starbucks barista in Buffalo who helps run the account. “Eventually, we were like: ‘Well, why not? Starbucks is huge on TikTok.’”

The TikTok account reflects the dynamism that’s brought this campaign a level of success not seen in the history of the U.S. labor movement, according to John Logan, a professor of labor history at San Francisco State University. Restaurant and retail chains have thwarted organized labor for decades as overall US union membership plummeted. But Starbucks workers are helping create a new template to challenge one of America’s biggest employers.

“You can dismiss it as silly little videos, but this is the new world of organizing,” Logan said. “They’re doing things I wish the unions had been doing, frankly, for the longest period of time.”

The approval rating of unions in the U.S. has hit 71%, the highest in nearly 60 years, with people under 40 being the biggest supporters. So-called Generation Z, whose oldest members are in their mid-20s, make up TikTok’s core audience and are increasingly turning to social media and away from traditional news sources to learn about current events.

Gen Z is important to Starbucks, too. Howard Schultz, the coffee chain’s founder who returned as chief executive officer on an interim basis in April, recently told analysts that cohort’s love of iced beverages, which they share with their followers on social media, helped drive quarterly revenue to a record $8.2 billion.

The company continues to work closely with its employees in “reimagining” the Starbucks experience, the company said in an emailed statement. “Through our collaboration sessions, direct engagement with partners and their direct feedback, we are building the future together.”

Moore and her colleagues are betting that the popularity of customers talking about their Starbucks experiences on TikTok—the #starbucks hashtag has almost 28 billion views—will help their posts. The platform’s algorithm is often considered the most adept at serving up related content that holds attention spans. What starts as seeing posts about the chain’s pumpkin spice lattes may now lead a user to videos of picket lines.

TikTok has also boosted outreach from current Starbucks workers who want to learn how to organize their stores, according to Moore. Through July, employees at 326 Starbucks locations have filed union election petitions with the National Labor Relations Board. The company has more than 15,000 U.S. shops.

“It’s just going to be an incredibly powerful tool to raise awareness about our campaign,” Moore said. “Just like strikes are a tool, TikTok is a tool that we can use in this fight.”

—With assistance from Josh Eidelson.