Student loans highlight Democrats’ divide in tough election year: ‘The cost of college is outrageous. But there’s nothing in here to control that’ 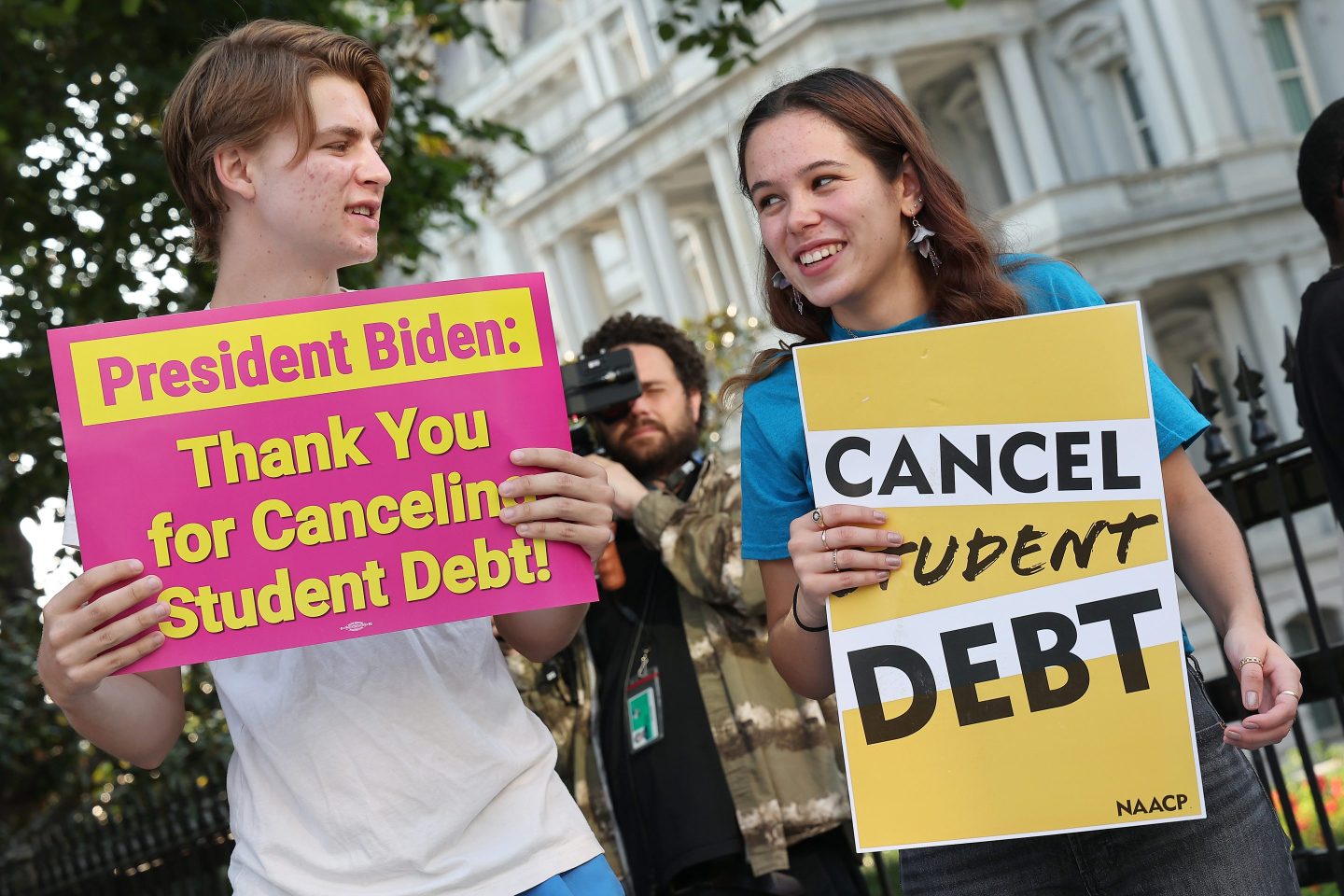 Student loan borrowers stage a rally in front of The White House to celebrate President Biden cancelling student debt and to begin the fight to cancel any remaining debt on Aug. 25 in Washington, D.C.
Paul Morigi—Getty Images for We the 45m

Tim Ryan, an Ohio Democrat running in one of the U.S.’s closest Senate races, said he opposed President Joe Biden’s student loan forgiveness plan, underscoring divisions in the party and worries that the issue could be a vulnerability in the midterm elections.

“We’re not saying that there’s not a significant burden here. The cost of college is outrageous. But there’s nothing in here to control that cost,” Ryan said Sunday on CNN’s “State of the Union.” “I think we can get a significant way down the road by allowing them to renegotiate down the interest rates and put some money in their pockets.”

Biden’s plan would forgive up to $10,000 in student debt for all individuals earning up to $125,000 and up to $20,000 for borrowers who received Pell Grants, a benefit for low-income students, while in college. However, the plan didn’t address the long-term issues surrounding higher education affordability. Such a plan would likely require congressional action.

Ryan, who faces Republican JD Vance for the Ohio Senate seat, exemplifies the difficult politics for Biden and Democrats as they balance acting on the promises they ran on in 2020, while also persuading voters to keep the party in power.

Other moderate Democrats, many of whom are facing tough re-elections this fall, also have criticized Biden’s plan. Senators Catherine Cortez Masto of Nevada and Michael Bennet of Colorado are among Democrats who have said they don’t agree with the order to cancel student loan debt.

Polling shows that only a slight majority of Americans support forgiving student loans. In Democratic strongholds, support is higher. But for candidates like Ryan, who has focused his campaign on supporting blue collar workers in Ohio, the politics of the decision are less clear.

Republicans are eager to exploit these differences between Democrats. Senator Roy Blunt, a Missouri Republican, called the loan forgiveness “monumentally unfair” on ABC’s “This Week” and said it would worsen inflation.

Senator Elizabeth Warren, speaking on CNN, countered Blunt, saying that the system as it stands is unfair because the public education system is out of reach for many low-income students.

Warren, a Massachusetts Democrat, said that if Democrats have majorities in both the House and Senate that they should address the cost of college.

Cedric Richmond, an adviser to the Democratic National Committee, defended the student loan plan, by equating it to tax benefits for business. Not everyone is a business owner, but credits and deductions help those companies compete, Richmond said on “Fox News Sunday.”

“This country is not a zero sum game where somebody has to fail for others to succeed,” said Richmond, a former Louisiana congressman and adviser to Biden.

Sanders was more blunt in his defense of the Biden’s plan: “I don’t hear any of these Republicans squawking when we get massive tax breaks for billionaires,” he said on ABC’s “This Week.”

As part of the debt forgiveness announcement, Biden also said that borrowers would continue to have a moratorium on making monthly payments, a pause that began more than two years ago as part of pandemic-related relief. Borrowers will have to start paying again next year, but a new program will cap amounts at 5% of monthly income.