‘Thanks for hating, it helps the movement’: How a 19 year old used her internet trolls to raise $2 million for abortion access in less than a week 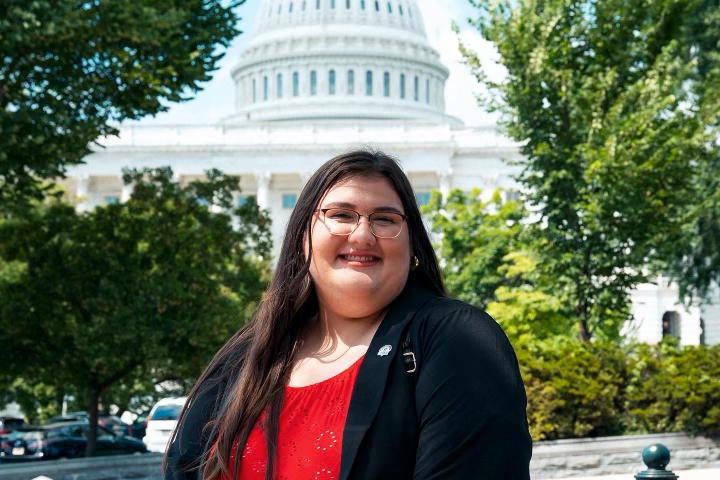 “Welcome to Texas! Where the government regulates our bodies more than our electrical grid,” 19-year-old Olivia Julianna wrote in early July.

The Houston-based teen was referring to the state’s abortion ban after the reversal of Roe v. Wade, just one of many young people to speak out about the legislation.

But Olivia received a biting response from a popular account: “Feel free to f— off to anywhere else!”

She says the reply opened the floodgates of online trolls, who made fatphobic digs at her body.

“Hate comments do not bother me whatsoever,” Olivia told Fortune. “I just really couldn’t care less.” She pledged to donate $1 to an abortion fund in the name of every person who sent a comment, tweeting: “Thanks for hating, it helps the movement.” Beyond giving out $350 herself, Olivia urged others to match her with their own contributions, raising $1,500 in total for abortion access causes.

But the experience gave her an important insight: She could turn social media vitriol into money for the causes that were important to her. So a few weeks later, when Florida Republican Rep. Matt Gaetz targeted Olivia on Twitter after saying that abortion activists were overweight and unattractive, she was ready.

Without ever having led an official fundraiser, Olivia mobilized his insults and the growing social media attention into $2 million to support 50 abortion funds across the country in less than a week. That number has now climbed even higher.

“I don’t think he could have picked a worse person to pick on than me,” Olivia said.

The path to $2 million

Olivia got involved in politics at 17 and built a steady social media following of thousands over the last few years by encouraging young people to vote in Texas elections.

She works at Gen-Z for Change, an activist collective, and has long believed that abortion access was one of the issues that would send people to the ballot box, suspecting early on that Roe would fall.

Since Roe was dismantled in June, at least 10 states have banned abortion. Clinics and abortion funds, which help cover the logistical costs of the procedure, have relied on donations more than ever as pregnant people seeking abortions flood into states where it’s still legal, often racking up considerable costs to do so.

That’s why in mid-June, Olivia decided to fundraise to assist these groups through Gen-Z for Change. They chose 50 abortion funds in states gearing up to receive a huge influx of patients from places where abortion has been banned or restricted. Donations reached $26,000 shortly after the fundraiser launched.

But it was over a month later, when Olivia got singled out by Gaetz, that the fundraiser really started taking off.

The congressman shared a photo of Olivia to his followers on Twitter with the caption “Dander raised.” It referenced a NewsMax headline that claimed Gaetz’s speech—where he implied abortion activists were all “5’2, 350 pound” women who “nobody wants to impregnate”—was “sure to raise dander of his political opponents.”

“In honor of Matt Gaetz publicly body shaming me, I’ll be fundraising for the @genzforchange abortion fund,” Olivia tweeted on July 25.

“Nobody should be tolerating a sitting Congressman bullying a teenager regardless of your opinions on abortion,” Olivia said.

A spokesperson for Gaetz told Fortune: “With Roe v. Wade overturned, America is now a pro-life nation. No amount of solicitations will change that.” His office denied Olivia’s characterization that Gaetz’s remarks were body shaming. “Congressman Gaetz never mentioned the adult’s weight. Leftist media did.”

Within 24 hours of sending the tweet, Olivia achieved the initial fundraising goal of $50,000. She credits her background in organizing for helping her think of creative ways to continue the momentum and blow up the fundraiser. She made sure eyes stayed glued to her feed with constant update posts on TikTok, Instagram, and Twitter. She says she saw the most success by far on Twitter, where she has gained 162 million impressions in the past month through addressing sassy thank you cards to Gaetz, offering to send flowers, and urging her followers to donate more.

“My job is political strategy,” she said. “It’s knowing how to capitalize on political moments to get the outcome I want.”

Other Gen-Z for Change staff consistently updated the fundraiser, first increasing the goal for every $50,000 received and later every $250,000. The large dollar amounts also caught the attention of abortion fund recipients; some asked Olivia to relay messages on how the money will make a difference.

“The money y’all have raised for us & our sibling funds is nothing short of life-changing,” wrote the Abortion Fund of Ohio. “Thousands of people will now be able to access care—whether in their home state or outside it—because of your work.”

‘Ready to capitalize, and ready to raise money’

The fundraiser is currently inching toward its latest goal, $2.5 million dollars. Olivia hesitated when asked if the target will go up again if that’s reached.

“Honestly, at this point, I’m just taking it day by day,” she said.

Her life has seen a dramatic change in the past week and a half. Each day has become a nonstop blur of events, TV appearances, and photos—she says she’s taken around 400 in the past week. She’s also fielding “insane” job offers, and proposals to pay for her college tuition—a stark change from her circumstances just a few months ago.

“When you’re a young woman of color, let alone a young plus size, queer, disabled woman of color, you’ve got to claw and scratch to get opportunities because they are so short and limited,” she said. “It’s just really surreal.”

But there’s more to come as Olivia plans upcoming trips to Philadelphia, Austin, and Nashville to speak at events about abortion rights and advocacy.

While numbers can feel theoretical online, it’s those in-person encounters that Olivia says show her the impact she’s making. At events, she said sexual assault survivors—one of the groups most impacted by the Roe overturn—have shared how her content has helped them. People say her stance against body shaming and openness about her eating disorder history allowed them to grapple with their own self-image issues. She says the youngest to ask for a photo was 13, and the oldest, a 93-year-old woman.

“It makes me speechless,” she said. “I knew that we would be helping people get access to abortion, but I didn’t realize that this would be emotionally impacting people in the way that it has.”

What’s next? “More fundraisers are definitely coming,” she said. She’ll stay in Texas when starting college as a political science major in the spring.

As for Gaetz, Olivia has a message: keep talking.

“I’ll be there ready to capitalize, and ready to raise money,” she said.