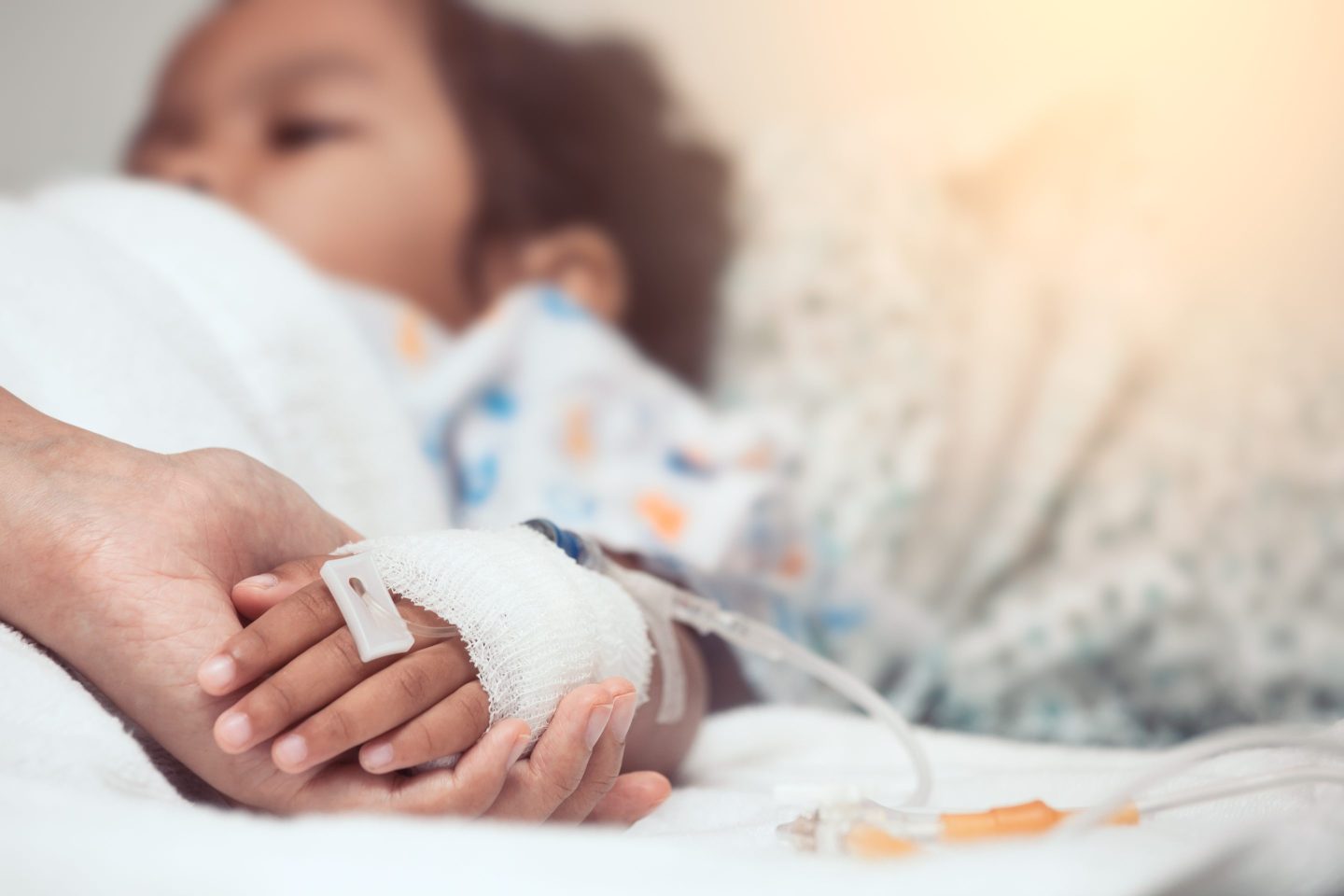 Half of all rare-disease patients are children, and their families have long pushed to speed up cures, usually by forming foundations that seed money for research.
Getty Images

Maggie Carmichael wasn’t developing like other kids. As a toddler, she wasn’t walking and had a limited vocabulary for her age.

She was diagnosed with PMM2-CDG, potentially fatal gene mutations that cause abnormal enzyme activity—and affect fewer than 1,000 people worldwide. Her parents, Holly and Dan Carmichael, raised $250,000 for scientists to screen existing drugs to find a potential treatment, and in a single-patient trial with Maggie as the test subject, one drug showed promising results. The young girl stopped face-planting when crawling, she began using a walker instead of her wheelchair, and her lexicon expanded.

The Carmichaels and their organization, Maggie’s Cure, could have handed off the work to a biotech company. Instead, the family from Sturgis, Michigan, formed a joint venture partnership with Perlara PBC, a San Francisco company that tries to identify new and existing drugs to treat rare diseases. The Mayo Clinic would later join as a co-owner of Maggie’s Pearl.

The company secured approval last December for a 40-patient clinical trial that could one day lead the FDA to approve the drug for PMM2-CDG. It would also defy what doctors told the Carmichaels about the prospects of a treatment when Maggie was diagnosed at 9 months:

“Not a snowball’s chance in hell.”

Half of all rare-disease patients are children, and their families have long pushed to speed up cures, usually by forming foundations that seed money for research. If there are promising findings, many hand the work off to biotech companies to develop treatments. Now, some families are forming their own biotech businesses, acting as drug developers to find treatments for ultra-rare diseases that affect 1,000 patients or fewer.

But their chances are slim.

This means families aren’t likely to find a cure—let alone make a profit.

“If a drug should get approved for a disease with 1,000 patients, the probability that there are any material profits, I would say, is actually remote,” said James Geraghty, who is on biotech boards and is the author of “Inside the Orphan Drug Revolution: The Promise of Patient-Centered Biotechnology.”

But families say cures, not profits, motivate them.

According to the National Institutes of Health, there are roughly 7,000 rare diseases, affecting nearly 1 in 10 Americans. A rare disease is generally considered one that affects fewer than 200,000 people in the U.S. at a given time. Only 30% of children with rare diseases will live to see their 5th birthday.

Courtney Boggs, a member of the Cure Mito Foundation, with husband Jacob and daughters Emma (left) and Riley. Emma, 6, who has Leigh syndrome, can’t walk without assistance and eats through a feeding tube. The foundation has been working for a treatment, but the company it partnered with has paused its work on it.
KHN—Family Foundation (Whitlock)

Some 95% of rare diseases are without an FDA-approved treatment or therapy.

Upon a child’s diagnosis, parents will often quit their jobs and reorder their lives to find a treatment. Families will use their own money or raise funds to enter the arena. Dozens, if not hundreds, of nonprofit family foundations across the nation focus on rare-disease treatments amid the dearth of public and private funding.

Drugmakers can charge exorbitant prices for rare-disease drugs, so it can be highly profitable to target rare diseases like cystic fibrosis, which affects up to 200,000 Americans. But the market becomes much less attractive for ultra-rare diseases because of the much smaller pool of patients.

Drug regulations prohibit the Carmichaels from sharing how Maggie is doing now because of the clinical trial, but Maggie’s Pearl, assuming its drug earns FDA approval, says it aims to ensure the treatment can be accessed by all with the disease.

The Carmichael family is helping to pay for a clinical trial it estimates will cost $3 million to $5 million. The family won’t say how much it’s contributing, but $2 million is coming from a federal Small Business Innovation Research grant.

Holly Carmichael, chief operating officer of Maggie’s Pearl, says she’s motivated to shepherd a drug’s development while keeping prices lower than they might otherwise be. “We’re not a traditional biotech with shareholders that have certain profit thresholds,” she said.

The company has pledged to reinvest a portion of its profits into research and development. The rest would flow to the venture’s owners, including the Carmichael family.

In that way, Maggie’s Pearl is “just like any other business,” said Ethan Perlstein, the CEO of Maggie’s Pearl and Perlara, which counts Swiss drug giant Novartis AG and entrepreneur Mark Cuban among its early investors. Convicted pharmaceutical executive Martin Shkreli was bought out of his early stake in Perlstein’s venture.

Last month, a Boston company called Vibe Biotechnology announced a cryptocurrency-based model to raise money for rare-disease drug development. Investors will have the power to vote on rare-disease research proposals, and patients’ families have ownership stakes in promising therapies.

“The challenge for rare diseases isn’t necessarily finding a treatment—it’s funding it,” said Alok Tayi, CEO and co-founder of Vibe Biotechnology, in a statement. “For the first time, Vibe Bio is giving patients with rare and overlooked diseases access to the funding and community support they need to develop cures and ownership over the results.”

The company has launched two biotech companies in partnership with two foundations: Chelsea’s Hope, which is focused on Lafora disease, a fatal form of progressive myoclonus epilepsy, and NF2 BioSolutions, which hopes to accelerate a gene therapy for neurofibromatosis Type 2, which causes the growth of noncancerous tumors in the nervous system.

One reason more families strike out on their own is for greater control.

Typically, if research advances far enough, families entrust biotech companies to bring drugs to market. A company usually gains intellectual property rights as part of taking on the financial risks of developing such treatments. But if that company shelves the program, parents are left helpless and heartbroken.

The Cure Mito Foundation—along with other family foundations—funded research in Steven Gray’s lab at the University of Texas Southwestern Medical Center.

Taysha Gene Therapies, a company formed in 2019, pledged to accelerate Gray’s research and take financial pressure off families. In return, Taysha gained potentially lucrative research licenses and controls the rights to these programs.

In March, Taysha announced it would cut 35% of its staff and shelve much of its portfolio, reflecting an industry downturn. The pause included Cure Mito’s campaign to develop a treatment for Leigh syndrome, a neurogenerative condition that leaves some children unable to walk and breathe on their own.

Taysha’s pause has worn on Courtney Boggs, a member of the Cure Mito Foundation. Her daughter, Emma, is a cheerful 6-year-old who loves reading and playing with dolls. She eats through a feeding tube and cannot walk unassisted, and her condition will worsen without treatment.

“We need something for our kids, and not just our kids, but future generations,” said Boggs, who lives in El Paso, Texas.

Taysha, which is among a small number of companies investing in treatments for ultra-rare disease, narrowed its focus from more than 20 to four rare-drug programs.

“We share the disappointment and frustration of our patients and their families right now,” the company said, “but truly believe the tough decisions we are making today will best position us to conduct new trials in the future.”

Other families are trying to prevent that scenario by securing more favorable terms when doing business with biotech companies, such as licensing payments and the ability to claw back rights to medications if drugmakers take too long.

Craig Benson, a finance executive from Austin, Texas, and his wife, Charlotte, formed the Beyond Batten Disease Foundation to find a treatment for their 19-year-old daughter, Christiane, who suffers from Batten disease, which causes vision loss and seizures.

The Bensons’ foundation funded a therapy that the French pharmaceutical company Theranexus licensed in 2020 and is in early-stage clinical trials. As part of the deal, Theranexus shouldered development costs and paid the foundation an undisclosed upfront sum. The foundation may receive additional payments and royalties on sales if the drug wins regulatory approval. Beyond Batten is reinvesting its money to search for additional treatments that could complement the potential therapy.

This story was produced by KHN (Kaiser Health News), a national newsroom that provides in-depth coverage of health issues and that is one of the three major operating programs at KFF (Kaiser Family Foundation). KHN is the publisher of California Healthline, an editorially independent service of the California Health Care Foundation.