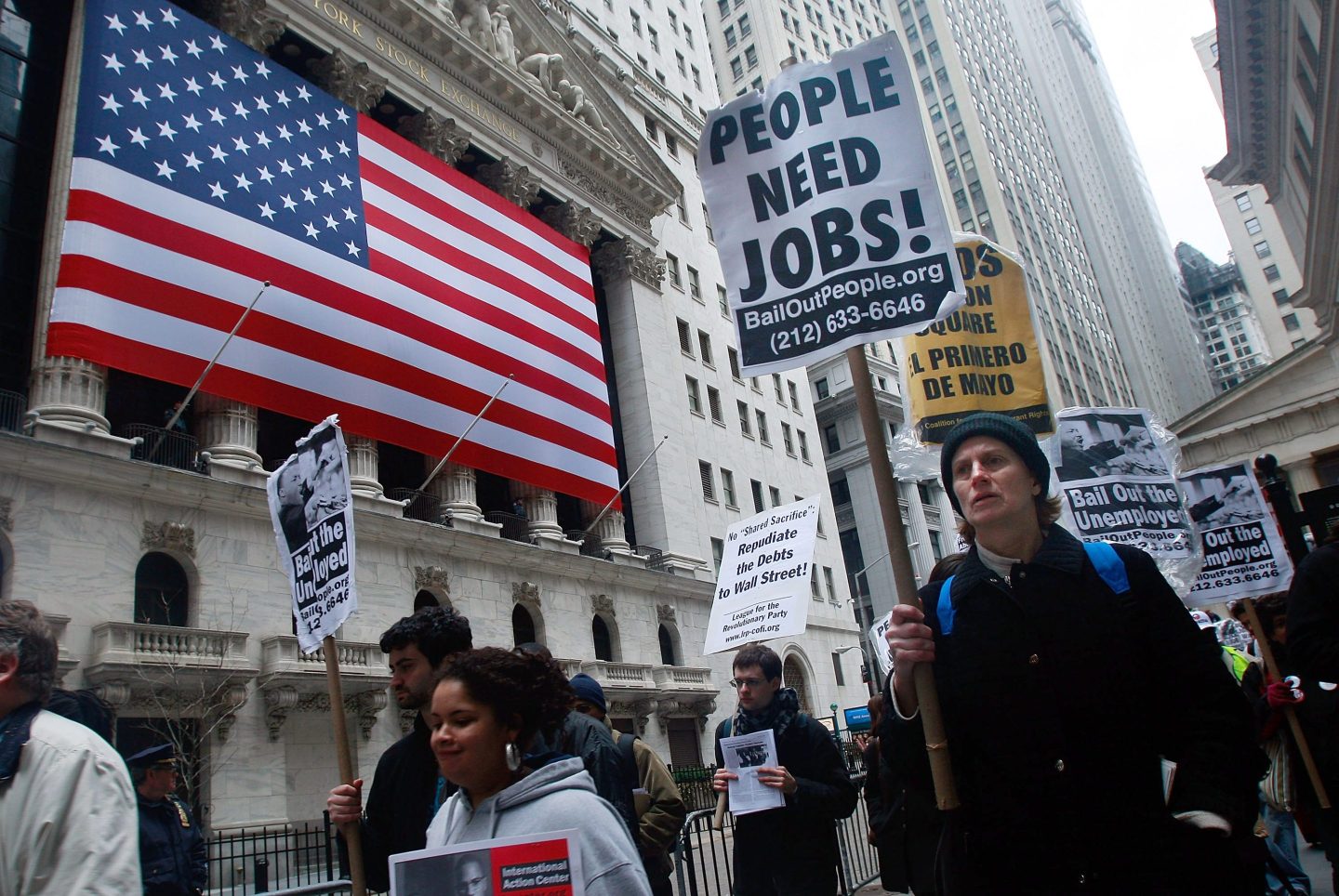 People protest against government bailouts of banks outside the New York Stock Exchange in April 2009. The Great Recession—a real one—lasted from 2007 to 2009.
Mario Tama—Getty Images

Economic pessimism appears to be gaining traction by the day, with banks, corporate leaders, and consumers sounding the alarm about a recession looming on the horizon.

However, Aneta Markowska, chief economist at Jefferies, argues in a new research report that while the economy is facing several headwinds, a recession is not imminent.

“Households and businesses still have a lot of cash, which makes their demand price and rate inelastic in the short-term,” she said. “So while the Fed was able to cool housing demand very quickly, reducing consumption and labor demand will take more time.”

She also pointed to the unemployment rate as an indicator that a recession was not about to take hold of the U.S. economy, noting that there were still millions of job openings and margin pressures were not yet intense enough to induce “a full-blown layoff cycle.”

Doubling down on the strength of the American labor market, Markowska said she expected the national unemployment rate to continue to decline, bottoming at around 3.2%.

Recessions are widely regarded as occurring when there are two consecutive quarters of negative growth in a country’s gross domestic product (GDP).

However, the National Bureau of Economic Research, which defines a recession as a significant decline in economic activity that is spread across the economy and lasts more than a few months, considers several areas of economic activity as potential recession signifiers, including real personal income, nonfarm payroll employment, and industrial production.

With household income and employment rates still appearing to be in good shape, Markowska said a 2022 recession would be “fake.”

“Put differently, the current recession exists purely in the imagination, not in the real world,” she said.

The imminence of a U.S. recession has divided market watchers, many of whom are deeply concerned about inflation reaching its highest level in decades.

Earlier this month, Andrew Hunter, a senior economist at the independent macroeconomic research firm Capital Economics, wrote in a research report that the strength of June’s non-farm payrolls report “appears to make a mockery of claims the economy is heading into, let alone already in, a recession.”

Meanwhile, a top Harvard economist said this week that he saw less than a 50% chance of a recession.

Others—including JPMorgan Chase CEO Jamie Dimon, billionaire investor Carl Icahn, and the head of the World Bank—disagree, having sounded the alarm that a recession is on the horizon.

In May, the world’s richest man Elon Musk said the U.S. was “probably” already in a recession that could last up to 18 months.

At the end of June, a reading from the Conference Board showed that consumer expectations for the U.S. economy had fallen to a nine-year low.

While Jefferies’ Markowska did not believe a recession was already underway or right around the corner, she conceded that an economic downturn in the U.S. was inevitable.

She said she expects U.S. GDP for 2022 and 2023 to come in at 2.2% and 0% respectively, and has forecast a recession to begin in the second half of next year and last for five quarters.

According to Markowska, economic risks “are still skewed toward higher rates,” and the Federal Reserve is likely to “front-load this tightening cycle,” bringing its benchmark funds rate as high as 4.25% by March 2023.

Markowska predicted that interest rates at this level could accelerate downward momentum in economic growth.

Last month, the Fed carried out its biggest rate hike since 1994, and the central bank’s policymakers expect their core rate to be within the range of 3.25% and 3.5% by the end of the year.