Sri Lankan protesters deposed their president. Now the bankrupt country has no leader to negotiate a bailout with the IMF 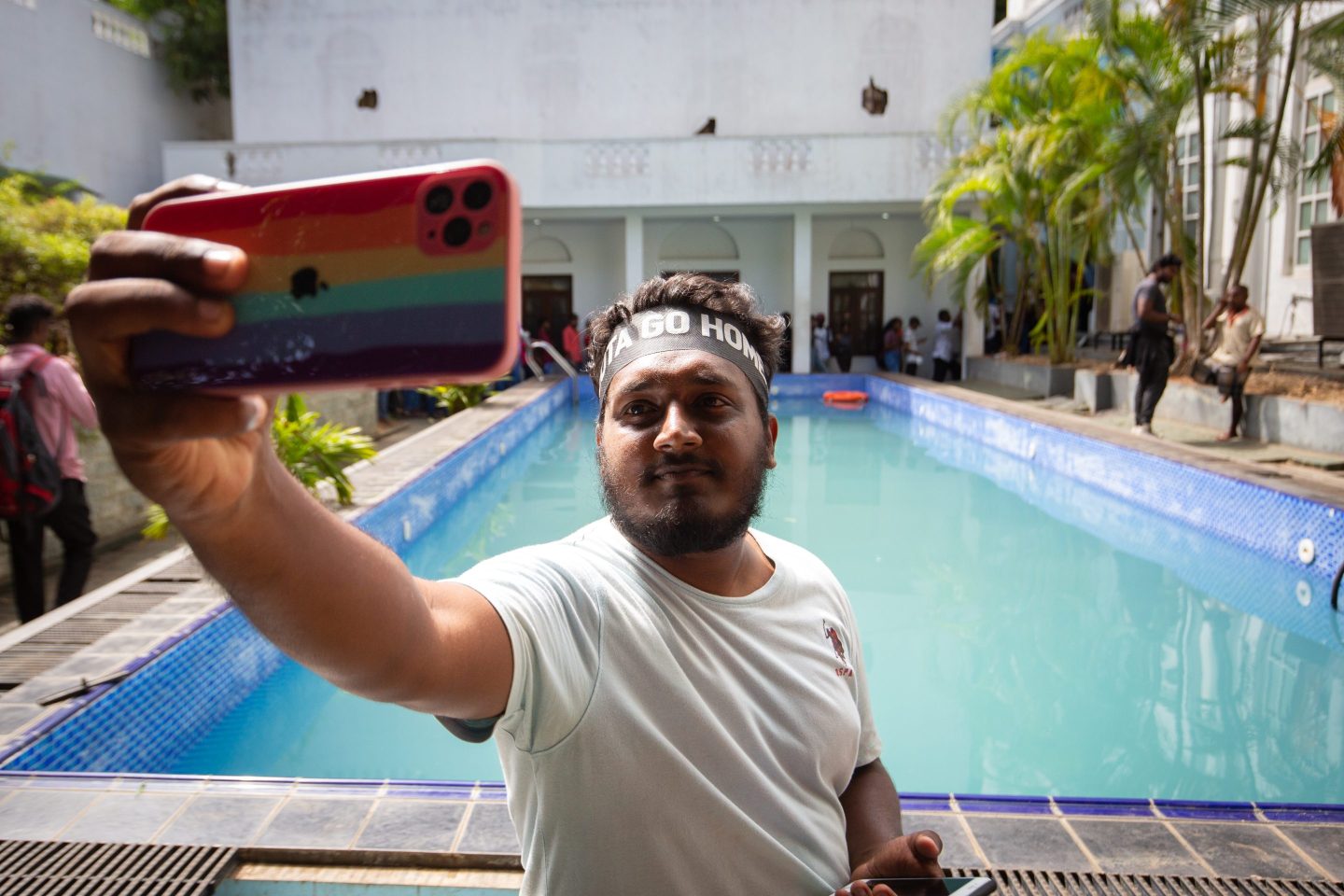 Protesters made use of Sri Lanka’s presidential palace after storming the stronghold on Sunday, forcing the president to flee the country and resign.
Abhishek Chinnappa—Getty Images

The 18-year reign of Sri Lanka’s Rajapaksa dynasty came to an end by email. On Thursday, the president-in-exile, Gotabaya Rajapaksa, clicked “send” on his digital letter of resignation to Parliament, having fled the island nation to Singapore via the Maldives a day before.

The former president ran from protests that have gripped the country for months, with thousands of demonstrators marching against food and oil shortages caused by the government’s historic mishandling of Sri Lanka’s foreign currency and debt. The South Asian nation ran out of money for fuel imports in May and declared bankruptcy in early July.

The UN World Food Program says 90% of Sri Lankan families are skipping meals in order to ration food, while 3 million individuals—13% of the population—are already receiving emergency aid. On Sunday, protesters stormed the president’s already-abandoned palace and torched the private home of the country’s prime minister. Demonstrators seized the official residence of the prime minister, too, turning the colonial manor house into a free community kitchen.

Weeks before the government collapsed, Sri Lanka belatedly entered discussions with the International Monetary Fund to receive a bailout for the country’s $51 billion of sovereign debt. With the president now deposed, Rajapaksa-appointed Prime Minister Ranil Wickremesinghe is holding the government together, after returning to the post in May for the sixth time in his career. But Wickremesinghe has vowed to step down once Sri Lanka’s 225-seat Parliament elects a new president on July 20.

Reuters reports there are three front-runners for the embattled country’s top job: opposition leader Sajith Premadasa; former journalist and longtime lawmaker Dullas Alahapperuma; and Wickremesinghe himself. Whomever Parliament elects will face the dual challenge of heading negotiations with the IMF, as well as placating protesters thronging government complexes.

In the interim, the challenge of restructuring the country’s debts and pumping fresh financing into government coffers has stalled. Without an official president or a dedicated prime minister, the country’s central bank and finance minister—a role also filled by Wickremesinghe—are in the hot seat. But the IMF appears unwilling to progress with negotiations until the country has formal leadership in place once again.

“Like everyone else we are, of course, deeply concerned about the ongoing crisis, its impact on the Sri Lankan people, and particularly the poor and the vulnerable groups in Sri Lanka,” IMF director of communications, Gerry Rice, told media in an online briefing Thursday.

“We do have technical counterparts still in some of the key ministries in the central bank and the ministry of finance. So we are able to continue discussions there. But [as for] the high-level discussions with the authorities that we would need to begin discussions on a program—we hope that these would be able to resume as soon as possible.”

Sri Lanka turned to the IMF in April, seeking a bailout loan to replenish the country’s barren foreign reserves, but the IMF has expressed concern about providing assistance without also redressing Sri Lanka’s foreign debt. The island nation had roughly $7 billion in loan repayments due this year, with money owed to both private and sovereign debt holders. Wickremesinghe says Sri Lanka has only $25 million left in foreign reserves.

The Wall Street Journal reports some government officials have grumbled that the country should have gone to the IMF earlier but, instead, Sri Lanka turned to China for $3 billion worth of loans during the pandemic. Japan and China are among Sri Lanka’s core creditors, each holding roughly 10% of Sri Lanka’s debt, although outgoing Prime Minister Wickremesinghe has reportedly said interest rates on the Chinese loans are much higher. With Sri Lanka now in collapse, Beijing will be a vital player in salvaging the country from its own crushing debt.

“We are really looking to China to step up their role in debt restructurings that are eligible for treatment under the common framework; we’re not seeing much progress,” U.S. Treasury Secretary Janet Yellen said during a G20 Finance Ministers meeting in Bali, Indonesia, on Thursday.

“Part of what I expect to do over the next several days is urge our partners in the G20 to put pressure on China to be more cooperative in restructuring these unsustainable debts,” Yellen added, referring not only to Sri Lanka’s debt, but all the China-held debt of low-income countries.

Wang avoided answering whether China had agreed to loan Sri Lanka “bridge financing” to keep the country running as it reorganizes, after Bloomberg reported Tuesday that Sri Lanka had turned to Japan and China for possible emergency loans. India has already provided its southern neighbor over $3 billion in bridge financing this year but is now demanding the country pay for fuel imports upfront, signaling an apparent end to Sri Lanka’s last line of international credit.