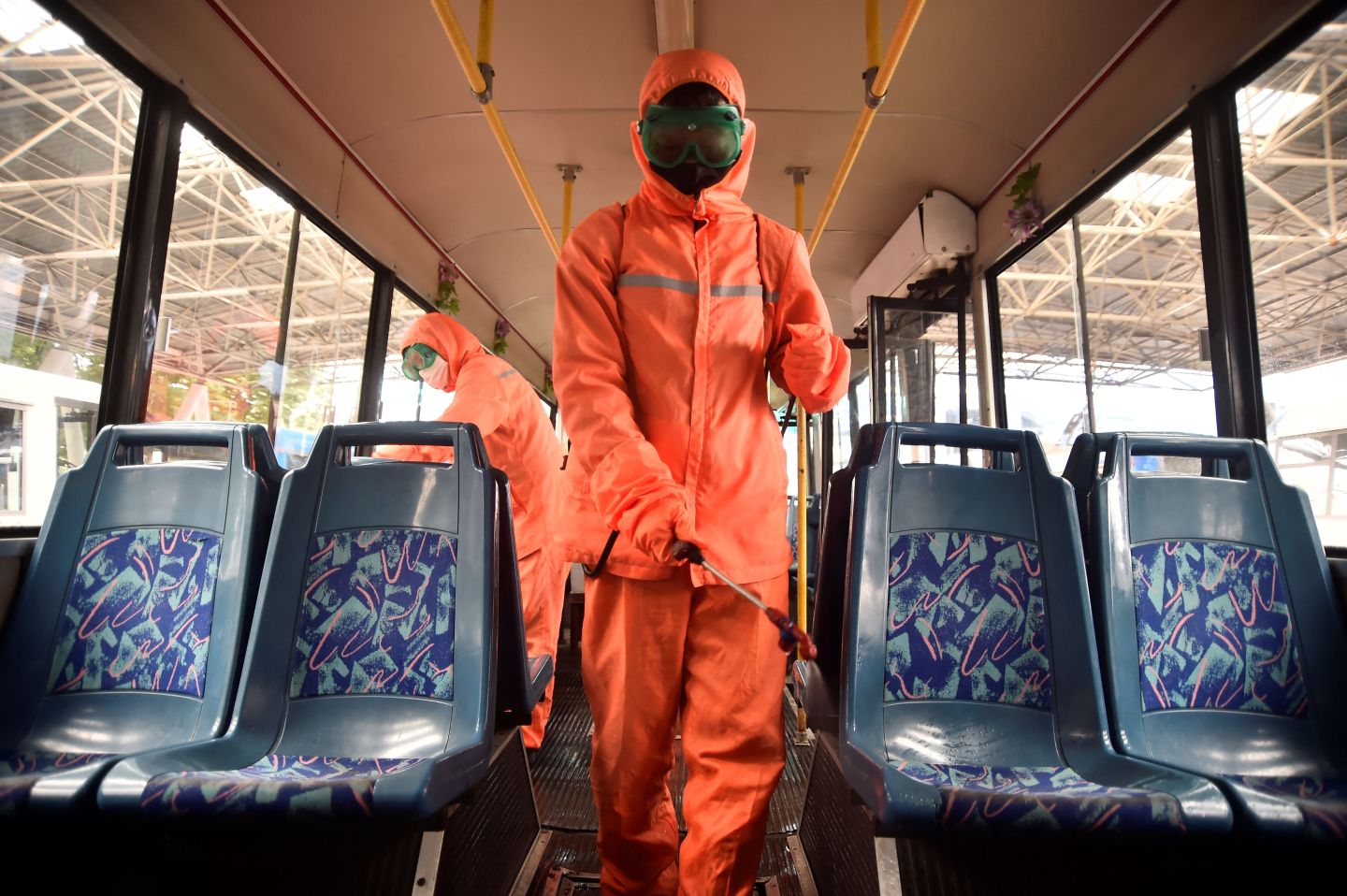 Health officials of the Ryonmot Trolley Bus Office disinfect a trolley bus, as part of preventative measures against the COVID-19 coronavirus in Pyongyang on June 9, 2022.
Kim Won Jin—AFP/Getty Images

North Korea blamed its COVID-19 outbreak on “alien things” likely sent by balloon across its border with South Korea, saying a teenage soldier and a five-year-old girl in April were the first people in the country infected by coronavirus.

Kim Jong Un’s regime called on its officials “to vigilantly deal with alien things coming by wind and other climate phenomena and balloons in the areas along the demarcation line and borders,” the official Korean Central News Agency said Friday.

South Korea’s Unification Ministry repudiated the claims from North Korea. It said in a briefing with the reporters the balloon launches took place in late April, after Pyongyang said the first infections appeared mid-month. The ministry added medical research shows there are no precedents for the type of transmission described by its neighbor.

“The government does not see the possibility of the coronavirus entering the North through leaflets sent by South Korea’s side,” deputy ministry spokesman Cha Deok-cheol said at the briefing, referring to the balloons that also contained messages critical of Kim’s government.

Human rights groups led by defectors in South Korea have been sending balloons with what they say is COVID aid across the border from the western side of the peninsula. Although it is possible to contract COVID by touching some surfaces, the chances of it being sent by balloons traveling more than 200 kilometers (125 miles) is extremely low. Kim Dong-hyun, a former president of Korean Society of Epidemiology in South Korea said North Korea’s claims sounded like “nonsense.”

The report in North Korea’s state media pinpointed the start of infections, saying cases emerged from the Ipho-ri area in the eastern county of Kumgang.

“While North Korea did not explicitly link the ‘alien things’ to the COVID relief sent by the defectors’ group, it certainly guides the citizens to think so,” said Cheong Seong-chang, director of the Center for North Korean Studies at the Sejong Institute think tank in South Korea.

North Korea, which shut borders at the start of the pandemic more than two years ago, reported in May that it had its first confirmed Covid case. Officials from the US, Japan and elsewhere said as early as July 2020 the virus had almost certainly made its way into the isolated country.

There are plenty of places where the virus could have entered. While airports have largely been shut during the pandemic, the regime reopened a rail link with China in January and black-market traders frequently cross the border. A United Nations body has said satellite images show sea traffic at its main international port of Nampho, and illicit trade is conducted on the open seas in violation of sanctions.

China and Russia had reported outbreaks near their borders with North Korea more than two years ago. The two Koreas are separated by a buffer zone 4 km wide that is lined with land mines and razor-wire fencing on both sides.

Kim has long trumpeted his virus-control measures as evidence of his nation’s superiority and was probably forced to say the disease had entered the country because the number of people infected had grown so large that it could no longer be brushed aside.

North Korea has so far refused all foreign vaccines, leaving its 26 million people vulnerable to even mild strains in a nation where healthcare is already unreliable. Its Foreign Ministry said on Friday that offers of help from the US and Western countries carried an “ulterior political purpose,” NK News reported.

In June, officials in Dandong said they suspected the wind blowing from their secretive neighbor North Korea may have carried the virus into the Chinese corder city. In January, China and North Korea restored a rail link between Dandong and Sinuiju on a trial basis after the heavily used trade route had been cut for about a year and a half due to pandemic fears.