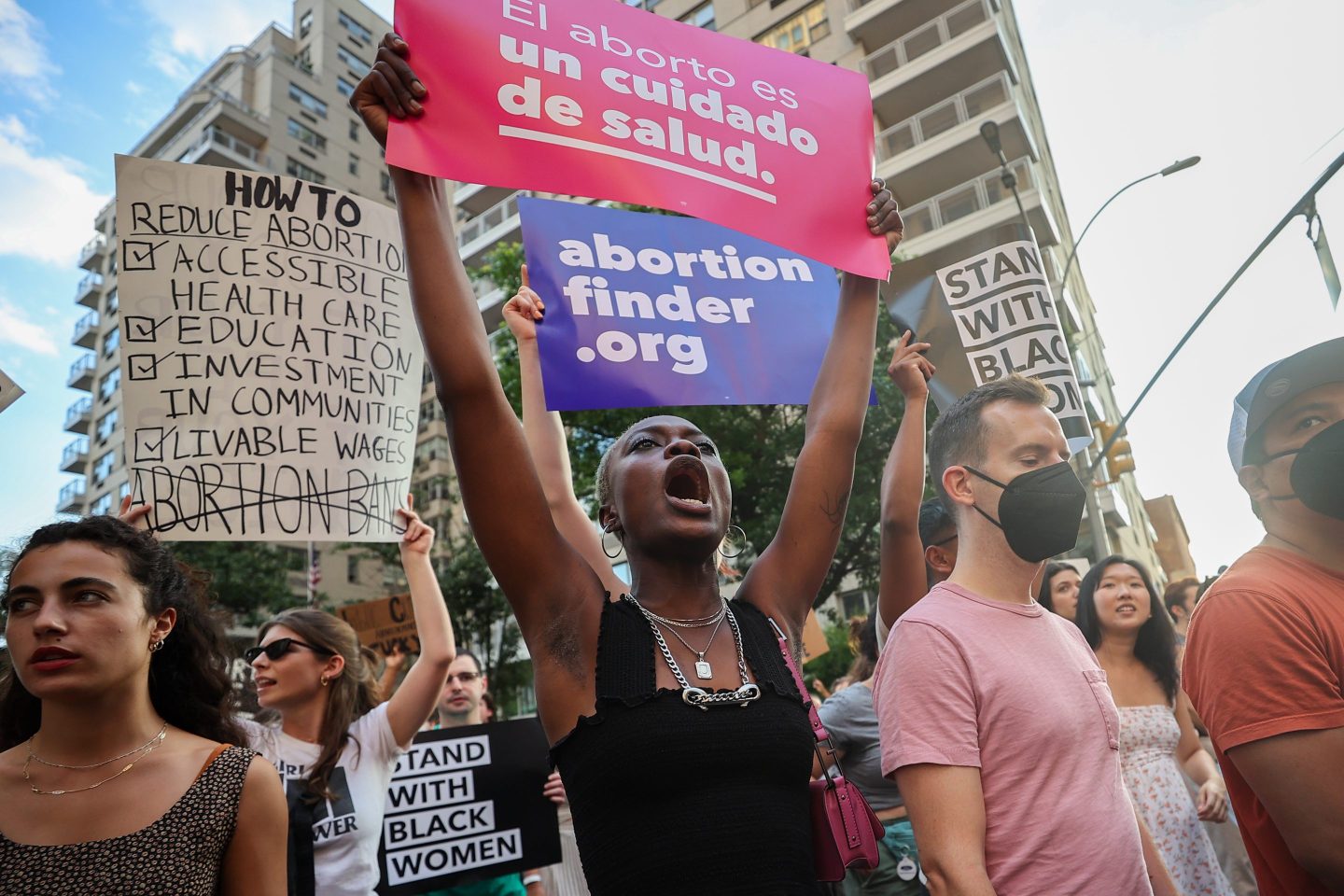 In response to the Supreme Court’s overturning of Americans’ constitutional right to abortion, large employers thought they had found a way to help workers living in states where abortions would be banned: provide benefits to support travel to other states for services. But that solution is only triggering questions.

“How will law enforcement react to health-related travel, and how will employers respond to that?” are just two of the questions that lawyers are asking themselves, said Lucia Savage, a former Obama administration official and the current chief privacy officer for Omada Health, a California startup that helps people manage chronic conditions, like hypertension and prediabetes.

Some regulations—like the Health Insurance Portability and Accountability Act, which governs health privacy; and other insurance laws—protect some parts of a patient’s private life. Human resources departments are required to keep some medical data closely held, but a determined law enforcement agent with a search warrant or subpoena could ultimately get access to patient data.

That will complicate life for the dozens of corporations promising to protect, or even expand, the abortion benefits for employees and their dependents.

A KHN review of publicly available statements identified at least 114 companies that had pledged to maintain abortion benefits or to expand benefits by offering paid time off or reimbursements for travel and lodging expenses so employees or dependents can obtain an abortion. They include some of the biggest, most prominent corporations in the U.S. For example, 54 of the companies—including Starbucks, Bank of America, and California-based Disney and Apple—are in the Fortune 500.

But some companies were reticent to describe what steps they’re taking to protect employees’ privacy. Only 28 firms replied to KHN inquiries about their confidentiality policies. Most declined to comment. “We don’t have anything to share beyond our statement,” said Erin Rolfes, a spokesperson for Kroger, which has supermarkets in 35 states. Microsoft spokesperson Amanda Devlin also declined to share information about how employees would claim reimbursements.

Others were slightly more specific about how their benefits would be administered. Ulta Beauty spokesperson Eileen Ziesemer said the Illinois-based company’s abortion benefits would be managed by the its “health care plan and internal systems.”

Asked whether those internal systems would be vulnerable to a subpoena or search warrant, she said, “Given that each state will be implementing the Supreme Court’s decision to overturn Roe v. Wade and state-by-state laws are rapidly evolving, we are unable to comment on potential impacts at this time.”

Observers agreed that how companies will deal with the privacy implications of extending abortion benefits is uncertain.

“They’re all trying to build this bicycle while they’re riding it,” said Shelley Alpern, director of corporate engagement at Rhia Ventures, a nonprofit investor in reproductive and maternal health companies.

Employers are “going to try and take a punt on privacy,” predicted Owen Tripp, CEO of San Francisco-based Included Health, a startup that offers navigation services and virtual care for employers. Many companies clearly intend to expand benefits. “But how you do it is less clear,” he said. “Getting murkier every minute.”

Some employers will probably retain companies like Tripp’s to manage the benefits for them. Match, the dating conglomerate, has partnered with Planned Parenthood Los Angeles, and all arrangements and information will be routed through that group. In a statement, Match also pledged to take steps to protect employees privacy, saying it will “fight all legal requests or subpoenas for any employee data or user data related to abortion or LGBTQIA+ rights.”

Some startups are broadening their offerings: California-based Carrot Fertility, a company that offers fertility care services, will aid its employer clients that want to expand access to abortion, wrote CEO Tammy Sun.

That should solve some privacy problems, Tripp said. His company administers travel and paid time off for a range of procedures such as bariatric surgery and cancer treatment. A patient can claim those benefits through Tripp’s company, so the employer sees only aggregated information about the amounts paid for patients seeking care. That helps protect information from co-workers.

Still, there are several open questions, said Savage. Among them: How will an employee plan respond to requests from law enforcement? Will the U.S. Department of Health and Human Services’ Office for Civil Rights, which administers health privacy regulations, narrow the circumstances in which law enforcement can request data?

Currently, investigators can get access with a warrant or subpoena and in certain emergencies.

In practice, the uncertainty may dissuade pregnant patients from claiming the benefit, said Larry Levitt, executive vice president for health policy at KFF. “There is no doubt that people being concerned about disclosing an abortion to their employers will limit how often this benefit will be used, even when it’s available,” he said.

That was the case even while Roe was the law of the land, when patients often elected to pay out-of-pocket, rather than rely on their insurance. “The employers offering these abortion benefits are by definition supportive of reproductive rights, but that doesn’t mean employees wouldn’t still want privacy when they or a family member are having an abortion,” Levitt said.

Update, July 1, 2022: This article has been revised to include a statement from Match, delivered after deadline, that details its policy on protecting employees’ privacy.