Why so anxious? Return-to-office uncertainties are stressing us all out, but experts say there’s a simple fix 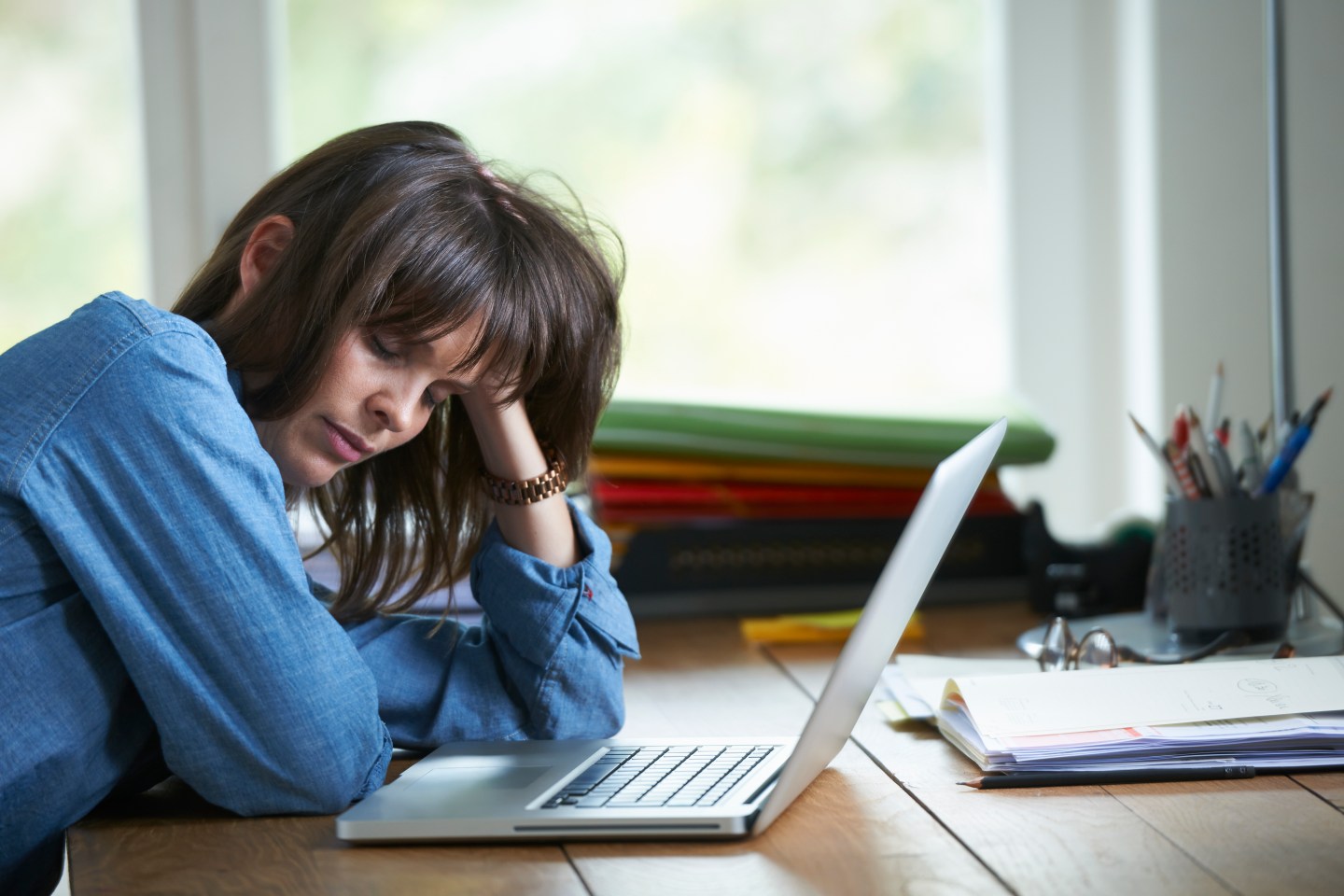 American workers are anxious, and navigating the ongoing uncertainty around management’s return-to-office expectations is only making things worse.

After two-plus years of successfully working from home, employees have gotten used to a certain amount of freedom and flexibility. Without your boss physically in the room with you, who’s to know when you jack in each morning, when you sign off in the afternoon, or even the amount of time you spend scrolling through TikTok (or whatever your midday vice might be)?

Those are just a few of the reasons why people have loved working from home. But as more Americans establish a hybrid work routine, many are struggling to understand employer expectations in this new working world order. What relics from our past work lives remain? And what is thrown out in the rebooting process? It’s confusing—and at times anxiety-inducing.

I witnessed this anxiety and uncertainty firsthand during a recent all-hands meeting—held over Zoom, of course—when a coworker asked whether we’d get summer Fridays this year.

For those who are unfamiliar with the concept, summer Fridays are typically a shortened workday, offered between Memorial Day and Labor Day, when employees can sign off early and enjoy an extended weekend. They became a perk amid the heyday of magazine publishing in the 1960s to boost morale for a certain white-collar set, and free them up to beat the rush to the Hamptons.

I’ve never had a job that offered summer Fridays, so my ears perked up at the question. I remember feeling incredibly jealous when my luckier friends would text to me to meet them early at a bar or park when I was stuck toiling away at a desk in a bland high-rise along the Avenue of the Americas.

But a perk like summer Fridays feels like a benefit of the beforetimes, no? Does the flexibility of our new remote-work era make them redundant? When your boss isn’t sitting in the same room as you, who’s to know if you start happy hour a little earlier on a Friday?

My new coworker’s question, however, is indicative of the confusion many of us feel as we adjust to this new reality where hybrid work is the norm. To me it says: I’m longing to hold on to a semblance of the flexibility I found in the pandemic work-from-home era, but I desperately need to know where the lines are drawn and what’s expected of me now that you also expect me at the office some of the time.

At the end of the day—before happy hours and Hamptons retreats—a lot of this communication comes down to managers.

The root of our anxieties

Over the course of the pandemic, workers have had to create and adapt to new routines—in some cases as a trauma response—and now they are being forced to adapt again. And once again, they aren’t getting much clear direction, says Marissa Porter, an assistant professor of industrial-organizational psychology at Clemson University.

It pains me to think that at 31, I’m so easily unnerved by a change in routine. But as it turns out, it’s just science.

The changes we endured to our daily routines at the onset of the pandemic “resemble the functional impairment consequential to mental disorders such as depression, and place a large number of people at greater risk of poor mental health,” wrote Wai Kai Hou, Francisco TT Lai, Menachem Ben-Ezra, and Robin Goodwin in a 2020 article in the Journal of Global Health. Our lives were turned upside down, and we all did the best we could to right-side them by creating new routines.

In many ways, we’re once again facing a seismic shift, trying to readjust our lives as we enter another phase of the pandemic. We’re going back to work, but nothing is the same as it was when we left our offices some 830-plus days ago. It can’t be: Workers have come to value a certain level of flexibility in the last couple of years. But as Porter says, there are many unknowns in this nascent hybrid era, which causes more anxieties and stress.

“We don’t want the super-short leash in terms of control, but we don’t want to be completely off the leash either and not know where we’re going,” she says.

Worrying about summer Fridays may seem frivolous, but when you’ve been working at your own pace from your balcony for the better part of two years, the uncertainty around whether it’s OK for you to zonk out earlier than usual to soak up some sun in a park might stress you out.

Adding to the uncertainty is the argument some CEOs keep making that workers absolutely need to be in the office to recapture the same level of productivity as before the pandemic.

“That’s just not true,” says Kim French, an assistant professor of industrial-organizational psychology at the Georgia Institute of Technology.

The global economy and labor market surged during the first part of the pandemic, with the world’s output per hour worked increasing nearly 5% in 2020, according to the International Labour Organization. And The Bureau of Labor Statistics reported last month that productivity in the private non-farm sector rose in 39 states and the District of Columbia in 2021.

Experts I spoke with say productivity might just look different now than it did at the height of the pandemic and even than it did pre-pandemic. So if you’re allowed to work from home on Fridays, and your boss won’t know or care that you’ve signed off at 1:45 p.m. to start your weekend a little earlier, does it really matter if your company has a clear summer Friday policy?

So what do we do about it?

The fix is simple: better leaders in the workplace, argues newly minted Gallup CEO Jon Clifton in a letter he wrote to preface the company’s “2022 State of the Global Workforce” report.

“Managers need to be better listeners, coaches, and collaborators,” he wrote. “Great managers help colleagues learn and grow, recognize their colleagues for doing great work, and make them truly feel cared about. In environments like this, workers thrive.”

The solution to employee anxiety ultimately lies with their managers, or at least begins with them. Open, transparent, and consistent dialogue between managers and workers will ensure not only that expectations are clear, but that employee worries and concerns around return to office are addressed.

“The more that you can empower your employees and give them a voice in these decisions is critical,” Porter says.

Leaders assuming everyone will share their vision for hybrid work and understand without question what they expect in return to office isn’t going to fly. One-on-one conversations between managers and rank and file are necessary to get everyone on the same page.

There’s undoubtedly only so much individualization that can be had within a bigger company, but it’s critical managers have these conversations, both for employee well-being and productivity.

“What’s required of managers is that much greater in a hybrid world,” says Steve Hatfield, Future of Work global leader at Deloitte. They need to be even more empathetic. Trying to understand how their people work best is front and center.

Workers have to feel comfortable raising concerns that might be adding to their stress and anxiety, and managers need to listen and address concerns with the support of the company.

“One way I think about this is, we’re renegotiating and redesigning our organizational cultures,” Porter says.

A simple way to do that, she says, are surveys that check in on employee mental health and seek to understand how the process of returning to work is being received. And because how we work and what’s expected are so fluid right now, Porter says, doing these check-ins on a regular basis is necessary.

Organizations that aren’t able to successfully communicate with employees and tap into what’s causing anxieties are likely to struggle with not only return-to-office plans, but productivity and retention.

And while a recession might tilt the balance of power back to the hands of executives, a happy, productive workforce is necessary whatever the economic outlook. Empowering managers to respond to their direct reports’ needs and wants and set their own guidelines can help achieve those goals. Just try not to wrap those meetings before 2 p.m. on a Friday.