From Davos to death threats: The World Economic Forum has become a major target of online conspiracy theorists. Inside its playbook for fighting back 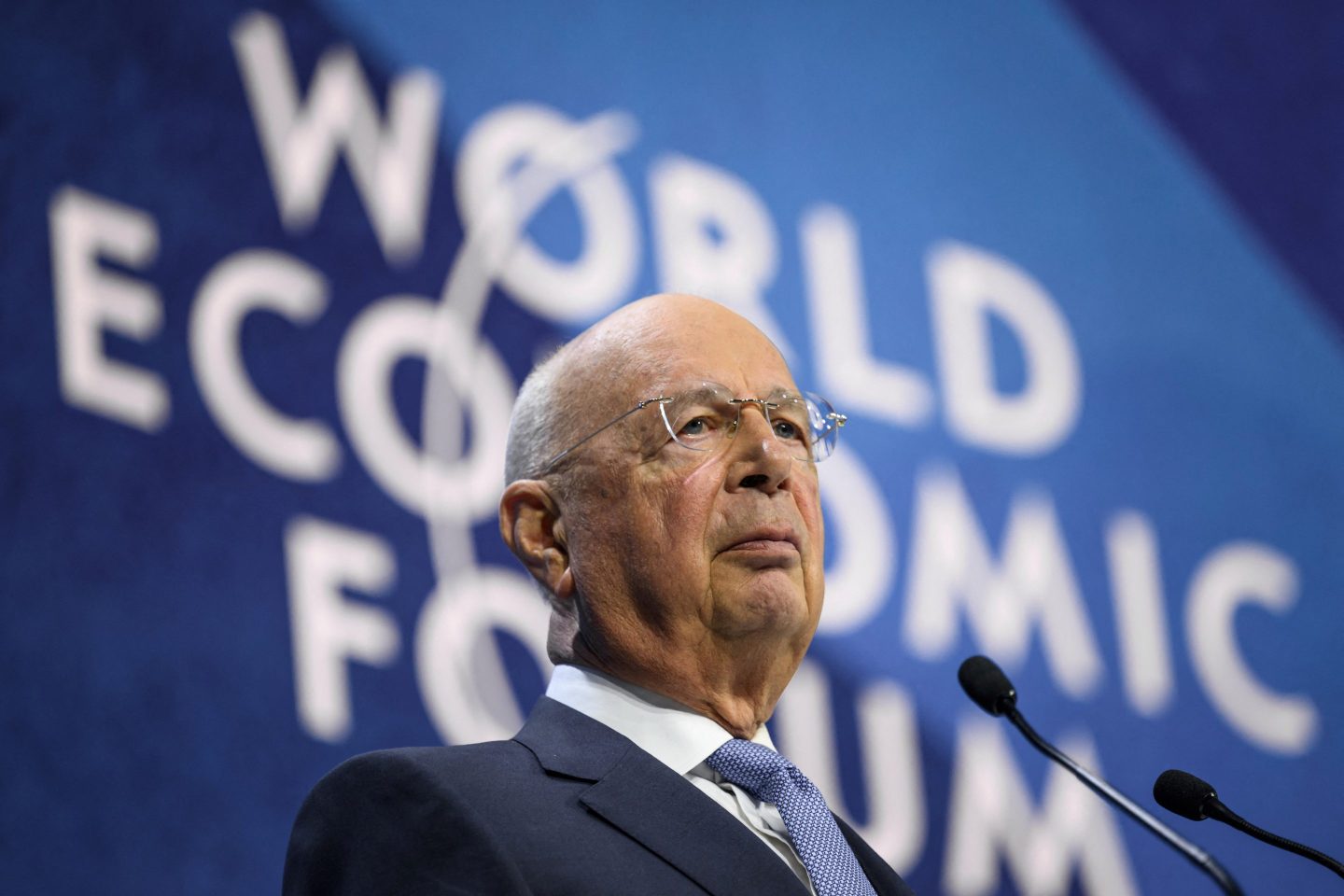 Founder and executive chairman of the World Economic Forum Klaus Schwab delivers a speech in Davos on May 23, 2022.
Fabrice Coffrini—AFP/Getty Images

After a COVID-driven, two-year hiatus—and a further postponement from January—the World Economic Forum finally resumed its annual gathering in Davos, Switzerland, in late May. The event picked up right where it left off in pre-COVID times. Captains of industry, heads of state, celebrities, and billionaires all descended on the posh Swiss Alpine town, along with a smattering of protesters and activists, to discuss new approaches to the world’s biggest problems, ranging from income inequality to climate change.

Online, the gathering also fanned outrage among a far less civil crowd—the rabble-rousers, trolls, and conspiracy theorists who regularly and rabidly accuse the global organization of, among other things, inventing a global pandemic and controlling the world economy. (Read this story for more on how purveyors of misinformation are weaponizing distortion to undermine Fortune 500 companies.)

None of this comes as a surprise to Yann Zopf. WEF has been battling fear, loathing, hate, and misinformation for decades, and the organization’s head of media will be the first to admit that it doesn’t get easier. Zopf joined WEF 18 years ago at another tense moment in time. “There was a strong anti-globalization movement, and there were a lot of very strong and aggressive—I mean, physically aggressive—demonstrations” all over the world, he says during a Zoom interview from Geneva. “But the digital revolution helped us to improve that situation, and I was personally very involved.”

Back then WEF struck critics as a sort of secret society, so the organization took deliberate steps toward transparency. It began livestreaming sessions and set up a booth in Davos to allow viewers to engage speakers. It moved the needle on public perception and helped WEF define itself as a platform for dialogue. “Things improved, drastically, I would say,” Zopf says. “Our social media channels became very important channels to communicate on economic topics and also climate change, on gender issues. And then social media turned sour.”

A few years ago, the organization began noticing bot-like behavior goosing an anti-WEF narrative, insisting the organization was a cabal of elites bent on world domination. And then, WEF’s executive chairman, Klaus Schwab, published COVID-19: The Great Reset. Things have gotten much worse since.

In extreme media, in user forums, and on Fox News, Schwab has become, take your pick: the most dangerous man in the world; controller of the American power grid; architect of global food shortages; and the mastermind behind a plan to install radical plans for forced vaccinations, property ownership limitations, and mandatory digital ID cards. Earlier this month, the nonsense was elevated to the highest levels of the Canadian parliament when Pierre Poilievre, candidate for prime minister, publicly aligned himself with Great Reset conspiracy theorists, declaring that, if elected, he will ban ministers and other top officials from involvement with the WEF.

That kind of mainstreaming of fringe paranoia has accelerated in the COVID era. “For the first time in my career, starting about six months into the pandemic, I was really shocked and concerned about my profession. I had never seen things get so aggressive,” says Zopf. “And it’s not like you can engage anyone in a constructive dialogue. You don’t even know if you’re dealing with a real person or not.”

Zopf describes the escalation in three distinct phases. The first phase of disinformation involved Bill Gates. Anti-vaxxers who have long targeted Gates connected him to Schwab via the Davos summit, which Gates has often attended. Schwab himself has spoken publicly on many occasions about the possibility, or even the inevitability, of humans whose cognition or situational awareness or mobility would be augmented by chip implants. So, the conspiracy-theory propagators began accusing Gates and Schwab of conspiring to implant chips into people via COVID vaccines.

The next phase came around the 2020 elections, in which WEF was accused of orchestrating the outcomes. “And then there’s what’s happening right now, which is visible with the Ukraine conflict,” says Zopf. “We have many indications of pro-Putin, state-backed activity. The purpose, we believe, is to destroy trust in society, to polarize society, and create this kind of hostile environment.”

Choosing when to engage

The responsibility for handling such aggression at WEF is fractured. Sometimes, if it rises to the level of libel, legal gets involved. Often, it’s a matter for crisis management, which falls to Zopf. “It kind of sits between different departments, so a lot of the issue is how do we set up as an organization,” he says. “And I think many organizations are struggling with the same issue.”

Zopf says determining when to engage is difficult. Clearly, an organization with millions of followers should not debunk inane theories from a Twitter account with a few dozen. On the other hand, Zopf says even reputable reporters often call to fact-check nonsense. So his calculus on when to engage is still, by and large, based on intuition. There is one red line, however, which involves physical threats. WEF has received more death threats than Zopf can count—and he doesn’t see all of them because it’s the responsibility of IT to filter them out.

Employee safety and mental well-being must remain paramount. “Obviously it’s quite traumatizing for the staff or others who are not so much in social media when they suddenly see super aggressive messages,” he says. “So the psychology part is really important.”

While Zopf has some experience to offer and some basic rules that he and the team follow, the WEF disinformation playbook is nothing if not dynamic. A few minutes before our interview started, he was informed that there was a protest forming at the organization’s Manhattan offices. WEF is no stranger to protests in Davos. But this was new terrain.

“When you have presidents coming, you have a high-security zone, you have military, police, and all that. But on a day to day? We’re asking ourselves, what should we say to our colleagues?” he says. “Don’t go to the office? Ignore them? Are those protesters peaceful or not? We don’t know. This is what happens when all the nasty stuff on social media spills over into the real world.”