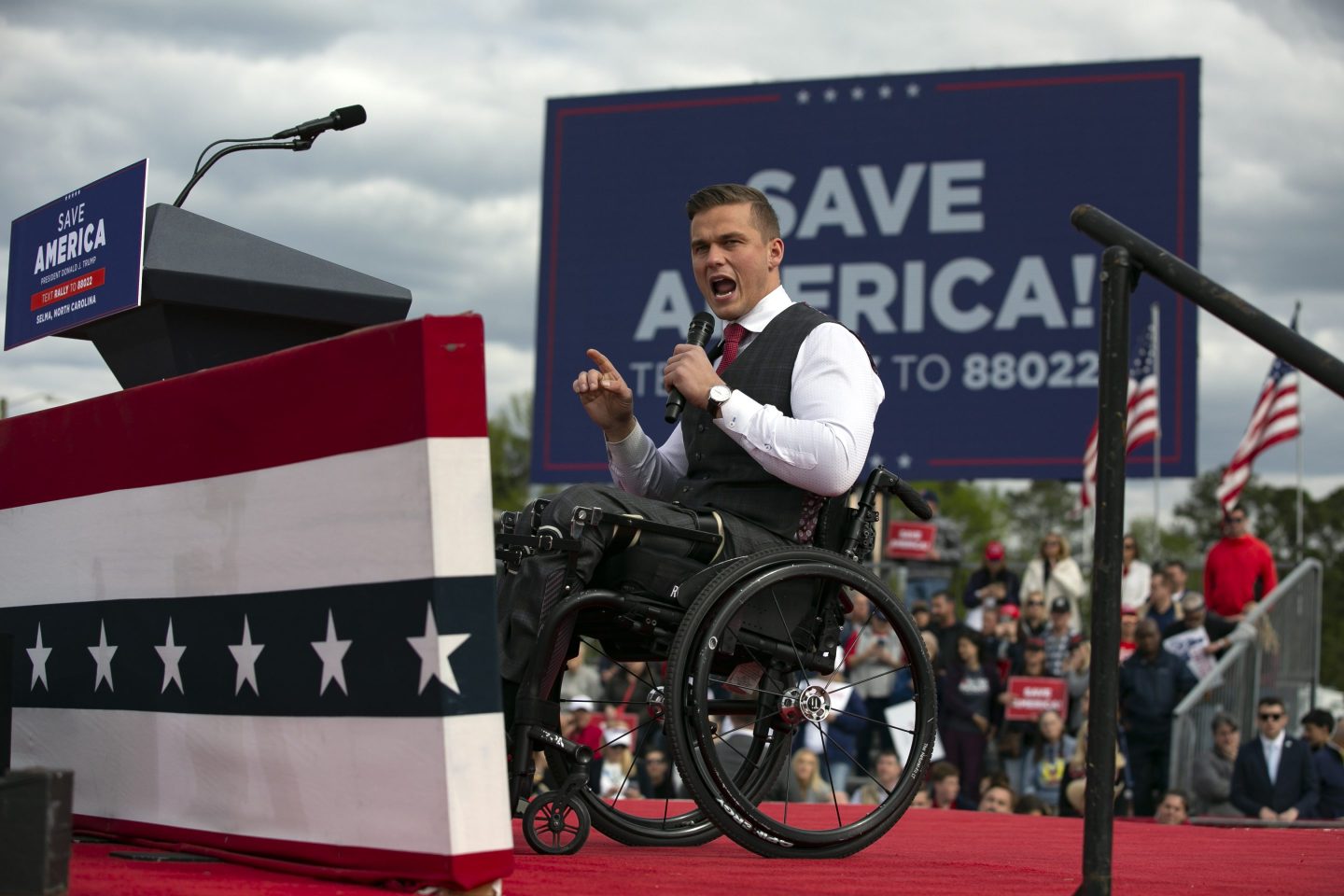 Rep. Madison Cawthorn speaks before a rally for former U.S. President Donald Trump at The Farm at 95 on April 9, 2022 in Selma, North Carolina.
Allison Joyce—Getty Images

Most of the 90-odd guests at Donald Trump’s glitzy Christmas party in Naples, Fla., last December left with the ultimate GOP keepsake: a photo of themselves beside a smiling, thumbs-upping former POTUS.

Crypto’s libertarian flair and the LGB project’s reputed donations to veterans’ groups intrigued the representative, according to James Koutoulas, a hedge fund manager and key LGB backer who said he told Cawthorn about the coin at Trump’s Dec. 3 party.

“He gave me a check a couple of weeks” later, after liquidating some assets, Koutoulas told CoinDesk in a phone call. The check was for about $150,000, he said.

CoinDesk identified Cawthorn’s Ethereum network wallet by cross-referencing the public disclosures with on-chain data and confirming the matches with people familiar with the trades. The public, transparent transaction history indicates that all told, Cawthorn likely lost money on his crypto trades despite early wins.

The wallet received 180 billion LGB tokens (around $160,000 at the time) from Koutoulas’ wallet in a single transaction. “He locked in price earlier,” Koutoulas wrote in a text message, addressing the apparent $10,000 discrepancy.

The transfer went through on Dec. 21.

Cawthorn later predicted LGB’s price would the next day “go to the moon” in a Dec. 29 Instagram comment. When the LGB team announced a sponsorship of NASCAR driver Brandon Brown on Dec. 30, the coin indeed rallied mightily. The next day, Cawthorn sold off roughly a third of his LGB for a considerably more liquid cryptocurrency, ether (ETH), fetching a 94% return in dollar terms (though it’s unclear if he moved that ETH to cash).

It was a sequence of events that would come to haunt the first-term representative. Six months later—after a sea of scandals sunk his reelection bid—Cawthorn’s LGB trades are under investigation by the U.S. House Ethics Committee.

Spurred by allegations of insider trading and a “pump and dump” scheme, investigators are examining whether Cawthorn “improperly promoted” LGB without disclosing his investment in it. (They’re also looking into an alleged “improper relationship” with a staffer.)

Cawthorn formally disclosed his LGB trades on May 27, four days after the House launched its ethics investigation. Short on details, his disclosure nonetheless paints a picture of a savvy trader who cashed out a six-figure profit at just the right time. (LGB peaked on Dec. 31 and is now essentially worthless.)

On closer inspection, however, Cawthorn’s LGB trades do not appear to have worked out “very well” at all. He’s at best close to even; at worst he’s down bad from a mix of taxable capital gains and the bear market slump.

Cawthorn’s team did not respond to multiple requests for comment. A spokesperson told a local paper on Wednesday that the lawmaker is being “falsely accused by partisan adversaries for political gain.”

CoinDesk’s editorial policy gives great weight to the crypto-community value of privacy and therefore requires an overwhelming public interest before revealing the individuals behind pseudonymous blockchain addresses or internet handles. In this case, there is clearly such an interest, given Cawthorn’s position as an elected official and the allegations under investigation.

At this point, Cawthorn has sent just about $142,000 in ETH to Coinbase in three batches, possibly for cash out, because the exchange is where traders convert crypto to dollars. But it’s impossible to know for sure. While his congressional disclosures detail an ETH buy on Dec. 31, they never mention a sale. Then again, they fail to disclose any activity after Dec. 31, anyhow, despite a 2012 law requiring congresspeople to disclose their investments within 45 days of a trade.

Cawthorn’s wallet history documents a series of LGB trades that he still has not disclosed even well after the law’s deadline. That said, it’s impossible to say precisely who controlled the wallet without hearing from Cawthorn himself.

That law, known as the STOCK Act, also prohibits officials from trading on insider information. Cawthorn’s colleagues have accused him of insider trading and pointed to his LGB promotion on the eve of the NASCAR deal.

Koutoulas said he is skeptical of the allegations. “These people are saying that an Instagram [post] equals insider trading,” the hedge fund manager said. He denied that Cawthorn knew about the NASCAR sponsorship when he agreed to buy LGB in early December. He further said Cawthorn’s “to the moon” comment Dec. 29 came after Brown, the driver, had himself teased the LGB announcement.

Regardless, Cawthorn, who sold LGB for ETH (which itself was crashing through January) likely lost money on his $150,000 initial investment; he almost certainly ran up a hefty short-term capital gains tax bill for the 2021 trades. Based on his congressional salary for last year ($174,000), his married status and his $50,000 gain from the Dec. 31 trades, Cawthorn’s New Year’s Eve swaps fall into a 24% tax bracket, experts said.

His 2022 trades from LGB to ETH mix modest gains with heavy losses—at best he came out close to even. It’s impossible to know for sure without seeing his Coinbase trading history. LGB has since fallen to virtually zero, wiping out the remainder of his position.

Capitol Hill insiders were flummoxed when told how Cawthorn’s LGB trades were executed. Most lawmakers put their assets in a blind trust, one former Hill staffer said. While that’s not always the case, that former staffer noted Cawthorn’s history of going against the grain.