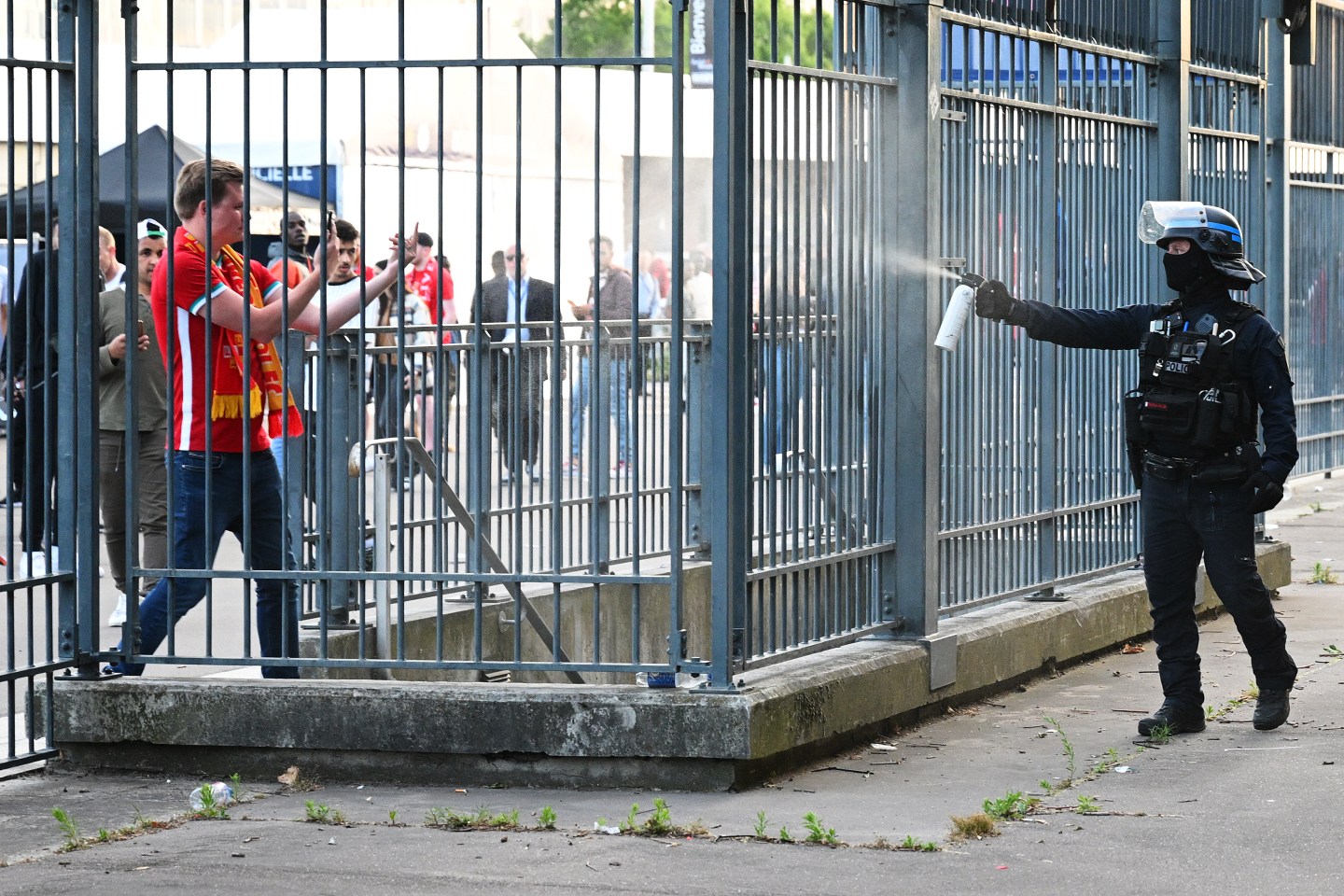 Kickoff for the Champions League final in Paris between Real Madrid and Liverpool was delayed by 30 minutes Saturday as Liverpool fans had trouble getting in—with reports of faulty admission gates and police unleashing pepper spray on them.

Soccer fans, some apparently without tickets, were seen by The Associated Press breaking through security before being tackled to the ground and taken away. One was wearing Liverpool attire, the AP reported.

Social media on Saturday afternoon was abuzz with reports of law enforcement with riot shields and pepper spray, and fans potentially crushing each other in an attempt to get into the stadium. Long lines of Liverpool fans stood outside the stadium 40 minutes before kickoff, the AP reported.

The English football pundit and decorated former player Gary Lineker was on the scene in Paris and tweeted around 2:45 p.m. ET he was having trouble entering from the Liverpool fan side. “This appears to be very dangerous. Absolute carnage.”

Another football journalist, Mark Pougatch, tweeted an account from a Liverpool fan that four out of the five entrance gates were suddenly shut, forcing fans to enter through just one.

Tariq Panja, reporting on-site for The New York Times, live-blogged that thousands of fans were stuck outside “choking on pepper spray” while the opening ceremony got under way, featuring pop star Camila Cabello. He later posted video of French police choking, seemingly from their own pepper spray.

Liverpool Mayor Steve Rotheram tweeted Saturday that the scene outside the Stade De France was “completely chaotic, with a total breakdown of control and communication outside the ground. All relevant authorities must be held accountable for this failure.”

An announcement was made in the stadium that the game would be delayed due to late-arriving fans, about 15 minutes before the game, according to the AP. That delay was later extended by another 15 minutes. CBS’s pre-match commentators, including former Liverpool great Jamie Carragher, said they could not recall such a long delay before for such a crucial match.

Carragher also criticized UEFA for appearing to blame fans for an organizational failure, and brought up the specter of Liverpool’s tragic history with negligence at the hands of football ground administrators. He added that he was worried about his father and his son, who were among the Liverpool fans trying to get in.

In the UK’s worst sporting disaster, nearly 100 Liverpool fans were killed in 1989 at Hillsborough Stadium in Sheffield, England, during the club’s FA Cup semifinal against Nottingham Forest, with reports for years afterward blaming fan violence instead of flawed crowd control, as turned out to be the case.

Sadly, dozens of Liverpool fans had previously died in yet another stadium disaster in 1985, at Heysel Stadium in Belgium, the causes of which remained a subject of debate for years, with the initial criticism of misconduct by Liverpool fans giving way to a more nuanced narrative that implicated organizational failures. The Heysel disaster prompted UEFA to indefinitely ban English clubs from its suite of competitions that ultimately turned into the Champions League, ending a string of dominance that saw English clubs crowned champions of Europe seven out of the eight years between 1977 and 1984, with Liverpool winning four.

A CBS commentator said the Liverpool end was “pretty much” full in the seventh minute of the game, nearly three-quarters after the initially scheduled kickoff.

[This post was updated multiple times to reflect a breaking news situation.]