High-end restaurants are getting creative to fight food price inflation 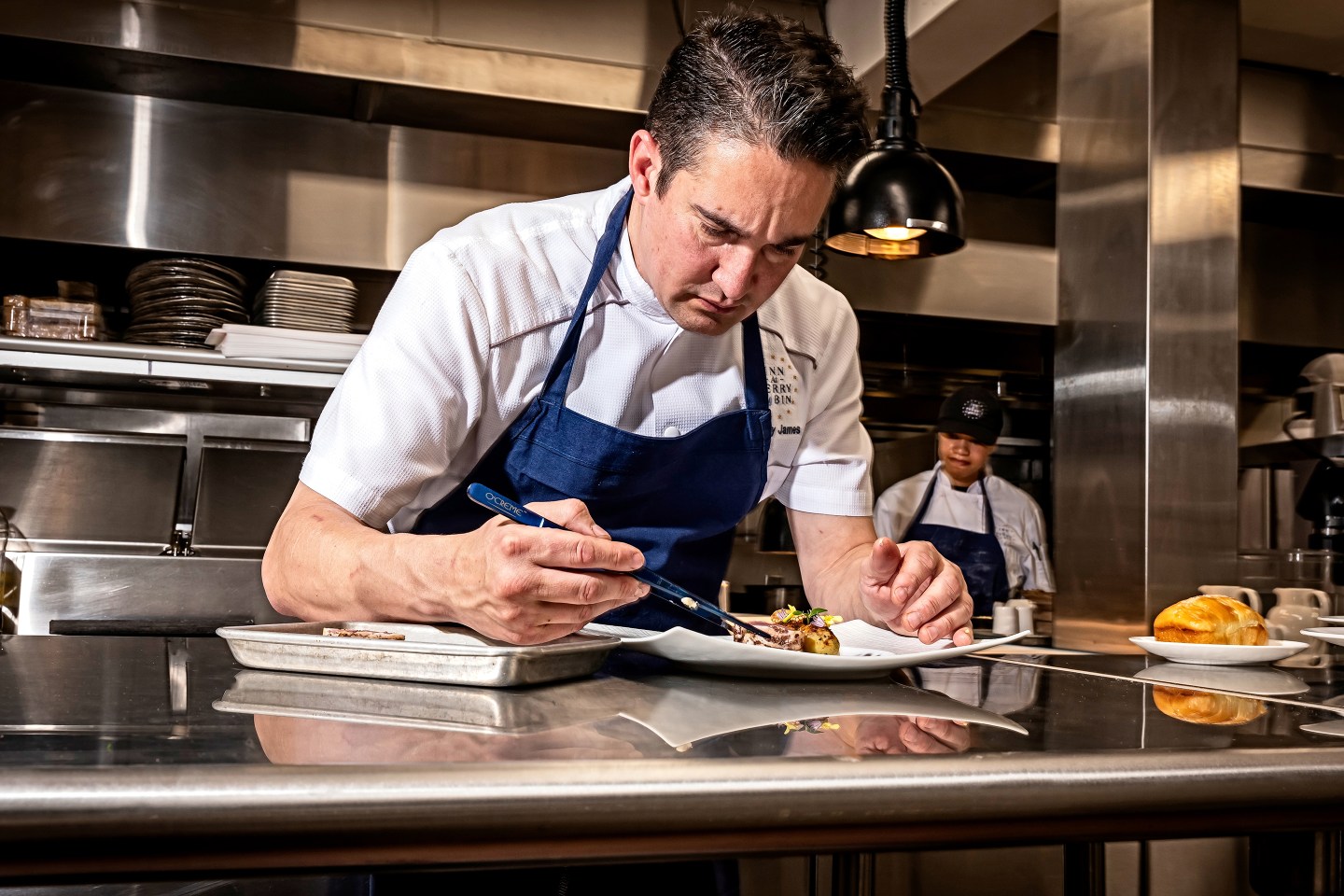 Chef Gregory James plates a dish of dry-aged tuna in the kitchen at The Inn at Perry Cabin.
Photograph by Scott Suchman for Fortune

Snakehead fish looks like a nightmare and tastes like a dream. Chef Gregory James had never heard of the species before moving to Maryland’s Eastern Shore to reinvent the restaurants at the Inn at Perry Cabin, the luxury hotel in St. Michaels. Last spring, two fishermen showed up at his kitchen door with a fresh catch of the fang-toothed cross between a catfish and an eel. Since then, the snakehead has blessed his menu—and his food-cost Excel. “It’s delicious, and a whole fish costs me about $6,” he says. It’s a win for James whenever one of the Inn’s blazered-and-seersuckered diners savors the monster with caramelized sweet potato coins, apples, arugula, and a swoosh of mustard—on a $105 tasting menu.

Around the country, the restaurant business is booming again, but it’s more expensive than ever to be in the game. The reasons are a wheel of misfortune—breakdowns in the supply chain, lockdowns in China, the war in Ukraine, rising labor costs and gas prices, and even good old corporate opportunism. They all add up to serious inflation in the dining universe: U.S. restaurant prices were up 9.2% in March over the year-earlier period, according to Federal Reserve data: the biggest increase on record. Fortunately, resourceful chefs and restaurateurs are employing inventive solutions to outmaneuver stratospheric cost increases—and creating opportunities for adventurous diners.

The trend is particularly pronounced in seafood. “Chefs are pretty adaptive because seafood prices have always been very volatile, but the last two years the upward climb has gotten much more dramatic,” says Sam D’Angelo, whose Philadelphia-based distributing company, Samuels and Son, services thousands of restaurants on the East Coast. D’Angelo expects diners to get acquainted this year with unfamiliar foods from unfamiliar sources, like warm-water lobster from the United Arab Emirates and Pacific Rim red crab. In Manhattan, supply-chain kinks have caviar connoisseurs at Air’s Champagne Parlor dipping their mother-of-pearl spoons into farmed osetra from emerging markets like Italy and Uruguay, rather than eggs from mainstay exporters like Russia or Iran.

At Perry Cabin, crabmeat is James’s bugaboo. Extricating the succulent meat from Maryland’s famous blues requires nimble handpicking. Owing to labor shortages, that meat now costs more than double its pre-pandemic average, making every one of the inn’s popular crab cakes a money loser. Since taking them off the menu would result in a revolt, the strategy becomes “menu engineering,” James says. “You have to find a way to make some of the other dishes look interesting and delicious enough that people will steer away.” So he fries up soft-shell crabs so their slender claws crackle like kettle chips, then sets them in a luminous lagoon of ginger beurre blanc. And he serves tuna and swordfish from nearby market Wittman Wharf, which dry-ages them until they taste like richer delicacies. None of those dishes is inexpensive or inflation-proof, but compared to the crab cakes, they’re bargains. The takeaway for diners: With chefs more fully exploring the sea’s depths, follow their lead instead of paying more for familiar luxury staples.

Carnivores should take the opposite approach to steak, according to Simon Kim, owner of Cote, the vivacious Korean steak house with locations in Manhattan and Miami. “The rib eye, New York strip, porterhouse—you would assume the most expensive cuts went up even higher,” he says. But in fact, status steaks have seen less dramatic price increases than cuts like hangers and flat-irons, in part because home cooks are driving up demand for the less expensive stuff. So go ahead and ball out on that A5 Wagyu tenderloin—even at $39 per ounce, it’s more affordable than usual, relative to its cousins.

The “meaty board” at Cote, where pricier cuts of beef are a relative bargain.
Courtesy of COTE

In Miami, Cote diners are doing just that, in a packed black dining room shielded from curious passersby by tinted windows, where they savor dry-aged rib eye ssam and head-bop to Hall & Oates. It feels like a secret society of umami and magnums. Still, while Cote projects record-setting 2022 revenues well over $10 million at each location, its 10% spike in labor costs and 20% increase in beef budget means it will make less profit. “We’ve increased prices a tiny bit,” Kim says, “but we’re also taking it on the chin.”

Inflationary challenges extend beyond luxury circles. Heavyweight boxer Yahu Blackwell has two championship titles and is looking for more, but says his greatest professional accomplishment was opening a Rita’s Italian Ice franchise in Baltimore in 2017—a tribute to his late mother, a Rita’s fan. While a cup of neon blue cotton candy ice isn’t exactly côte de boeuf, the bulk mixes, sugar, and fruits that go into it are subject to similar ballooning costs. And because Blackwell is a franchisee—he recently added an Auntie Anne’s next door to his Rita’s—he has little leeway to experiment with dishes or ingredients.

So Blackwell has altered what is within his purview: price and marketing. To get customers who paid $3 for a medium ice last summer to pay $7 this summer, he says, “I made my locations an attraction.” On humid afternoons, kids dart through sprinklers spraying rainbow-colored water while the anthropomorphic Rita’s and Auntie Anne’s mascots pose for selfies. Blackwell brings in saxophonists and comedians to entertain the crowds, and when the sun goes down, the movie projector comes out, showing Toy Story and other family-friendly films. Since he expanded events programming, his sales have quintupled, from $30,000 to $150,000 per month. “People don’t mind paying my prices,” Blackwell says. “They know when they come down here, they’re going to spend the day and enjoy themselves.”

This article appears in the June/July 2022 issue of Fortune with the headline, “Gourmet creations to fight inflation.”